On Saturday night I headed through to Edinburgh as my sister Carla, singer and songwriter in TeenCanteen,  celebrated her 30th birthday by putting on an incredible show in aid of Scottish Women's Aid.

The aim of the night was relatively simple; 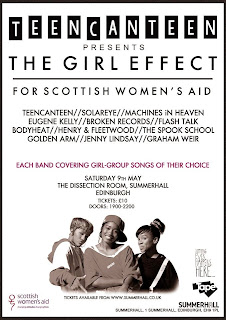 Could my sister really pull this off? An incredible 14-acts in the stunning Summerhall, all the changeovers, tech issues and timings...

The answer, as anyone who was there will testify, was a resounding yes. Everyone embraced the spirit of the night, creating a positive atmosphere from the off that only increased as the night went on.

There was a large queue snaking down the stairs waiting for the doors to open at 7pm sharp and at 7.20pm Carla, Megan from Scottish Women's Aid and the poet Jenny Lindsay told us about the acts playing and the aims of the night and we were off.

It would be impossible to do the night justice, but a full list of the acts and songs covered is noted below. The range of pop music from the 60's through to the present day was fantastic, I thoroughly enjoyed the choice of songs and the way bands stamped their own authority on them.

I would personally like to say thanks and well done to everyone involved in the night - it was brilliant to be part of - like a mini-festival and it raised some much needed money for Scottish Women's Aid.

Thanks to Kat Gollock Photography for the pictures.

The GT's - Chains by The Cookies, Tell Me Baby Why You've Been Gone So Song - Brenda Lee and Jessi Coulter

2 guys in black suits playing acoustic guitars (one of them formerly in OMD) opened proceedings. Their startling ability on the guitars was mesmerising. They extended the songs to use their full 10-minutes, jamming on in glorious fashion.

Bodyheat - I Never Dreamed by The Cookies, We Got The Beat by The Go-Go's

The beautiful flow of I Never Dreamed was an early highlight of the night and a song I'll be tracking down.

Machines In Heaven - Bills, Bills, Bills by Destiny's Child, Nowhere To Run by Martha Reeves and the Vandellas

A huge pulsating electro riff ushered in the second song by Machines In Heaven with singer Davie using a vocoder. The melody sounded familiar - this was the classic Nowhere To Run being modernised and sounding absolutely amazing. I hope they record it. 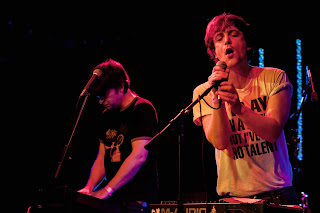 Henry and Fleetwood - Fortunately Gone by The Breeders, Manic Monday by The Bangles

Manic Monday was another highlight of the evening for me with many around me singing along. The combination of bass and synth and male and female vocals was very enjoyable.

Golder Arm - Walk Like An Egyptian by The Bangles, Your Kisses Are Wasted On Me - The Pipettes

Goldern Arm got the crowd going with a romp through another Bangles song before getting the crowd to clap along with the pure pop rush of The Pipettes.

Duglas T Stewart with Norman Blake - That Lonely Feeling by The McKinleys, Nobody Knows What's Going On In My Mind by The Chiffons

A brilliant performance from Mr Stewart, tugging on the heartstrings with his opener before going full on garage with the closer.

Raffle - we then had a raffle with some superb prices generously donated by the acts on offer. Duglas and Norman stayed on to help draw the raffle. 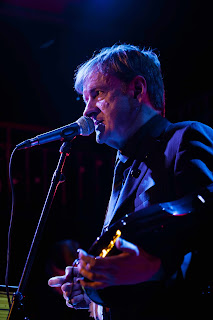 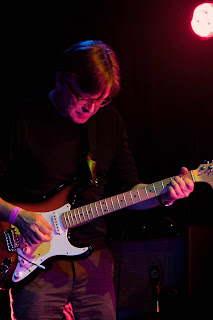 Dave Hook (Solareye) had been bounding around the crowd with a huge grin on his face all night and it transferred to the crowd when he took to the stage. Veronika on vocals sang beautifully over a sample of The Velvettes with Hook adding some smart comeback lines before coming in with a brilliant rap about girl groups, the band then threw in a bit of Betty Boo for good measure, much to the delight of the crowd.

Hook was then extremely generous in his praise of the next song; introducing it as an incredible pop song by a girl group we might have heard of.

I was delighted when he announced it was Honey by TeenCanteen and it was brilliant to hear Stanley Odd remain pretty true to the original but just add their own twist on it, turning it into a duet and ad libbing at the end. 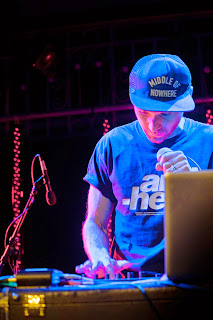 No More Tiger - I Can Hear Music by The Ronettes, I Love How You Love Me by The Paris Sisters

Two gorgeous covers, the first song in particular was a favourite of mine from the night. 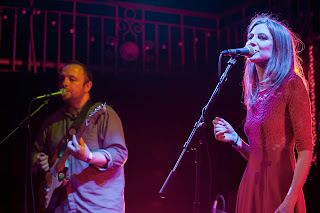 Co-compere Jenny invited the audience to write their favourite girl group lyrics down and then she somehow assembled them into a poem full of humour. Very clever.

The Spook School - Gimme Brains by Bratmobile, I Love It by Icona Pop

The Spook School look like they are still at school. Their delicious punk pop romp through the modern pop classic I Love It was brilliant, causing a spot of pogo-ing. The band looked like they were having loads of fun on stage.

Broken Records - Stop In The Name of Love by The Supremes, Modern Girl by Sleater Kinney

Carla and Sita from TeenCanteen joined Broken Records for a soaring version of The Supremes classic before the band enjoyed toying and playing with the beautiful riffs of Sleater Kinney. Both songs were exceptional from a band oozing with confidence. 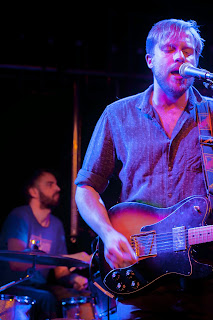 Eugene Kelly with TeenCanteen - My Boyfriend's Back by The Angels, Never Ever by All Saints

TeenCanteen played backing band to Eugene Kelly who was allowed to show that his love of pop ranged from The Angels through to All Saints. The extended version of Never Ever was quite brilliant. 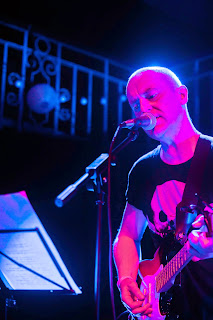 TeenCanteen with Eugene Kelly and Dave Hook from Stanley Odd - Say My Name by Destiny's Child, Waterfalls by TLC, Be My Baby by The Ronettes

A huge cheer greeted TeenCanteen and Carla as she told us the night will have raised well over £3,000 for Scottish Women's Aid with the final total to be announced on Monday.

I imagine it will be more like £4,000+ based on ticket sales, the raffle (they sold out of tickets) and the glitter table manned by Sita and Chloe from TeenCanteen who loved painting people's faces all night.

The closing two songs in particular were exceptional. Solareye from Stanley Odd joined the band for the rap in Waterfalls - a gloriously beautiful pop song.

Carla's voice (which she was really worried about due to doing so much work for the event) sounded absolutely incredible on Be My Baby with the crowd singing along in style. It was a brilliant version of a truly amazing song. 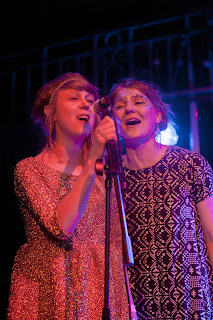 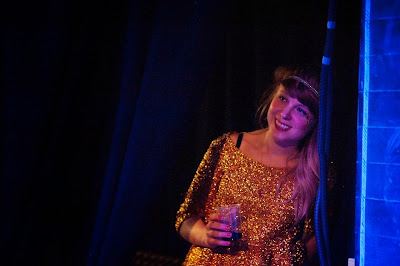