Belle and Sebastian at the Hydro

On Friday night, Belle and Sebastian, one of Glasgow's most celebrated and loved bands, stopped off at the SSE Hydro to play their largest home town show to date to promote their Girls In Peacetime Want To Dance album.

The indie-est of indie bands and their fans had a ball, quite literally.

Backed by the Scottish Festival Orchestra the band played an 18-song set; sprinkled with favourites from throughout their career, the odd obscurity and a selection from their current album.

Belle and Sebastian are no strangers to large venues; they have played the likes of the Hollywood Bowl and Madison Square Gardens - and they took to the stage with confidence - easily transferring their indie and sometimes twee charm to a huge audience. It was an enjoyable and slighty surreal show.

Stuart Murdoch was in great form, bounding down a catwalk that extended into the audience, at home behind a piano, bongo's, guitar or keytar and dancing liberally around the stage.

Nobody's Empire opened the show and fan favourites I'm A Cuckoo and Dirty Dream Number 2 were dropped in early on to get everyone in the mood. 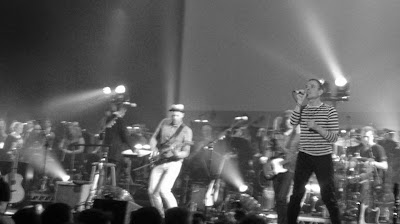 Everyone was in the mood, but just to be sure the Belles had a number of tricks up their sleeves. People were invited on to stage to dance, huge inflatable balls were dropped from the ceiling and in the most surreal moment of the night the band had dancers on stage with huge Toblerone props for Lord Anthony.

Lord Anthony is probably not a song many would have chosen to appear on the setlist for the bands largest hometown show to date; but Belle and Sebastian somehow transformed it to an arena song - using the props, dancers and large screens to create a visual pop art feast.

If You're Feeling Sinister turned this huge arena show into an intimate celebration of stunning indie pop. Murdoch beaming from ear to ear at the crowds reaction. 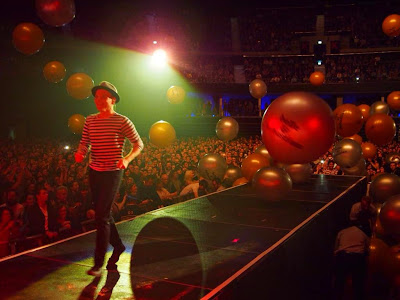 If You Find Yourself Caught In Love was a glorious pop romp with the strings soaring while The Boy With The Arab Strap turned the Hydro Arena into the largest indie disco in the country.

Legal Man was incredible as the crowd danced and hollered the closing section back at the band; 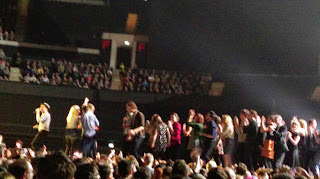 Sleep The Clock Around  is one of my personal favourites from the Belles catalogue and we were treated to Get Me Away From Here I'm Dying and Le Pastie De La Bourgeosie for the encore. 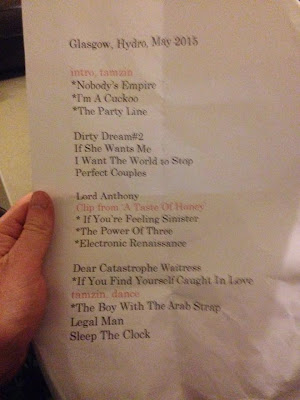