How Long (Change You Into Something Better) by United Fruit

I've heard a few whispers from people on the Glasgow music scene about DIY band United Fruit having a powerful guitar punk pop album that could see the group make significant steps forwards over the next 12-months.

So I was quite pleased when an email popped into my inbox inviting me to check out their teaser track How Long (Change You Into Something Better) which is already earmarked for airplay on Radio 1 this week (indeed this very night on Edith Bowman's review show). 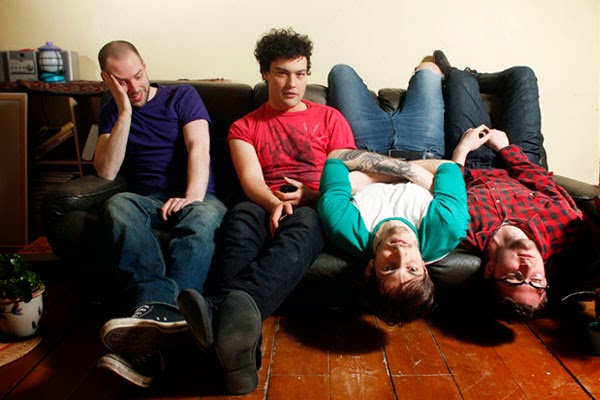 I caught the band last September and was really impressed by their wall of noise, passion and how tight they were on stage, they played 2 songs of their forthcoming second album that sounded superb. Could that translate to record?

There is definitely a sense of pop on this song, on first listen there were some echoes of Bob Mould/Sugar in the choppy guitar chords and throat rasping vocals. United Fruit retain their sense of urgency but this is definitely more commercial/pop for them.

Sugar are not the only American band to spring to mind while listening to United Fruit's new sound. I can imagine this going down a storm on American College Radio - assuming they still play the kind of stuff they used to and not R'n'B!

The chorus is repeated until it is lodged in your head, the vocals are delivered with passion and sneer.

I await the album with interest. United Fruit have been going since 2009 and they've put in the groundwork with their debut album and 5 tours of the UK and Europe. They're not afraid of hard work and they might now have found the sound to take them further.


Will I wait for you?
Well I listen to my heart
It won't last forever
I know we can make this work

I think United Fruit can definitely make this work.