Suede were utterly sensational last night, led by Brett Anderson, a frontman in the form of his life.

A classical intro played as Suede took a dimly lit stage that was full of dry smoke. The band were all dressed in black and they began playing the ballad 'Still Life'. Brett Anderson strolled on to the stage wearing skinny tight black jeans and a white shirt, buttons half undone and sleeves rolled up. He was ready for business.

Anderson then displayed one of the finest frontman performances I have ever seen, his vocals were also spellbinding. Anderson delivered an incredible opening performance of 'Still Life' causing my mate Dave and I to exchange knowing glances.

Anderson looked fantastic, he has always been slim but he looked healthily toned. He shaked and shimmied, jumped, pogo'd, skipped and bounded his way around the stage. In fact he probably spent more time on standing on the monitors at the front or down with the audience than he spent on stage.

Anderson was electrified, he was on another level last night, giving it his all and then some more. I couldn't take my eyes off him for a second. 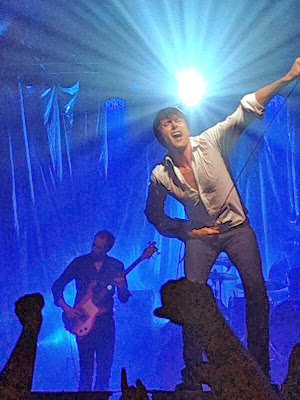 'Barriers' and 'Snowblind' followed before 'It Starts And Ends With You' from their latest album 'Bloodsports' is energetic guitar pop at its best, flowing along with ease. It kick-started an epic 4-song run, leading into 'Filmstar', a superb 'Trash' and a euphoric 'Animal Nitrate'.

Anderson was in truly sensational form, a wide smile broke out at several times, he was singing and performing like his life depended on it. Thankfully he slowed things down for a bit as we were wondering how he could keep it up! He was down on his knees, lying across the stage and his vocals were strong and true. 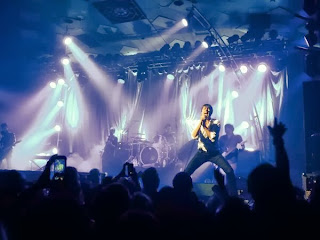 The crowd went wild for 'The Drowners' as Brett made a mockery of his age with his energy and enthusiasm carrying the band and crowd as one.

A sensational fully extended 'The Asphalt World' allowed Anderson to walk side stage. From our vantage point we could see him leaning against the back of the PA, totally exhausted, someone came and put an arm round him and he downed a bottle of water. He came back on after the soaring instrumental and led the song to its conclusion.

'So Young', 'Metal Mickey' and a glorious 'The Beautful Ones' ended the set with the crowd going nuts in response to Anderson's show and just encouraging him to show off even more. He cracked his mic lead like a whip, swung it around his head and over the crowd and eventually let it curl around his body.

They came back on to a huge ovation and played a brilliant 'New Generation'.

I have been attending shows at the Glasgow Barrowland for 20-years and last nights performance by Brett Anderson was one of the best I have seen. I hope they return soon.

He was every bit as good in Leeds too. It's great to see him enjoying himself so much and feeding off the crowds energy. To be honest he's so good now and in such physical shape, it's nonsense to mention his age. People should not be thinking along the lines of a good gig for his age. But the best Suede gig they've ever seen.

I was delighted to hear them do 'Killing Of A Flash Boy', its always been a favourite of mine.