So my sisters band TeenCanteen release 'Honey' via Neu! Reekie Records this weekend. Only it's not a record, it is actually a cassette! Not just any old cassette but a delicious honey scented cassette!

Each tape comes wrapped in lino print on seeded paper which you can plant and when you do, a small patch of wildflowers will grow! A download link is thankfully included for those without cassette players. 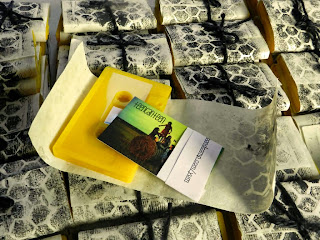 
'Honey' was recorded at the Old Mill Studios in Strathaven and is mixed by Bill Ryder-Jones, formerly of The Coral, now striking out on his own via Domino Records.

'Honey' is a beautiful song, a cross between a polished 60's girl group ballad mixed with the raw edge of punky Throwing Muses style guitar pop.

The melody and lyrics hooked me instantly (not that I'm biased or anything).


He is fun, like the sun, and he never complains
But I'm a mess, I confess, I am more like the rain
He is perfect like a cirlce
And a summer shade of purple


He's the crash of the wave, he makes me misbehave
He's the only one I want, so it pains me to say
That I'm a square trying to fit in a circle
And I am red when I want to be purple
........

The contrast between the slow and considered verses to the raw and fast flowing chorus that has a real sense of freedom is refreshing. There is even a good old fashioned false ending at one point.

There are some glorious harmonies and the lyrics are heartfelt but with a sense of humour.

I look forward to hearing what TeenCanteen have to offer in the future.

hey i really enjoy when you write about teencanteen, i'm from mexico and there's like zero info about them and their music is so amazing,i can't understand half of the lyrics but their sound is perfect. i hope you write more about them and maybe post some lyrics, greeting. -dany