One person/record label that I can rely on to discover, promote and release fantastic independent music is Jen Anderson who runs the small digital label Eli and Oz Records.


Jen has fantastic taste in music and she has released tunes by the likes of Bear Bones, Miaoux Miaoux, Open Swimmer and Kobi Onyame.


If that isn't enough Jen also manages the wonder kid that is Unicorn Kid who is signed to Ministry of Sound Records.


The latest release on Eli and Oz is 'Lofty Ambitions' by a young Edinburgh band called Discopolis who I caught at the Wickerman Festival last weekend. They seem to be capturing the imagination and ears of the right people. I certainly enjoyed their set, which did start a little shambolic but it got better as it went on. 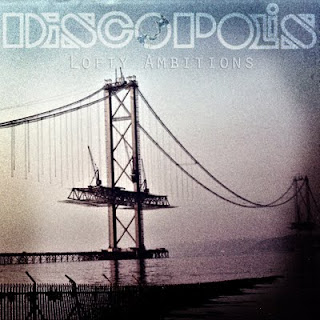 So 'Lofty Ambitions' is their debut single. It's a nice title for a band to launch themselves with, I am a sucker for things like that. The single comes complete with a video that comes across as half art school, half 80's American teen flick with the band breaking into a house party they aren't invited to and ending up everywhere (their music may end up everywhere) - showcasing the bands sense of humour and their mates. Look out for the guy with the white beard from the art school section and the bands mate with the shirt and the can of lager going for it with his dancing and ending up at the feet of the band on his knees, although I also laugh at the guy with the long hair at 2 and a half minutes in. Check it out at the end of this blog. 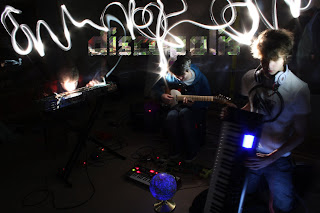 Anyway, on to the music; it is atmospheric, simple enough to sing along to on first listen, dancey enough to emmmm dance to, euphoric hands in the air type stuff as it builds - it's good.


The single starts with the lines;


It's so simple yet so effective, how many of us have felt like that at some point in time?
Discopolis are definitely a promising band that I look forward to catching live again. They have quite a few videos on YouTube that you can check, I particularly like the instrumental When Ghosts Get Angry (the tune and the video - almost a kind of DIY Daft Punk video). Another beautifully titled song Cold Summers Turn To Scottish Winters showcases a different style and the singers vocals, while my personal favourite is Timber Merchants see below.
Posted by everythingflows at 03:46