If you google Gerry Loves Records the following blurb will appear on your screen;


It is a pretty perfect description.


The first release on this tiny DIY label with a great name (a play on Teenage Fanclub's Gerry Love for any non-Fanclub fans) was a little over a year ago, in April 2010, another split single featuring Conquering Animal Sound and Debutant. Since then releases have also included music by; Trapped In Kansas, Yahweh, Japanese War Effort, Miaoux Miaoux, Wounded Knee and Fox Gut Daata. Now we arrive at LOVES005 with the release of a new 7-inch featuring Lady North and Paws.


Before I go on, it is worth going on to the Gerry Loves website where you get to listen to all the releases to date, hopefully before you buy one or two. 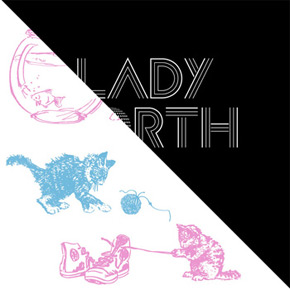 A split 7-inch single reminds me of my youth and Nirvana sharing vinyl space with Jesus Lizard. I still have the 7-inch, it is probably worth a decent amount.


The artwork (Gerry Loves Records like their artwork) is more simple than the previous split 12-inch that came out at the tail end of 2010. Lady North get one side and Paws the other in a hand silk screened cover.


Let's check out what is on offer on the vinyl that comes inside.


Lady North offer 'It's All About Gettin' that Claude Monet'. Their music is described as 'math rock'. Now I'm not quite sure what that means, what I get on listen is evidence of a band that are clearly shit hot and exceptionally tight. The recording sounds pretty live, perhaps because of the fact that it sounds like freeform jazz or a jam at times, really loose, yet they know what they are doing.


You can get lost in this, I imagine it would be brilliant live and I'm regretting not going to the launch night at Captain's Rest earlier this month. 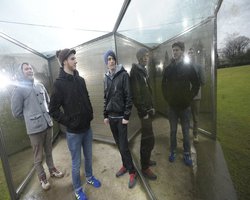 Paws are up next with the track 'Lekker'. I caught them at Sneaky Petes in Edinburgh back in April and I really enjoyed their energetic set and guitar sounds.


If anything, they sound even more ferocious live with 'Lekker' than they did that night in Petes!


'Lekker' is under two-and-a-half minutes of driving guitars and beats. The vocals are distoted to the extent where it is quite hard to make out the lyrics at times (along with the fact that they fly through the song)

yeah we just started something new, but i am still pretty terrified of you
It is a pop punk, fierce love song and over before you know it with a catchy;

Check an acoustic version below;


I look forward to the next release.