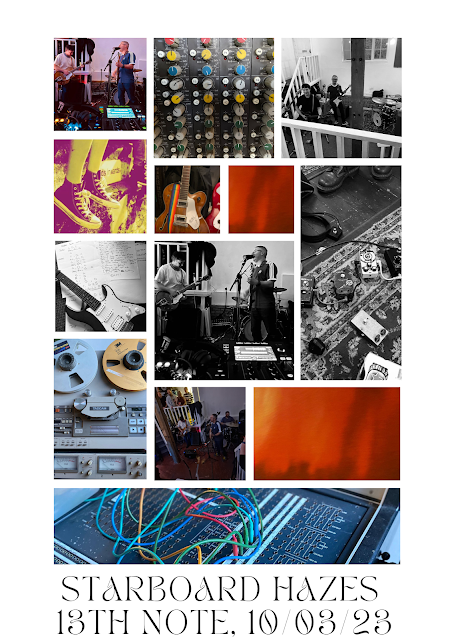 Save the date!
Plans are underway to rehearse, record and release the second Starboard Hazes EP within the first few months of 2023.
Is it just me or does 2023 still sound very futuristic? Time flies and time has become a little weirder since March 2020 when the world stopped for a while as the COVID pandemic took a hold.
However, I am reliably informed that 2023 is indeed just around the corner!
So, to kick things into gear, I've booked the good old 13th Note for the next Starboard Hazes show. Hopefully our second EP will be ready by then. The plan is to catch up to rehearse in January, then record the EP, a few more rehearsals and then play again.
3-songs are definitely ear marked for the EP;
With a potential 4th song called Hung Up (not the Madonna song!) if we have time in the studio. Probably just an acoustic version - rough n raw ... and quick!
Sunshine was one of the very first songs I wrote as a teenager using the D & G chords. It was great to jam it with the band back in October. Jamie's pounding drums, Andy (picking up James guitar) going for Velvets-y sounds on guitar and James (taking on Andy's bass) came up with a great groove.
Yeah! is another old song, very Teenage Fanclub! It's the same 4 chord rhythm groove from start to finish, giving James freedom to do his thing on lead guitar.  Personally, this is one of my favourites to play with the band.
Beta Band Blues is an old idea that always stayed with me. With the capo on 5 I found two chords that worked really well together and I thought they sounded like the Beta Band. The lyrics are pretty simple and I never managed to write more than a verse, so the song is just the same verse/chorus repeated 3 times. I always liked the song/idea though and it was one of the first songs James and I played when we got together. He came up with a brilliant guitar line in between the verses.
When we took the song to Andy and Jamie, they also loved James guitar line and wondered if we could really expand the song into far out Beta Band territory. So when we have jammed, we finish the song and the beats really kick in, allowing James to go all Nile Rodgers on guitar and Andy to underpin everything with a bass groove. When we played live, Ronan from La Chunky joined in on trombone for the second section so we hope he'll play on the recording. And we might add melodica, synth and cowbell - really go for it and have fun.
If we can get the instrumentals down in one day, Andy and I will go back in and record vocals one evening. That worked last time, although I wonder if we might need another evening for Beta Band Blues. But then, Yeah! and Sunshine should be really quick and easy to record, leaving us with a chunk of time for Beta Band Blues. We'll go with the flow!
Our first gig and party was a brilliant night, it was sooooooooooo good to see lots of people enjoying live music and then dancing the night away. I'm delighted to say that Phil Redfearn will be back on DJ duties at 13th Note. We'll see what delights he can pull out the bag to get us dancing again!
It's not BYOB this time, but we've kept the ticket price as low as possible and hope you can join us for some fun. And that's what Starboard Hazes is all about - fun. Fun in rehearsals, in the studio and when we play live.
Tickets, priced at £7, are on sale from Event Brite HERE
It would be amazing to see you there.
Thanks
Murray 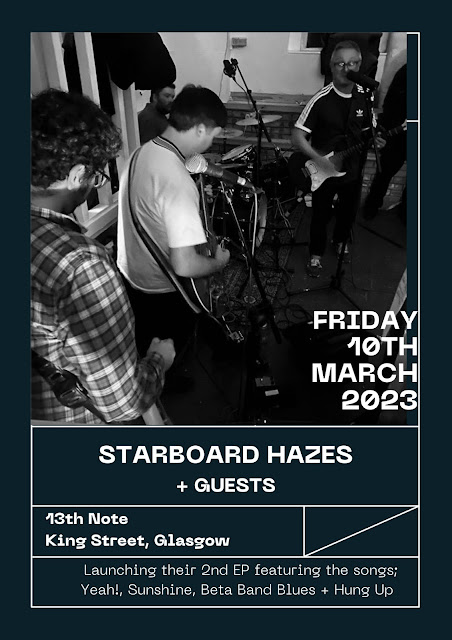