This album is just what I needed. Listening to it washes me with a sense of calmness and very welcome escapism from these extremely troubled times that we're living in.

I've not really been listening to a great deal of music that's been released in 2022. I've been preferring to look back the way. Perhaps, subconsciously, in relation to life in general and not just music. Dreaming of simpler times.

You kind of know what you're roughly going to be getting - but it surpasses expectations. Chiming and jangling guitars reminiscent of The Byrds, horn and string flourishes influenced by Forever Changes, an album by a band beloved by many a scouser. The melodic and dreamy voice, storytelling lyrics.

Bill Ryder-Jones is on production duties and he does a fantastic job alongside Head and his Red Elastic Band. The songs have plenty of room to breathe, the rhythm section grooves nicely, the guitars have loads of sixties style effects, dreamily psychedelic. The little break on Grace and Eddie is utterly sublime.

I'm not going to do a full on track by track review, I'm still basking in this album, appreciating it more with every listen. Here are a few additional highlights from the first few listens though;

Singles Kismet and Broken Beauty open the album with a real sense of purpose. The aforementioned guitars chime. Head's voice sounds alluringly rich and experienced as he sings it's getting cold, can't wait to put my arm around your shoulders.

Kismet fizzes beautifully, the way Head just throws his head back and sings oh, oh, oh , oh as horns rage around him is brilliant.

Broken Beauty is a real gem. Guitar pop soul, the strings and horns rise for the stunning chorus.

People try to put you down

Freedom sounds instantly familiar, is there a little Donovan in the riff? Head's voice is extra soft and gentle, warm and soothing.

Fluke features Head having a little laugh as he sings, the shift in pace at 2-minutes 10 seconds is stunning, things slow back down, Head observing life. Beautiful.

The closing 67 seconds of Gino & Rico is heart warming and spine tingling,

Pretty Child has the energy of Ryder-Jones former band The Coral. The lead guitar is enthralling, the warm acoustic underpins everything, there is yet another glorious break as the song veers off on a delightfully dreamy tangent.

Closing song Shirls Ghost is simply heavenly. A beautiful lush instrumental, the strings could melt or break your heart depending on your mood. 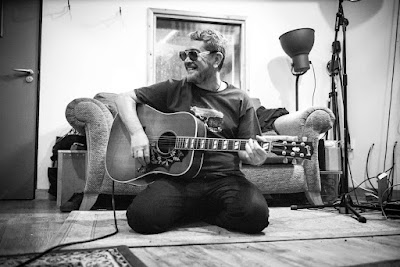