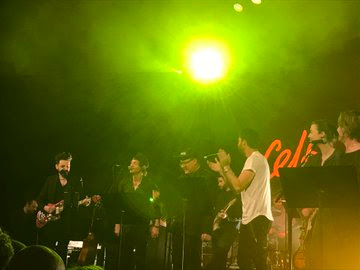 The annual bash, a real highlight in the Celtic Connections calendar, celebrated its 8th birthday by selling out their usual haunt at the Royal Concert Hall

For the first time in the events history, a second night was added, in the stunning Old Fruitmarket in the Merchant City area of Glasgow.

Reports from night one were euphorically emphatic and I was thoroughly looking forward to celebrating my birthday with family and friends to the sounds of Springsteen.

The setting, song choices, artists, band and performances were just perfect. And we squeezed in right down the front at the side to have a brilliant up close view of performances.

Roddy Hart and The Lonesome Fire were on fire. I think the all standing venue made a difference and perhaps they were looser after playing the night before.

The guests who joined them on stage were exceptional; The Rails, Ryan Bingham, Phil Campbell, Lisa Hannigan, Karine Polwart, Jonathan Wilson and Craig Finn. They all brought something a little different, all teased something out of Springsteen's catalogue that made you appreciate his work as a songwriter and performer a little more and every artist showed their appreciation for the songs and artist that will make me go back and revisit songs and albums over the weeks to come.

Roddy Hart used the first half of the show to introduce his guest singers, with each performing a song or two. Phil Campbell chose to play a song called Western Star from Springsteen's latest album - it was stunning and will ensure I check the album out later in the week. 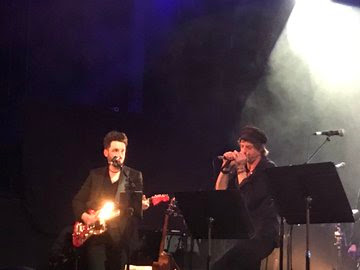 After the interval the show didn't let up. The tech team ensured swift changeovers and the show flowed like ... well like a Bruce show should!

The evening was one long beautiful feel good highlight. Although I guess I should note that the 4 songs I played first thing this morning were I'm On Fire, Brilliant Disguise, Hungry Heart and The Rising.

Lisa Hannigan's take on I'm On Fire was jaw droppingly beautiful. You could have heard a pin drop in the Old Fruitmarket. What a voice! 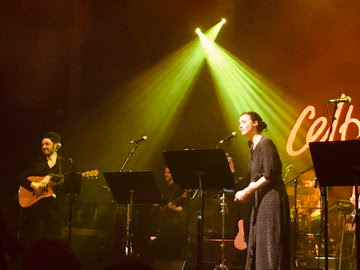 Phil Campbell has an incredible voice and an infectious energy to his performances. He blew me away at the Abbey Road Roaming Roots Revue in 2019 and he did so again last night. I look forward to checking out his new band The Byson Family. His raw, rasping, soulful vocals were perfect for Darkness On The Edge Of Town, Campbell threw himself into the performance.

Karine Polwart led a charing version of The Rising that really got the place going. I found it really interesting to hear her singing in this way, I guess with more ferocity in the music behind her, it really suited her.

I loved the interaction between James Walbourne and Kami Thompson, AKA The Rails. Walbourne tore into his guitar and their harmonising was glorious.

Craig Finn from The Hold Steady is a huge Springsteen fan and his love shone through, he looked super happy to be on stage and taken aback by the audience response.

Look at the setlist below - stunning. Roddy and his band worked the set (see below for full setlist) order brilliantly, building to huge anthems Born To Run, Dancing In The Dark and Badlands. By this point everyone was on stage, playing guitar, singing lead or backing vocals, or just enjoying themselves.

It was fitting that Roddy Hart, the curator of these fantastic annual events, took to the stage with two of his band on piano to deliver a spine tingling encore of Thunder Road. Hart's voice was magnificent, strong and soulful, possibly the best I have heard him.

Last night left me buzzing all day. A truly fitting tribute to Springsteen. 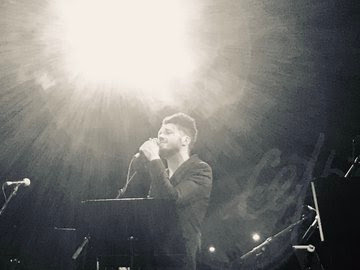 I do hope that the demand for tickets in 2021 will ensure Roddy's Roaming Roots Revue keeps a second night at the Old Fruitmarket. I have to confess that earlier on today I was thinking of ideas what they could do. I thought of Carole King, she'll be 80 in 2022 so that is one to pipeline as a potential for then.

My friend Ian went both nights and nabbed a setlist from night 1. Ian noted that the set list had 3 changes on the second night (which, incidentally he said was best): Ryan Bingham and Lisa Hannigan did different tracks, and Land of Hope and Dreams was dropped. But what a show 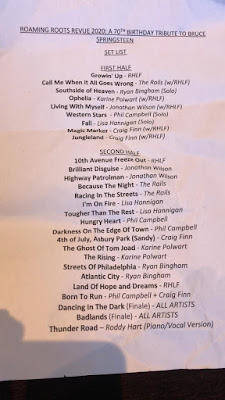 I was at the Concert Hall gig
An absolutely fantastic evening.
Roddy, his band and every guest in top form.Phil Campbell and Craig Finn were revalations and kudos to Karine Polwart for her song choices