Colonel Mustard and the Dijon 5 at Celtic Connections 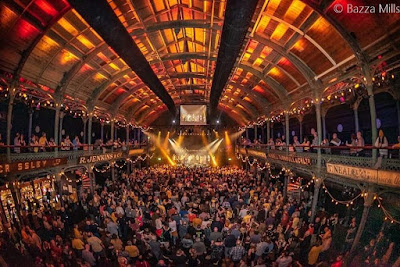 The pubs surrounding the Old Fruitmarket in the Merchant City area of Glasgow were sprinkled with yellow from around 5.30pm on Friday 17th January. There was also the odd disco ball style cap and plenty of people looking like they were dressed for a weekend at a festival rather than a Friday night out in Glasgow.

I wonder how many people have fallen for Colonel Mustard and the Dijon 5 (CMD5) as a result of seeing them at a festival over the last 5-years or so? Difficult to predict, but in that time the band have grown into a staple of the festive scene in Scotland and beyond.

If you have seen them, then it is easy to describe why. And that is why over 1,300 people descended on the Old Fruitmarket dressed in yellow, with painted faces, flowers in their hair, disco ball hats and looking ready for the weekend.

They came to laugh, to sing, dance, smile and forget about their worries for a few hours. And they did just that.

CMD5 are always quick to promote bands and artists they enjoy - see my previous interview with David Blair for substantial evidence. On this occasion they chose to promote my sister Carla J Easton by asking her to support.

Carla and her band played brilliantly. Wearing yellow to get into the spirit of the night, Carla played songs from her Homemade Lemonade (released under the guise of Ette) and Impossible Stuff albums, along with new material. Get Lost from the new songs is possibly my favourite song she has ever recorded. And she brought her pal Stina from Honeyblood on for guest vocals on new song Weirdo. It was a polished and confident set and I look forward to seeing what 2020 brings. On to the main act. I never did get round to counting how many people were on stage with CMD5. I was quite simply too busy enjoying myself.

Opening with International Sex Hero and going straight into festival favourite Dance Off, the Colonel and his merry band of yellow heroes had the place bouncing from the off. They barely let up, they seemed to just keep the beat and the groove going from start to finish. 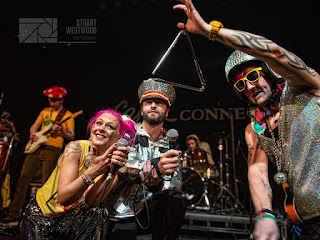 The band have so much positive energy it is unbelievable. New songs worked well; Disco Colin and the current single G.T. mixed well with the old classics.

Cross The Road is a FESTIVAL CLASSIC and even though it was packed we did manage to cross the road.  Dance Like Nobody's Watching might be the next festival classic, while Gay Icon took the roof off the place. At some point in all of this David Blair crowdsurfed - at least twice. 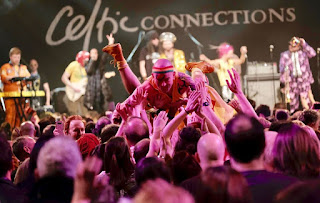 Anthems like Peace, Love and Mustard demand crowd participation, smiles, laughter, high fives .... and all round good feeling. These Are Not The Drugs You Are Looking For is one of my favourite songs from the last 5-years, like the Beta Band produced by Andrew Weatherall, it is so clever, so funny, so socially conscious, so bonkers brilliant.

There was time for one more, the surging pop of Ginger Girl had everyone with their hands in the air singing the chorus. The band quickly played a little bit of How Many Many's and Capturado and sent everyone off into the night with smiles. What a night!

Those with energy stayed to dance to DJ Amy Lame from 6Music.

Roll on the summer. And to Celtic Connections bookers - can you book them now to brighten next January please?! This is a special, special band who can transport you into a good place and make you forget your worries and the state of the world for a couple of hours. 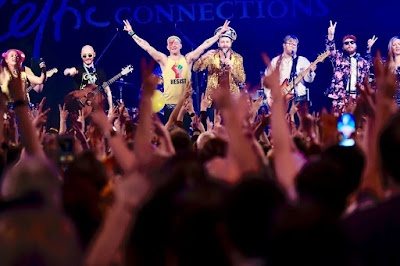