Cover version of the month #33


The Pretenders cover The Kinks

Last month Gerry Love from Teenage Fanclub posted a link to The Kinks song Stop Your Sobbing. I checked it out immediately as I always thought it was an original song by The Pretenders.

So this is yet another cover version of the month blog about a song I have learned something about - not only that it was indeed originally written and recorded by The Kinks, but that Chrissie Hynde from The Pretenders ended up dating Ray Davies and having a kid with him. Has any other cover version led to that?! 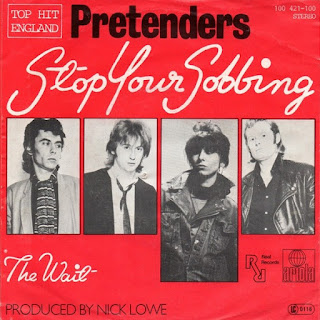 In actual fact the song originally appeared away back on The Kinks debut album Kinks in 1964. Quite why this gem never appeared on any of The Kinks compilations I bought when I was younger is a mystery - then again, they are not short of songs to choose from!

And it really is a gem. In a little over 2-minutes The Kinks tell a story, pack in hooks, sing in beautiful harmony and sound sublimely cool.

Ray Davies voice has a sense of empathy and concern, removed from the rocking singles that basted them to the top of the charts, yet just as soulful.

Fifteen years after the original The Pretenders burst on to the post punk scene in 1979 with their cover. They inject an extra sense of urgency and as with some of the other covers I have blogged about, the switch from male to female lead vocal (or vice versa) brings a new dimension.

The Pretenders extend the song by introducing an instrumental section. Hynde's vocals are exquisite, the production is pure, the chiming guitars sound like heaven. I do prefer The Pretenders version, they do find something extra in the song.