A number of things meant that I couldn't make it to Electric Fields this weekend. It was the first year in as along as I can remember that I haven't attended a summer music festival!

Reports from fellow music fans and from bands/artists I know that attended the festival have been very favourable and it is pleasing to see Electric Fields developing and improving year on year.

I look forward to getting back into the festival saddle in 2018.

Previous guest blogger Gordon Reid was there and was happy to report back.

Scotland has a fine tradition of music festivals. TITP in its heyday ,  Connect , Rockness and Wickerman have all come and sadly gone. Belladrum is now the grand old lady starting in 2004 , TRNSMT the new kid on the block in its debut year and Electric Fields the young upstart growing , changing and adapting to its place in the calendar. We were there for the opening year 2014 and decided on another weekend visit to see how things had moved on.

**other festivals are available**

Set in the grounds of the picturesque Drumlanrig Castle near Thornhill it has grown from a single day 2 stage small affair into a 2 day, 5000 capacity small/medium festival and it has done so without losing any of its original charm. Large well spaced car parking area with a camping site that has been well set out (could do with more lights on the walkways after dark) and an arena large enough to have areas to chill out in (something TRNSMT really lacked) while still being compact enough that everything was easy to find and get to and from quickly. 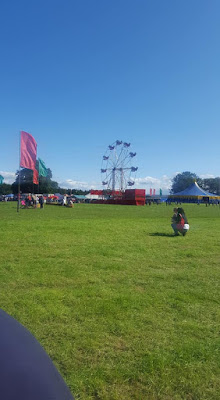 Food and drink was priced as expected and while I found the choice of vegetarian food a little limited I found a pizza stall so I was quite content with my lot. Varied drink available including what looked to be a specialist ale bar, they also had dark fruit cider so the wife was delighted. I got the feeling that that growth of Electric Fields is connected to Wickerman calling it a day as we met a lot of familiar faces from Dundrennan in the crowd. There were plenty of young kids present over the weekend and there seemed to be a few things for them to do as it can be hard to keep their attention with just the music. It’s always great to see kids at these things as they will be the future for music in general and festivals in particular. I honestly couldn’t find a real fault in the set up and organisation of the event and that might be a first for me, of course the fact that the sun shone all weekend might have helped! 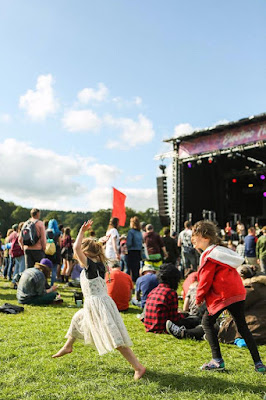 So having arrived,  got our tent set up , air mattress blown up and bed sorted we wandered up to the arena and the music. First band we wanted to see were Nieves and we trooped into the tent just before starting time at 3. They had really changed their sound and look since last time we had caught them. Much heavier and less laid back than we remembered them. I made my way to the front of the stage to check it out. Yeah the new look and sound wasn't that surprising as they had switched time slots with SAVAGE MANSION,  a Glasgow 4 piece. One of the band had a superb pair of sideburns and the tunes were pretty decent. They are playing The Old Hairdressers on Oct 7th if you are around. This threw our carefully planned schedule off track and we had to go get food and missed the band we went to see but it won’t be the last time we catch Nieves.

One well fired cheese and tomato pizza later we were back in the tent to see THE CALM FIASCO, another Glasgow 4 piece and one that we have seen quite a bit of. They looked a little nervous as the tent was quite empty but they had no need to be as the place began filling up quickly once they got going. Highlights were lead singer Del Morin paying tribute to Dizzee Rascal by covering Fix Up Look Sharp strutting about the stage rapping to the amusement of the other band members. They brought their set to a close with Just Don’t Care Any More and left the now full tent shouting for more. Enthusiastic and clearly enjoying something that they are doing well they have a gig coming up at The Art School on November 18th and tickets are going fast. I'd encourage folk to give them a try as you won’t be disappointed.

We took our first trip to the main stage after this to see PETER HOOK and the light. There was something strange about seeing and hearing Hookie as a lead singer doing New Order / Joy Division stuff and although I enjoyed the sing along it just didn’t feel right. I know that they have issues with each other and have said never again but I hope one day that Bernie and Peter manage to bury the hatchet or at least put up with each other long enough to be on stage together again. 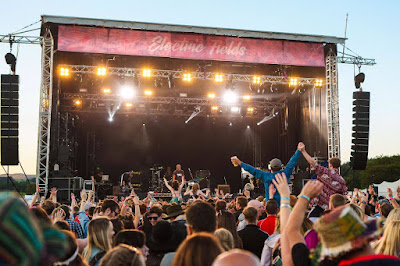 The temperature dropped to bloody freezing about this time and we got ourselves a warm drink and headed back down to the tent where we discovered our brand new air mattress had a puncture and we would be spending the night sleeping on the ground. Heidi did her best to cheer me up by informing me that at least the ground was soft. She’s lucky that she is pretty. At 30 I would have just got on with it but at 50 I’m getting too old for this shit.

A cold night and hard ground made a trip to Dumfries for a new air mattress an absolute necessity so after making breakfast we made the 45 minute round trip. Once again I managed to get stage times mixed up so that we only just made it back in time for MEDICINE MEN and we were glad that we did as they were in my top two acts of the weekend. A heaving tent bounced along with every song and they almost blew it all away when finishing the set with Out Of The Light. Stop reading this and go find it on YouTube,  I’ll wait. The sea of smiling faces was fantastic to watch , people high fiving strangers as they sang the chorus at the top of their voices. Medicine Men are certainly going places and they are picking up speed on the journey.

Next up for us were THE BEAT and once again it was a chance for all us older folk to sing our hearts out to songs from our childhood ( I used to laugh at my parents for this ).  I’ve missed the Scooter tent from Wickerman so it was nice to have a little bit of ska in there.

We then had the “London bus” effect as 3 bands we wanted to see all overlapped. We had to leave before the end of The Beat to make sure we got into the tent for CRASH CLUB. We got lucky as it was rammed with bodies , it felt as if everyone at the festival was in that tent and they were treated to a superb set from the best Scottish Electro-Rock band out there. The ground was shaking and reminded me of younger days long since gone in the slam tent at T. The music screamed in your face as they lifted the crowd up , let them dangle on the edge and then threw it all back in the mix as they took off again. For me they were the star spot of the weekend and if you haven’t seen them yet then try to do so , you won’t regret it.

We missed the last 10 minutes as we needed to eat and wanted to catch FATHERSON. The boys from Kilmarnock headlined the first ever Electric Fields and have gone from strength to strength since then. They looked delighted to be back and it feels like they have been touring constantly on the continent.

We stayed at the main stage for GLASS ANIMALS. Heard a lot about them but I couldn’t see what the hype was all about however Heidi thought they were amazing. She knows her stuff so we will give them another try next time they are north of the border. I had the same with JESUS AND MARY CHAIN , I was really looking forward to them but it just felt flat to me. In both of the bands defence I was cold and tired so it was probably the mood I was in and the way I was feeling. I didn’t stay for DIZZEE but Heidi did and said he had the crowd eating out of his hand. Everyone bouncing about and it was a cool way to bring the weekend to an end.

Electric Fields has definitely found its place on the festival circuit but now comes the hard part. Does it stick or twist? Is it the right size or will they try and get more bodies through the gates? I’d like to see it stay roughly the same for now but that’s not my call. I hope they make the right one...... 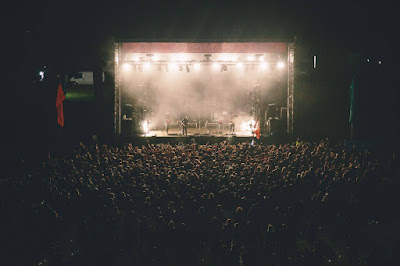 Pic from Electric Fields Facebook
Posted by everythingflows at 12:52