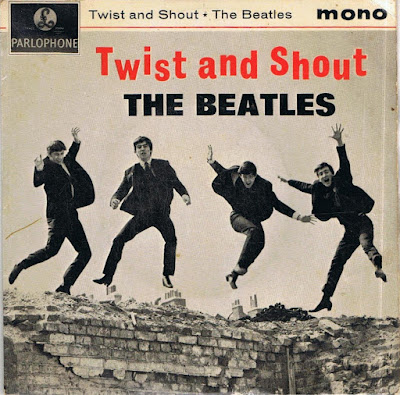 The Beatles version of Twist and Shout closes their debut album Please Please Me in an absolutely show stopping way. Nothing could follow it.

Any fellow fans of The Beatles (that haven't already) should track down a copy of Ian MacDonald's epic Revolution In The Head that digs into the recording of each Beatles song in chronological order.

MacDonald's research and findings are staggering - to read through The Beatles catalogue and learn about their experimentation, mistakes and learnings is absolutely fascinating. And I particularly enjoyed reading about the recording of The Beatles debut Please Please Me that was recorded from start to finish on 11th February 1963.

By the time they reached Twist and Shout, Lennon knew he only had one shot at producing the raw, rasping, soulful vocal that he had brought to the song through his time playing in clubs from Liverpool to Hamburg.

The energy The Beatles pour into the song is outrageous. Lennon pushes his voice to the limits from the off, listen to him going for it and stretching it to breaking point.

The Beatles push it even further, the song breaks down at 1 minute 9 seconds and then the band egg each other on to scream, the beat rises with their voices and they go back into the song.

By the time they get to 2 minutes and 7 seconds they are pushing themselves to the brink, foot stomping their way through 3 repeated lines that must have sounded like the most exciting and sexy music ever back in 1963 - it still stands up today.

The band then scream to conclusion - song done, album done, all in one day - exhausted, elated.

The band attempted a second take but Lennon's voice was shot, he had nothing left to give and it was abandoned. Take 1 is the version on Please Please Me, the only version.

I love the version from The Royal Variety Performance in November 1963 where Lennon introduces the song by asking will the people in the cheaper seats clap your hands and the rest of you if you just rattle your jewellery. Rumours are that he wanted to say rattle your f**king jewellery.


Check this outrageous version from Melbourne in 1964, no-one was telling singers to look after their voices in those days!

The song was written by Phil Medley and Bert Berns (later credited as Bert Russell) and recorded by a band called The Top Notes with a certain young Phil Spector (pre Wall of Sound) producing. It flopped and it does sound pretty lame and terrible if you take the time to check it out HERE.

The Isley Brothers took it and made it into a hit. And what a hit - it really is a brilliant rock n roll/soul song to dance and shout to. Aptly named! Check it HERE.

And I couldn't write a blog without including the 'version' that introduced me to the song. Matthew Broderick miming to The Beatles on a carnival float in the 80's classic Ferris Bueller's Day Off.