You’ll Never Walk Alone by Gerry and the Pacemakers 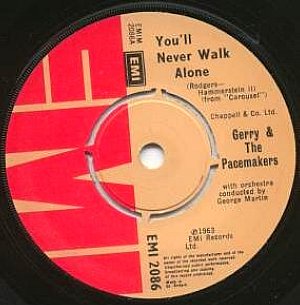 Last week, after an incredible 27-years of fight, determination and patience, justice was delivered to the families of the 96 Liverpool supporters that sadly lost their lives at Hillsborough in 1989. The truth eventually came out, breaking through ridiculous lies, deception and cover ups.

I was moved to tears as the families came out and sang You’ll Never Walk Alone in front of the court - They never walked alone, they remained united and they had the backing and support of Liverpool, the club, the city, players and management (past and present) and fellow supporters from teams all around the world.

I was moved again when there was a mass vigil in the centre of Liverpool and everyone came together to sing You’ll Never Walk Alone.


You’ll Never Walk Alone is my cover version of the month.

Yeah this is a cover, I imagine many people must think of this as a Gerry Marsden/Gerry and the Pacemakers original. This remarkable song, that has taken on a hymnal like quality for supporters of Liverpool and Celtic, was originally a show tune in Carousel, a 1945 Rodgers and Hammerstein musical.

In 1963 the Liverpool beat combo Gerry and the Pacemakers released the song as a single, taking it all the way to number 1 for 4-weeks. Gerry Marsden himself has said that DJ’s at Anfield used to play the top 10 culminating in You’ll Never Walk Alone, but when it dropped out the top ten fans just kept singing it.

The song is just timeless, Gerry’s vocals, the beautiful melody, the swelling strings as Gerry sings;

The chorus is incredible, soulful and soaring and it comes back immediately, the double impact is sensational, just as the first chorus slows, the strings and Gerry come back in to lift the song to even higher heights; capable of moving listeners to punch the sky, be moved to tears, or both and much, much more. The dramatic pause in the final line, almost like a break in Marsden’s voice just adds to the overall effect.

The lyrics are simple, yet you can’t get much more meaningful and soulful. Sometimes four words are better than three - with hope in your heart and you’ll never walk alone.

I’ve spoken about the impact of the double chorus, but even a single chorus has an extra edge to it thanks to the clever way walk on is repeated and then the same simple trick is used with you’ll never walk alone. So simple, so effective.

The song is over in only 2 minutes and 48 seconds, under 3-minutes of beautiful celtic soul.

Many others have also recorded versions of You’ll Never Walk Alone, including Elvis, Johnny Cash, Sinatra, Aretha Franklin and Kevin Rowland. I, for one, don’t think anything can top the Pacemakers version, although I don’t blame other artists for wanting to try their hand at such a beautiful song.

This is the original from Carousel;

When you walk through a storm, hold your head up high
And don’t be afraid of the dark
At the end of the storm, there’s a golden sky
And the sweet, silver song of a lark

1. You've Lost That Lovin' Feelin'
2. Going Back To My Roots
3. Nirvana play The Vaselines
4. Slip Inside This House
5. Top 10 covers by Teenage Fanclub
6. Only Love Can Break Your Heart
7. Time For Livin'
8. Sound and Vision
9. All Along The Watchtower
10. I Am The Walrus
11. Guiding Star
Posted by everythingflows at 14:29