Manic St Preachers at the Hydro

I featured a guest blog by my friend Joe recently. Now it is the turn of his lovely wife Emma.

Emma is a huge Manics fan and after her enthusiastic posts on social media at the weekend I thought I would ask her to follow Joe with a guest review. Her passion and knowledge for the band really shine through.

Maybe I should turn this into a regular Mr & Mrs feature!?

I have been a Manic Street Preachers fan for over 20 years which is a little bit over half my life. I have seen them live in various venues over the years. I was excited to receive tickets to the Hydro gig as a Christmas gift from my husband. The gig also fell on the weekend of our wedding anniversary which was a good way to celebrate.

To be honest the first time I heard the Manics I didn’t know who they were but I knew I liked their songs.  Watching Top of the Pops was an institution in our house and in the early nineties whilst still in primary school I was learning to play guitar (classical and very badly) and I remember seeing scruffy men playing bouncy guitar and later I learned that it was the Manics playing Motorcycle Emptiness. In 1994 I began to buy the NME every week and started to read more about the band. I never really went for the boy bands, guitar music was what I was raised on. I remember hearing of the disappearance of Ritchie Edwards on the Radio One news before school one morning and then following the stories in the NME in the weeks and months that followed. I was 13 twenty years ago when Everything Must Go was released and obsessed with music saving up dinner money to buy albums.  It was an album that meant a lot to me and that still does. To hear it played live in full was something very special. 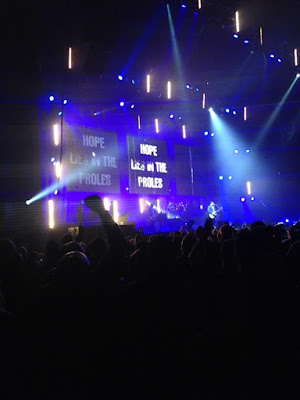 Saturday nights gig at the Hydro was not only the best Manics gig I have ever been to but my best live gig experience of all time. When the band walked on stage and launched into Elvis Impersonator my heart sang such is the emotional connection I have to these songs. I am one of those annoying people at gigs who like to scream out the lyrics whilst pumping the air with my fist and there was certainly plenty of those opportunities at Saturday’s gig. James Dean Bradfield’s voice was liquid gold perfection and he and Nicky Wire were in good humour bouncing off each other. Nicky had about four wardrobe changes but my personal favourite was the white Captain’s hat.

The big hits like A Design For Life, Australia and Kevin Carter were everything you would expect them to be. There were scissor kicks from the band, singing and bouncing from the audience. For me though the highlights of this gig were the opportunities to hear the album tracks and slower songs played live. As usual the Manics visuals were spot on especially for these tracks. Small Black Flowers That Grow In The Sky was hauntingly beautiful. The crowd was obviously delighted to hear The Girl who wanted to be God and Removables and these became snarling sing a longs.

For me a real highlight was Interiors however not all of my section of the crowd seemed in agreement with this. I love Further Away and have included it on a few romantic mix tapes in my time as I think it is a song which describes being in love well. The finale of this section of the gig was a euphoric rendition of No Surface but All Feeling with included the surprisingly beautiful release of streamers in the colours of the Welsh flag by the clearly emotional James Dean Bradfield. 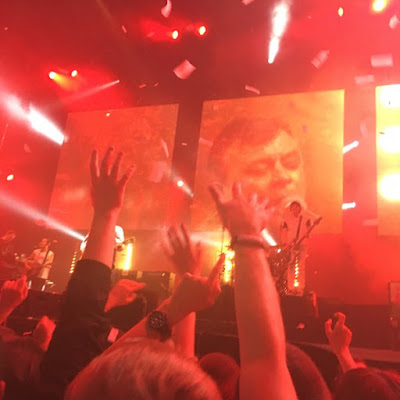 The second section of the gig was rareties and hits. Highlights for me were hearing the cover of Raindrops Keep Falling On My Head from the Help album which James described as the time the Manics  got “swept up in that thing called Britpop”. Motorcycle Emptiness and You Love Us were their usual guitar rift driven sing along jump about greatness. Roses In The Hospital is my personal favourite Manics song and was so powerful it inspired me to actually leap into the air despite being 22 weeks pregnant.

The only song of the night that I must confess I never wish to hear again in my life was 2013s Show Me The Wonder.  Sorry boys the wonder escaped me entirely in response to this dire ditty. However the rugby boys behind me seemed to find it the highlight of the night so each to their own. The showed ended with If You Tolerate This… . The chat on fan forum sites had expressed doubt as to how this would work as a show closing track but it was really moving especially with the pink tissue paper blown into the crowd to represent cherry blossom. 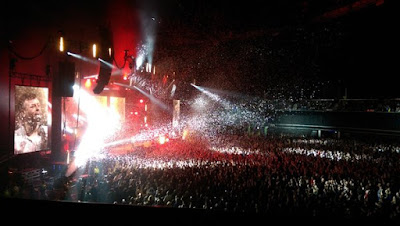 It was a fantastic gig made all the better for me (don’t hate me) when I got to meet James Dean Bradfield over breakfast the following morning. He was a lovely man, despite being hungover he was gentle, warm, approachable and self –deprecating, returning to the breakfast room to collect me for my photograph. I told him that I had been into the Manics for over 20 years and that I felt that made me a very discerning 12 year old girl. His reply “Im not so sure”. Well James in light of Saturday’s performance I have to stand by my original statement. What a gig, what a man! Cant believe I met a legend!!! 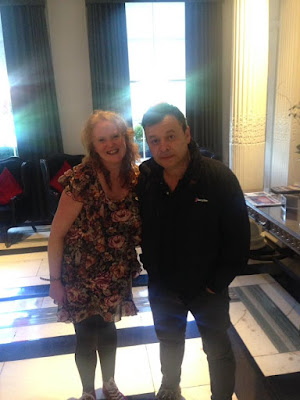