I Am The Walrus

I Am The Walrus by Oasis

Expect a few blogs on Oasis this year to mark the 20th anniversary of the year they played 2 huge shows at Knebworth that topped an incredible 2-year run for them.

Oasis from 1994-1996 were sensational. They had everything; captivating a nation with their songs, looks, attitude, humour and good old fashioned work ethic. In those 2-years I went from watching them support The Boo Radleys at the Tramway all the way to Knebworth via The Cathouse, T in the Park, the Barrowland Ballroom (twice), Sheffield and Ingliston. They played and toured relentlessly, provided exceptional press, released 2 landmark albums and 9 singles (EP's) and soundtracked my life.

I Am The Walrus was their staple set closer throughout the glory years, a Pistol-ised take on The Beatles lysergic classic via the council schemes of Manchester. 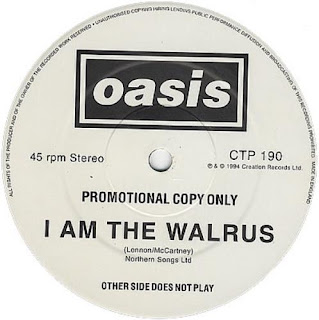 As cover versions go, this was pretty bold. Oasis as a band, Noel and Liam as people, were pretty bold. They went for it, stretching it for up to 10-minutes in length and putting their own distinctive twist on it with Liam sounding incredible on the I'm cryyyyyying refrains and the goo goo g'joob's

The band roared through it, the tight pub band rhythm section of Bonehead, Guigsy and McCaroll allowing Noel to create all kinds of glorious electrifying noise and Liam to live out his Lennon in 94 fantasies.

The original version by The Beatles was perfect for 1967, the Oasis version was perfect for 1994. Oasis were a band wanting to break through all the chart bullshit that was being released back then and I Am The Walrus allowed the band to wear their hearts and influences on their sleeves and providing the perfect opportunity for Noel and Liam to state that it was The Beatles they wanted to aspire to. Oasis never wanted to be an indie band, they wanted to be as big as The Beatles. 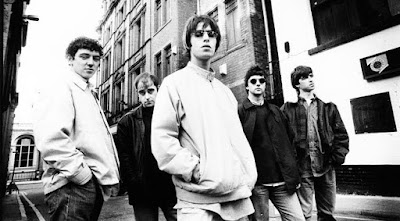 Noel Gallagher's songwriting talents were in a different vein to those of The Beatles; Lennon, McCartney and Harrison had each other to bounce off and were also digesting far out pop music from the likes of the Beach Boys, Hendrix, The Who, The Stones and The Kinks. LSD was the drug of choice, inspiring the trippy lyrics of I Am The Walrus and many other Beatles songs from 1966 onwards. Shaker Maker wasn't quite the same, although it was good fun!

Ecstasy was as far out as Noel went and the drug possibly helped him to write sky scraping choruses and incredible songs about dreaming, love and breaking free. Live Forever, Slide Away, Wonderwall, Don't Look Back In Anger, The Masterplan, Cast No Shadow..... although all have the stamp of The Beatles on them - structure, hook, melody, flow....

Sadly cocaine would blight Noel's songwriting skills for a while - the bloated Be Here Now and the insepid Standing On The Shoulder Of Giants being prime examples.

However, Noel's fascination and passion for all things Beatles helped him to create some beauties and he had a real knack for a middle eight and chorus thanks to hours and days listening to the Fab Four.

Anyway, back to I Am The Walrus - a cracking choice of cover!

Check this incredible version with The Bootleg Beatles recorded from one of their Earls Court shows back in 1995 with Liam on fire.

1. You've Lost That Lovin' Feelin'
2. Going Back To My Roots
3. Nirvana play The Vaselines
4. Slip Inside This House
5. Top 10 covers by Teenage Fanclub
6. Only Love Can Break Your Heart
7. Time For Livin'
8. Sound and Vision
9. All Along The Watchtower
Posted by everythingflows at 11:47