I first blogged about The Second Hand Marching Band back in 2009. Just the fact that they existed was kind of incredible and remarkable, their numbers could reach a couple of dozen at times - not easy to manage! They combined to produce a loving, ramshackle, heartfelt Celtic Soul/folk sound that warmed the heart.

The band are still going strong and have just released, Faults, a 9-track album with Icelandic band Benni Hemm Hemm. The Second Hand Marching Band are fiercely independent and the album is a 100% DIY project from recording, to releasing, to the forthcoming shows in Edinburgh, Glasgow and London on the 17th to 19th March.

I've had the pleasure of listening to Faults for a couple of weeks now. In the house, walking around Glasgow in the Spring sunshine....and the rain. I would normally have written a blog after a couple of listens, but February has been a rather manic month - hence I haven't been writing many blogs. 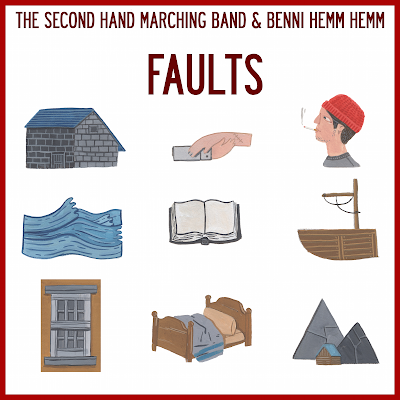 This has worked in favour of Faults as i've had a chance to live with it and listen to it in different moods and in various places.

There are some moments that remind me of the first time I saw The Second Hand Marching Band and  when I was instantly charmed by how seriously they were taking things, but also by how much fun they were having in producing such an incredible sound.

Opener Cling On To Those You Love is fragile brilliance, building from nothing to a soulful mantra that turns (or threatens to turn) a little psychedelic - I can imagine this being stretched out at the live shows.

In A Serious Way captures everything that is special about the band - at times it sounds like there is one person playing an acoustic guitar in a hallway, at others all kinds of instruments come crashing in together to create something uplifting and glorious.

At 1 minute and 10 seconds into Shipcracks there is a spine tingling French Horn, a tinkle of glockenspiel and a picked banjo that just sounds incredibly beautiful. It falls back to an accordion and raw vocals.


I have found new lands all the world around, all around
Sails out, turn this wheel around and make a sound
And leave this gold above the ground, we'll be here again

Then that glorious rush and well of sound returns to take the song to conclusion - it is my favourite song and moment on the album. Stunning. I have always pressed rewind/back after listening to this song in order to enjoy it again. 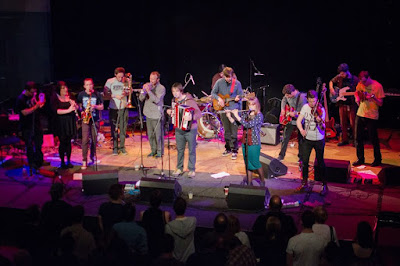 The warmth The Second Hand Marching Band can create is pretty special, Skeletons sounds like a rough and raw improvised jam, with a little french horn (?) working some magic over lovely melodies.

Retaliate is the penultimate track, vocals are intertwined, the acoustic guitar is played with soul and tender care. It sounds like an ancient hymn, celtic cousins coming together in revolution.

The closing instrumental to Retaliate is soulful and uplifting, you heart may well melt.

There are 9 songs to explore - the project was first muted 7-years ago, Glasgow, Cumbernauld, Fife, Reykjavik, Edinburgh, 800-miles, 16 instruments and 8 singers later - Faults.

You can order the album HERE