All Along The Watchtower

Cover of the month #9

All Along The Watchtower - Jimi Hendrix 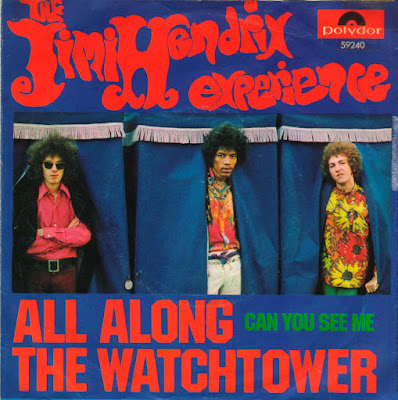 Most, if not all, of my blogs on cover versions to date talk about artists transforming a song - Jimi Hendrix takes on Dylan's All Along The Watchtower and takes it to another planet. Hendrix guitar playing is trailblazing. Mitch Mitchell more than matches Hendrix' guitar with his ferocious drumming. Noel Redding usually underpinned everything, but Hendrix plays bass on this recording. Online info seems to indicate Redding walked out of the recording as it was all done rather spontaneously with Hendrix shouting chord changes. Brian Jones from the Stones plays percussion.

Dylan's version came out in 1967 with Hendrix following swiftly a mere 6-months later. Hendrix peppered his career with covers; Hey Joe being the obvious one, but he also covered The Beatles Sgt Peppers Lonely Hearts Club Band on the day the album was released, shredded Wild Thing and famously interrupted a live TV performance of Hey Joe by saying 'We'd like to stop playing this rubbish and dedicate a song to Cream....' and taking off on an instrumental tribute of Sunshine Of Your Love to the band who were breaking up.

Hendrix is on fire, the breakdown at 2-minutes in and subsequent guitar solo with Hendrix yelping 'hey' goes on for a spellbinding 50-seconds before Hendrix brings it all back in.

Dylan has said of Hendrix' version: 'It overwhelmed me, really. He has such a talent, he could find things inside a song and vigorously develop them. He found things that other people wouldn't think of finding in there. He probably improved upon it by the spaces he was using.'

Hendrix's version remains pretty true to the vocal melody (although he gives it more urgency and just sounds typically Hendrix cool) and acoustic rhythm, but his electric guitar just takes it to another dimension. The needle practically leaps of the record, it sounds vital, there is so much going on, yet like Dylan says in his quote above, Hendrix finds space and he also finds a real groove.

1. You've Lost That Lovin' Feelin'
2. Going Back To My Roots
3. Nirvana play The Vaselines
4. Slip Inside This House
5. Top 10 covers by Teenage Fanclub
6. Only Love Can Break Your Heart
7. Time For Livin'
8. Sound and Vision
Posted by everythingflows at 14:09