Teenage Fanclub have never been shy in terms of wearing their influences on their sleeves. The band have released countless cover versions on b-sides or one-off singles and played them regularly at their shows.

I got into the band as a 15-year old, thirsty for discovering all kinds of music. I couldn't have picked a better band than the Fanclub to fall in love with - and they were from Bellshill, just up the road from Carluke! The Byrds, Dylan, Neil Young, Big Star, Alex Chilton, The Beatles, Madonna,  The Velvet Underground, Yo La Tengo, Sebadoh....all artists covered by TFC.

My favourite? - well it is either Free Again which they released on an extremely limited 7-inch (and I have one) or this - an absolute romp through The Byrds Feel A Whole Lot Better on the White Room.

I decided to compile my favourite ten cover versions performed by Teenage Fanclub. Here they are with links to the Fanclub version and also the original.

Unfortunately there were no links to their cover of Association by International Airport (details here) so that isn't included but it is well worth tracking down if you can.

1. Feel A Whole Lot Better
Norman and Gerry take turns on lead vocals, the Fanclub at their joyous best. The Byrds released this as the b-side to Mr Tambourine Man - also covered by Teenage Fanclub.


2. Free Again
What a tune, a romp through the Alex Chilton song, an artist truly loved by the band. 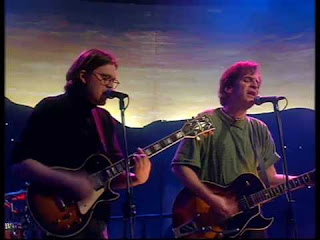 Norman on stage with Alex

3. Don't Cry No Tears
A Neil Young song released on the b-side of the Everything Flows CD single. One of the first songs I ever learned to play on the guitar.

4. I Heard You Looking
Absolutely f**king beautiful. Almost 13-minutes of instrumental genius on this cover of a Yo La Tengo song. Released on the Neil Jung (alternate version) CD single.

5. Burned
Multi-format releases in the 90's was the perfect excuse for Teenage Fanclub to record a cover version or three. This, the original was by Buffalo Springfield, was on one of the Sparky's Dream CD's and Gerry Love just sounds like he is loving singing it. 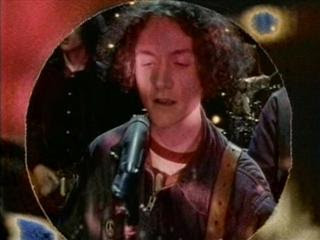 Gerry Love - back in the day

6. He's Be A Diamond
This just flows superbly - perfect for Teenage Fanclub. Originally by The Bevis Frond.

7. Take The Skinheads Bowling
I used to have a couple of Fanclub cassette bootlegs, including a brilliant one from the Reading Festival when the band played this. A cover of a Camper Van Beethoven song. Just brilliant.

8. It's So Hard To Fall In Love
A brilliant Sebadoh song that the Fanclub covered on the bonus disc released with Thirteen. This disc also featured a cheeky romp through Goody Good Gumdrops by The 1910 Fruitgum Company.

9. Mr Tambourine Man
I loved the Reading Festival bootleg I had. Teenage Fanclub came on stage, played an instrumental and then introduced themselves by saying 'Hi we're called Teenage Fanclub and this is a song by The Byrds.' I bought The Byrds greatest hits that week and subsequently discovered Bob Dylan. 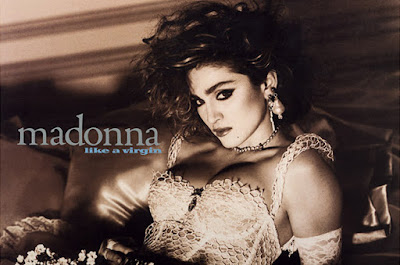