The Beginning Stages of The Polyphonic Spree

The Polyphonic Spree burst on to the music scene in 2002 with their debut album The Beginning Stages Of... 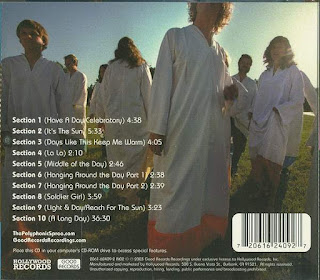 The ambition, scale, enjoyment, wonder, talent and sonic adventure displayed on the album captured the imagination of many, including David Bowie who invited them to play the Meltdown Festival he was curating.

Polyphonic Spree rose from the ashes of leader Tim DeLaughter's previous band - Tripping Daisy. DeLaughter quickly recruited 12 friends and within 2-weeks the band had a 30-minute set of 9- songs - or sections as they like to call them.

They promptly recruited another 12-members and wrote a tenth song! Could they encapsulate the sounds DeLaughter was creating in his head - could he get them on record?

The answer was a euphoric yes. The Beginning Stages... is an absolutely sensational album that I am currently enjoying revisiting ahead of the band returning to Glasgow to play SWG3 on 11th September, playing the Liquid Room in Edinburgh the night before.

The band blew me away back in 2002 and 2003. It was my sister Carla who discovered them and she ended up speaking to De Laughter online. Their show at Glasgow's QMU around that time was like nothing I had ever seen before. DeLaughter led his 24-piece band through the crowd, dressed in robes, singing their hearts out, up to the stage, where they proceeded to produce one of the most soulful, heartfelt, heartwarming, fun and euphoric performances I have ever seen. 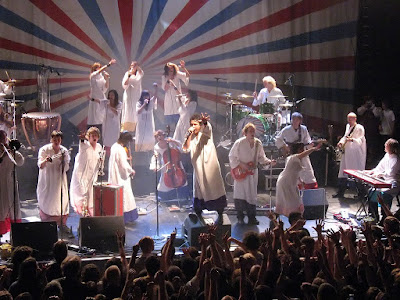 The Beginning Stages... is a life affirming album, born out of tragedy (DeLaughter's friend and bandmate in Tripping Daisy died of a drug overdose in 1999), Have A Day/Celebratory builds to a huge choir singing/echoing DeLaughter's thoughts/hopes.

It's The Sun is like a signature tune for the Polyphonic Spree - bursting with positivity in sound and chorus, yet with sadness, reflection and hope in the verses. This is sensational when they play it live.

And the chorus, so simple, so effective;


Hey now it's the sun, and it makes me shine

Days Like This Keep Me Warm is gorgeous, like a blanket, soothing, melancholy, blissful and soulful. The instrumentation, melodies and variations are sublime.

La La is experimental, noisy and brash in comparison to the other songs on the album and Middle Of The Day is subdued; perhaps both are reflections of DeLaughter's state of mind when creating them.

Out of the noise and uncertainty comes hope and looking forwards in the shape of Hanging Around the Day Part 1 as DeLaughter gives himself a good talking to.


You're hanging around the day
You're filling yourself with blame

God only knows what you're missing 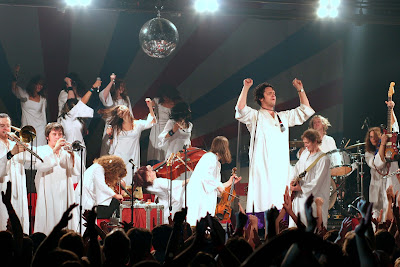 Soldier Girl has a kind of urgency from the start, that only increases as the song goes on - the choir kick in behind DeLaugher and the chorus is repeated again and again. The alternative version on the album is even more urgent and even more euphoric.

Light and Day is the sound of sunshine, hope and love, of a band truly finding a remarkable moment, soaring high and indeed - reaching for the sun. It bubbles into life sounding like the most delicious thing you could ever hear.

DeLaughter is singing his heart out and his band join in after he urges everyone to follow the day and reach for the sun. The song explodes in a glorious frenzy. Listening back is a joy. 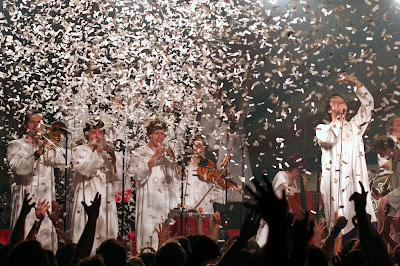 The album closes with A Long Day, a collage of noise, bringing the listener back down to earth.

DeLaughter himself has said that The Beginning Stages... was essentially a demo album that took on a life of its own, the band went back to rerecord several of the songs for singles and most albums contain bonus versions of Soldier Girl, a combined Hanging Around, Light and Day and It's The Sun.

The original demos are gorgeous but DeLaughter and his band take them to a new level on the new versions. I can't wait to see them again at the SWG3. It has been too long - not that it is easy or cheap to take a 24-piece band and choir on the road!