Every now and then I ask a friend to write a guest review; if I can't make a gig, or if they feel particularly passionate about an album or a band.

Sufjan Stevens was playing Edinburgh at the weekend. I could't go, thankfully my friend Kat could.

Here is Kat's amazing review - I think she may well become my Edinburgh correspondent! You can check Kat's photo website HERE

When Murray asked me to write a guest review about Sufjan Stevens gig I obviously jumped at the chance without first thinking about how I was going to put my experience into coherent full length sentences, rather than just a collection of one word hyperbolic gushes. Whilst I will stand by every single one of them it runs the risk of sounding trite and overblown so I will try and be as literate as possible.

Whilst Sufjan Stevens fans are a generally loyal bunch and appreciate, at the very least, the lion's share of his work, Carrie and Lowell has seen a welcome return to the sound many of us first fell in love way back when. To have the opportunity to see him live, following what many have deemed his best album yet, is something I don't think many of us thought we'd get the a chance to witness. I very nearly didn't, relying on social media to source a ticket barely 2 weeks before the gig, but lets not think about that now. With that in mind, the atmosphere at the Edinburgh Playhouse is understandably palpable with the highly anticipated arrival of Sufjan Stevens. But when the house lights go down and the stage lights bathe the audience in a bright orange glow there is a definite heightening of palpability and the man himself walks onstage to an unsurprisingly, raucous welcome of Glasgow crowd proportions.

Starting with 'Redford (For You Yia-Yia & Pappou)' from his third album Michigan (fitting in that he is wearing his Michigan T-Shirt) he moves onto Death with Dignity which begins our odyssey through the entirety of Carrie and Lowell. Devoid of onstage chatter Stevens takes us on a seamless journey through the songs that explores his coming to terms with the recent loss of his mother. The audience are spell bound; barely a noise made; hardly a phone lifted. The continuous swapping of instruments by his multi skilled band, which included sporadic appearances from The National's Bryce Dressner, couldn't even break the spell that Stevens was casting on the audience.

He ploughs through the album staying mostly loyal to the track list, each song accompanied by visuals of sprawling landscapes coelescing into super 8 home movies of which we can only assume are his own family, given the nature of the album's content.

The sparse sound of Carrie and Lowell is embellished by the band's additional instrumentation which allow the songs to swell and fade, filling the venue and enhancing the intensely emotional nature of his most personal and honest album to date. With his band never dropping a beat and his voice never faltering the audience are with him ever step of the way. So much so that there is an audible  intake of breath when he launches into Vesuvius from his last album, the critically acclaimed Age of Adz, before finishing with a sonorous electronic version of the final track from Carrie and Lowell, Blue Bucket of Gold  and exiting the stage to a standing ovation which didn't cease until he re-appeared for his encore. This time we are greeted by a more relaxed Sufjan Stevens who laughs and jokes his way through a 7 song encore which includes John Wayne Gacy Jnr, the first song of his I ever heard  on a compilation album I got free with Mojo nearly 10 years ago.

And soon it really is time for him to go. He finishes with, of course, Chicago, tells us he loves us and eventually walks off stage following another standing ovation of nearly 10 mins, leaving the audience awestruck.

As the audience leaves the building and exhales for the what feels like the first time in nearly 2 hours, it was clear this was one of those gigs that will remain a stalwart in the list of best gigs of all time for almost every single person in that audience. With many of having waited 10 years or more to see Sufjan Stevens live this gig was proof that the best things really do come to those who wait.

Post gig social media is awash with those one word hyperbolic gushes that I mentioned at the start but, to say that they are merely hyperbole is to do Sufjan Stevens a huge disservice because this gig truly was 'phenomenal' 'breathtaking' 'inspirational' 'mesmerizing' etc etc but don't take my word for it, just type in #sufjanstevens and you'll see for yourself. 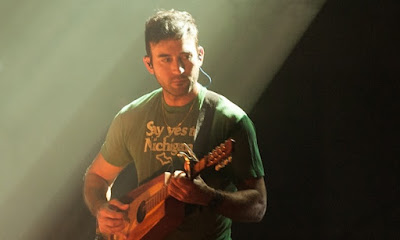