I was slow in getting tickets for Father John Misty at King Tut's earlier this week and despite the early sell-out, the gig wasn't upgraded.

My friend Rose was there and she kindly agreed to write a guest blog for me and here it is - beautifully written...

I have been a fan of Father John Misty (real name Josh Tillman) since I heard his first album, Fear Fun, in early 2013. Planning a summer trip to the US, I had been looking at what gigs we could take in while there and his name popped up. At this stage I hadn’t heard any of his solo music (as well as Fear Fun under the Father John Misty persona he has also released a series of albums as J. Tillman) but I was aware he had previously been the drummer in Fleet Foxes and I had heard good things about the album and his excellent live performances. So I quickly snapped up tickets to see him at Terminal 5 in New York and bought the album. The album would become our soundtrack as we drove round California before heading to NYC and the gig itself turned out to be full of surprises.

Firstly, I wasn’t aware how popular he was; Terminal 5 is a large venue (on a par with the O2 Academy in Glasgow) and, while it wasn’t sold out, it was pretty packed with fans keen to hear Tillman’s amusing take on drug misadventures and LA excess. Secondly, was Tillman himself. He swaggered onto the stage dressed in a white suit, shades on, drink in hand and proceeded to shimmy and shake his way through his set (including getting tangled up in his microphone cable as he enthusiastically swung it round his head)…a far cry from my preconceived image of him as a laid back, folk rock singer-songwriter in the Fleet Foxes mould (I’m thinking now he would scoff at such a thought). Lastly, was how fantastic his songs, and his voice, sounded live; heavier guitars and drums gave them a richer, rockier feel and his voice was note perfect (despite appearing to be heroically drunk…which I expect was part of the FJM persona rather than reality). I couldn’t remember when I’d last had so much fun at a gig and told anyone that would listen that this was my 2013 gig of the year.

So, it was with this backdrop that I headed to a sold out King Tuts Wah Wah Hut on Monday to see Father John Misty, hoping that he would bring a little bit of California sunshine and fun to a miserable, wet evening in Glasgow…

…and wow, he didn’t disappoint.

As the opening bars of his new album title track I Love You Honeybear were played by the band, Tillman swaggered on stage to a rapturous reception by the audience and launched straight into his vocal. In such an intimate venue the first thing that struck me was how imposing Tillman is; he is a tall man, but it was more than just his height. He loomed out over the audience as he sang ‘Honeybear’, holding on to the roof to get a better reach, and with a piercing gaze that I’m sure every person in the audience felt was delivered directly at them. He made best use of the small Tuts stage, gliding around with snake hips that would put Jarvis Cocker and Jim Morrison to shame, dropping to his knees and grabbing the hands of the lucky audience members at the front whilst singing directly to them…and all this before the first song was over.

Next up was Strange Encounter from his new album, which sounded incredible live and brought to life the song’s many layers, followed by Only Son of the Ladies Man from his first album, which gave the crowd a chance to warm its collective vocal chords. By now Tillman was well into his groove and his voice was once again note perfect; any audience members unfamiliar with his work would have clearly heard every word of every song perfectly…which is important, as these are lyrics that demand to be heard. 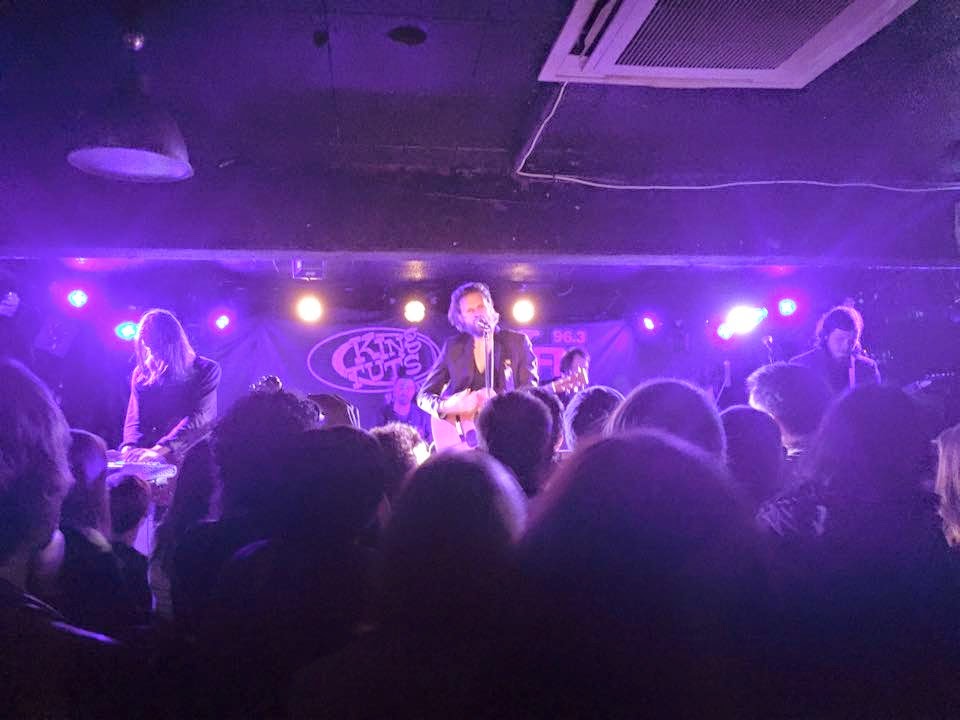 Picture by Michael Prior

The gig consisted of a fairly even split of songs across both albums, with old favourites from Fear Fun (Nancy From Now On, Fun Times in Babylon, Hollywood Forever Cemetery Sings among others) and most of his new album. While the crowd were predictably in fine voice on the older songs (the opening line of I’m Writing A Novel ’I ran down the road/pants down to my knees/screaming please come help me that Canadian shaman gave a little too much to me!’  was sung joyously by one and all, accompanied by some excellent jigging), the songs from the new album (released only two weeks ago) were belted out by the crowd with just as much gusto, which is a credit to Tillman’s incredible song-writing and story-telling. While the songs from I Love You Honeybear are more intimate and personal, it in no way lessens their impact live…in fact I was impressed with how rich and powerful they sounded. It’s clear that Tillman has surrounded himself with incredibly talented musicians in order to do his songs justice.

But it’s Tillman himself that makes the Father John Misty live experience such a success.  A real highlight was the jagged, heavy guitar outro from This is Sally Hatchett (with Tillman atop the base drum, thumping the roof) straight into an intense, emotional, slightly angry, performance of The Ideal Husband…this was goosebump inducing stuff. He exudes confidence and charisma when he performs and seeks to break down any barriers with his audience (imaginary or otherwise). He invited us to ‘get intimate with Josh Tillman’ before launching into his exquisite love song When You’re Smiling and Astride Me (more goosebumps), held hands and serenaded people in the crowd, posed for photographs and writhed around on the floor when the song intensity required it. He was quick witted and sharp in putting down excitable crowd members who dared to shout out random, odd, questions (‘What’s your favourite colour Josh?’ was met with absolute derision), but was appreciative of others input (after commenting on how damp the walls in Tuts were, a shout of ‘they’re moist with our love for you Josh’ was met with a wry smile and ‘I’ll take that’ from Tillman). 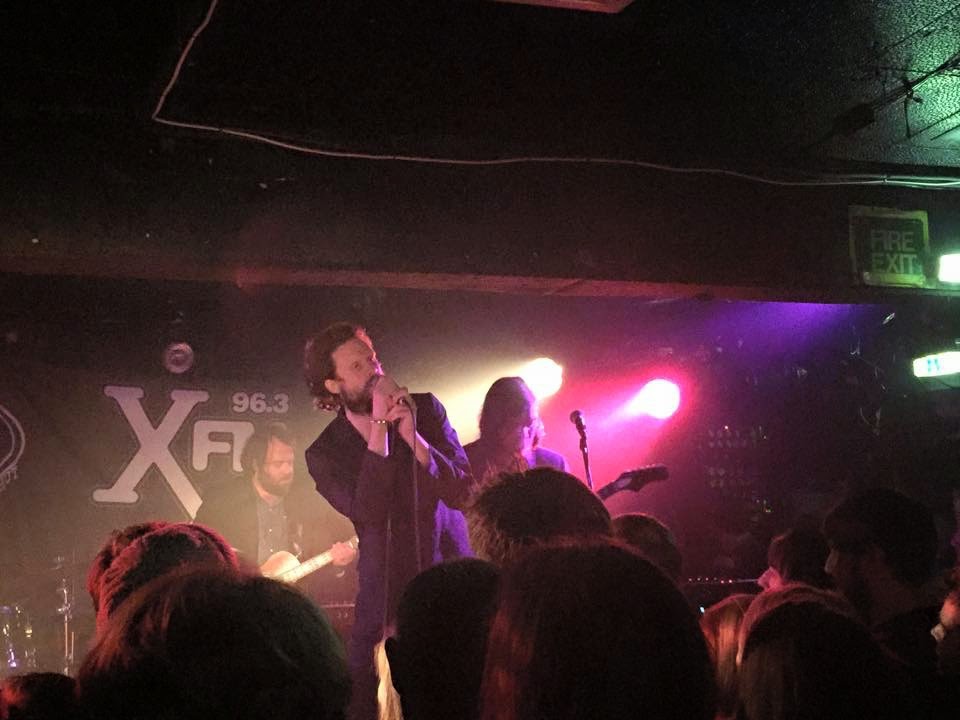 Picture by Michael Prior

He closed the main set with Holy Shit, coming down off the stage and wandering through the Tuts crowd, giving out hugs and high fives, while continuing to sing. I think if his microphone cable length had allowed he would have been right out into the bar area for more of the same. The crowd loved it!! After a brief break, he reappeared for a 2 song encore. First up was Bored In The USA (a work of sheer genius in my view) which he delivered absolutely beautifully, with the audience singing every word and attempting to provide the canned laughter that accompanies the track on the album; credit goes to the few brave souls around me trying to match Tillman’s soaring falsetto. Tillman was spellbinding as he stood in the spotlight, surrounded by smoke, raising hands to the air as we all sang ‘Save me President Jesus’…it was simply breath-taking. The rest of the band then joined him on stage for final song Everyman Needs a Companion…and by this point I think every person in the crowd wanted to remain in Tillman’s company for just a little bit longer.

Sadly, it was not to be, and he headed offstage with a farewell wave to the crowd and handshakes with the lucky punters at the front. As we left the venue the crowd was buzzing (a feeling that lasted for me well into the next day) and praising what had been a truly special performance. I feel very lucky to have been there and hope it’s not too long before Father John Misty comes back to see us. He has gigs in London later in the year, so fingers crossed he’ll pay us another visit. If he does, there are two things of which you can be sure; it will be in a much bigger venue and I’ll be at the front of the queue for tickets.
Posted by everythingflows at 11:21