As a follow up to my blog on the re-opening of BLOC I wanted to delve a little deeper into the philosophy of the bar and their music policy in particular. I caught up with Chris Cusack who is the booker for the venue.


1. In terms of music- what does BLOC stand for?BLOC stands for independent music of all forms. We are as inclusive as possible, hopefully without being inconsistent. We focus on the DIY touring circuit which usually involves live bands and that means a slight bias towards rock and indie, but there is plenty good electro, metal, classical, folk and even hip hop when we can get it.
In terms of general philosophy, we want to provide support for musicians looking to exist as sustainable entities outwith the machinations of mainstream music promotion where money not quality overwhelmingly dictates who and what succeeds to the exclusion of anyone unwilling to compromise their ethics.Bit of a mouthful but that's the idea.
2. How important have your own experiences of playing in bands been to shaping that philosophy? Care to share any good/bad? My own experiences in touring bands (and as the founder of my own DIY record label) have been key to the way BLOC operates. I picked the best aspects of DIY promotion, from my experiences on the continent in particular, and tried to build a system that was realistic for a small business but extremely fair to the acts that perform for us. I wish we could pay double what we do. They deserve so much more. But it is a start and the details (food, drinks, free promo, funding zines etc) all contribute to the sense of investment in the acts and promoters we host.

As for my own experiences, I have had many, both good and bad. Some hilariously so. The most infamous of which - that actually saw me invited to write a chapter for a book published by Cambridge University on the pitfalls of independent music - found me and my bandmates trapped in Prague for 4 days with no transport and our written-off van and equipment in a lock-up surrounding by angry looking dogs and men in greasy vests.

On the flipside, driving across Spanish flatlands, through miles of sunflowers in France or up mountain roads watching a full moon reflect off frozen lakes have all been truly breathtaking. Unloading a van in the French countryside whilst a family of wolves howled in the field next to us was fun. Ach there are so many. This barely scratches the surface. Plus some of them are not entirely PG so probably best kept hush-hush.

3. You have regularly attracted big names for secret/not so secret shows. What is the attraction to them?The attraction to BLOC for big names is the ability to actually engage with their audience in the most intimate way imagineable. Live music these days is so often entirely soulless. it focuses on light shows and live production and is closer to a circus than a gig. One big, gaudy, flickering distraction to sell beers and tshirts set to music designed for sync-deals in advertising.

Amidst that mulch, there are genuine, organic outfits that managed to break through and a lot of those acts came from humble beginnings and in some ways miss the buzz of a crowd screaming in their face from less than a foot away.

In the same vein, we are lucky enough that many of the acts who pass through our doors and go on to become succesful keep us in mind and are only too happy to return our good faith. Frightened Rabbit, PAWS, Twin Atlantic and more are good examples of this. It takes a certain kind of mentality to want to do that though. An understanding of why music is so exciting the more directly you communicate. A realisation of how much truer the art is the fewer middlemen and production staff are inserted into the process. Certainly some bands just don't get that. We have found that out in the past. We asked if they were interested and they were very much of the opinion "We can play big places now. Why would we play a small one?" So yeah. It's a mentality thing.4. Variety is the spice of life and BLOC offers an incredibly eclectic array of nights and music. Did this come about naturally or was it your goal from the start?Yeah as I said at the beginning, we aim to be inclusive. Personally I get turned off by venues that only book in one narrow field of music. They become like gang-huts. The same faces. The same sounds. It all gets stale and introverted.
I am not going to pretend that I enjoy the music of every band we put on, but I have worked hard at developing an ear for the quality of the music. I might not listen to much in the way of, say, folk music, but I absolutely make an effort to tell when someone does a good job of it. It helps that we work with so many promoters who have more developed ears for specifc genres. That was on purpose. These people are experts in their style and having them on board keeps the quality high but the styles diverse.5. Are old favourites like Slow Club, TYCI and Blochestra returning? Any new nights?Yeah those will all still be in the calendar. We have nurtured every one of those from its inception. And yes there will be a number of newer nights like TariboWest and REPEATER. We also have a few fresh ideas lined up for 2015.


6. I believe the sound system has had a severe upgrade. Can you share the spec? What other improvements have been made?The sound system has been upgraded but, without being too technical, it's more in the realms of the out-board and mics. To make it more user friendly, especally for bands that bring their own engineer. We had the PA system upgraded quite recently and in truth it is beyond the necessary rating required for the venue which means we can afford not to push anything or endanger the speakers by running too hot. The new outboard is just another stage in our ongoing determination to keep the facilities evolving. We have also improved the DJ set up and equipment. But that is far from "job done". When the chance arrives, we will look to replace these again with better or newer items. It's an ongoing project.7. BLOC has been the scene of some mental nights; the recent We Are Scientists/Paws show looked incredible. How did that come about?That came about for a lot of the reasons mentioned previously. Specifically the guys in PAWS, who have played for us many times, were touring with We Are Scientists and suggested it to them. They accepted and the rest is history. It was a pretty spectacular event and the guys in both bands were as down to Earth as we had hoped. Again, it takes that mentality to enjoy a tiny show like that when you are used to playing The Barras. A certain lack of pretention. It is refreshing to encounter that in succesful bands and WAS were as friendly and down-to-Earth as you will meet. it goes without saying that the guys from PAWS are not easily sucked in by that minor celebrity bullshit.8. What’s your favourite choice off the new food menu?I have to admit, the boys in the kitchen have really taken it to the next level with some of the new stuff. I pride myself on my spice tolerance (because I am an idiot probably) and thus the Balkan 176 burger was pretty exciting - and surprisingly challenging. It really is pretty bloody intense.
But for flavour, I would say that perhaps the Cuban bagel is hard to beat, though the burgers have been selling like crazy. I don't know man. That is easily the hardest question yet. I love food. Dammit.
Okay. The Cuban Bagel. No. Wait. The Cashew Crunch. 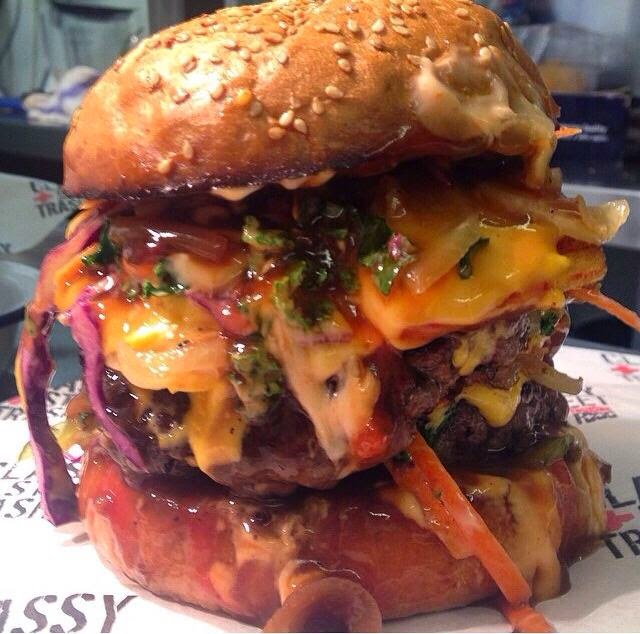 The Durty Burger - try it!

9. Bloc has also branched out into a label. What releases do you have coming up?
We have a couple of albums in the pipeline, including Felix Champion's debut near the end of the year. Those guys are a genuinely dedicated, hard-working group of young guys and seeing the effort they have put in to pursuing their band we were only too happy to be able to help them fund the release.

In the immediate future we have another compilation of Scottish acts. To be precise, it is a series of four compilations as part of a bigger whole and released every fortnight from September 18th. The various bands involved are pretty stellar. United Fruit, Adam Stafford, Felix Champion, So Many Animal Calls, The Cosmic Dead... some of the best underground acts in the country.

Oh and all of those compilations are completely free, just like our shows.10. Any tips or advice for bands or artists looking to play BLOC?
If you want to play BLOC just drop us an email. Details are on the website, bloc.ru, and I reply to every (non-bulk) email I receive. Which can sometimes be a painful undertaking but, as someone who has written thousands of gig and tour emails and had about a 5% response rate, I made that promise to myself from the start and I am sticking to it.
If you want a gig in general - and assuming you have all the usual rehearsal/demo/professionalism stuff in hand - just make sure you don't sell yourself short.

Music has become an easy way for non or ex-musicians to make cash by inserting their "expertise" into what should be a fairly simple process. Don't waste money on needless PR or management too soon. Don't pay to play. Don't agree to bring coachloads of your family down to Liverpool so you can say you played The Cavern. And probably most poignantly, think twice before agreeing to endless streams of gigs where you are asked to sell tickets. You invariably end up milking your relatives for pity-money, selling at cost price and ultimately it is a form of pay to play.

Don't get me wrong, there are times that a specific support slot or venue will be worth it but, if the promoter or venue shows you no evidence of ever developing that relationship, I would suggest you take your business - and audience - elsewhere. There are plenty of alternatives and plenty places only too happy to have you.