Mogwai with The Pastels and Remember Remember at the Usher Hall

The usher Hall in Edinburgh is celebrating its 100th anniversary throughout 2014 with some special shows. In terms of Scottish independent music, you can't get much more special than last nights triple bill of Mogwai, The Pastels and Remember Remember.

With the rugby on at Murrayfield, Dave kindly offered to drive so we could avoid the last train back with a load of drunken rugby fans. This ensured we were through in time for doors opening and in plenty of time for Remember Remember.

The Usher Hall looked exceptional, a fitting setting for the evening. 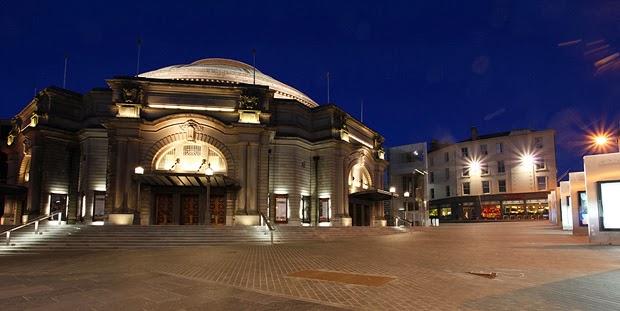 Remember Remember were a 6-piece for the evening, lined up across the stage with an impressive array of instruments and effects. Graeme Ronald introduced the band and thanked Mogwai for having them, before announcing they would play some songs from their forthcoming album due for release later this year, on Mogwai's Rock Action Records.

The opening song was beautiful. Bubbling lysergic synths, delicate melodies played out on xylophone and keys before synths, bass and percussion took took the audience on a musical journey into Graeme Ronald's mind.

Ronald's ear for melody and his ability to create beautiful layers and sonic adventures is pretty staggering on record. Watching him almost conduct his band in a live setting with knowing nods and glances is a pleasure to watch. The smile on his face as he let the closing song fall to him playing keys before letting rip on his guitar was fantastic, you could tell he was enjoying being let loose on the Usher Hall sound system. 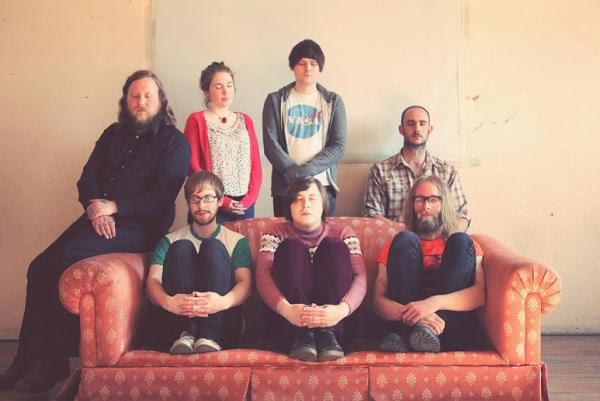 The venue was pretty full by the time Remember Remember had finished their set, so my wish for a quick visit to the bar before The Pastels came on wasn't quite fulfilled as it was mobbed.

The Pastels were in full flow with the title track of their latest album 'Slow Summits' as we made our way to the front. A 6 minute 30 second guitar surf/psych instrumental, it sounded superb via the Usher Hall sound system, the guitars were sharp and piercing.

The Pastels went one better than Remember Remember and were a 7-piece for the night, sounding superb on a range of songs from throughout their career. 'Check My Heart' was a joyful romp, bright and breezy guitar pop, full of hooks and melodies. 'Summer Rain' was melancholic and beautiful.

Song of the night for me was 'Baby Honey'. If Ronald had visibly displayed his enjoyment of the quality of the sound system on offer then Stephen Pastel did the same; turning his amp up, using a bottle for effects and creating a fantastic sound with duelling guitars. It dates back almost 30-years but just sounds so fresh and vital, raw and packed with urgency. 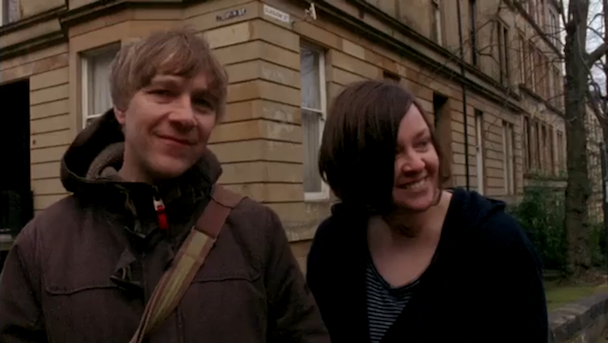 Mogwai came on to a magnificent reception and didn't waste any time at all in creating widescreen soundscapes in a way that only they can. We moved back from the front to take it in, but also to protect our ears a little. Mogwai are fierce!

'Heard About You Last Night' is the opening song from their fantastic 'Rave Tapes' LP and it opened proceedings here. The band just locked in, all on the same wave length.

The dramatic lighting rigs suspended from the ceiling created a spaceship like feel to the show, Mogwai certainly played like they are from another planet. Braithwaite jerked in time with his playing, another clearly enjoying the sound system

The audience seemed in awe and in adulation. Mogwai inspire a real devotion from fans, displayed in the hall and also through the steady queue at the mercy stall

Mogwai are an incredible live act, quite difficult to describe, you really have to experience it for yourself. The way they take a riff/sound and build on it, they are intense, fierce and inventive. 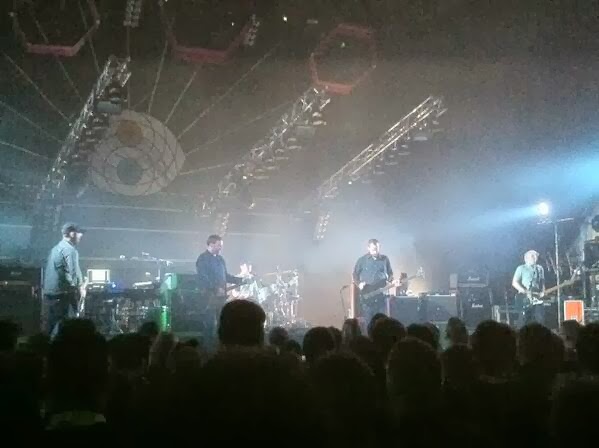 This was a fantastic 3-band bill in a tremendous setting that bands and fans appreciated.
Posted by everythingflows at 13:47