Sadly the girls and I couldn't make it up to the Saturday of Doune The Rabbit Hole. I was gutted to miss Belle & Sebastian and Camera Obscura among many others.

Thankfully my friend Julie agreed to write her first blog! Julie was up with her husband Kyle, two young kids - Phoebe & Keir, plus her in-laws Sandra and Andy. Their company on Friday & Sunday was extremely welcome and it was great to hear Andy & Sandra's many musical stories. 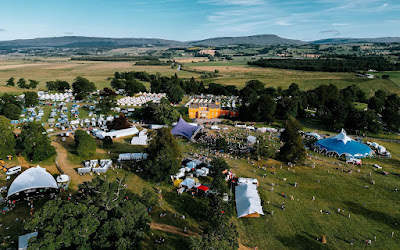 Saturday, Doune the Rabbit Hole 2022 - the day we had been looking forward to since 2019 and it did not disappoint.

We started the day with a trip to the fully stocked family area. Firstly we took in the traditional games and skittles, before trying our hand at the circus skills. Our son swiftly returned to the marble run which so solidly captured his attention the previous day. While at the family area we took in the chance to attend a unicorn dance party - turns out all we needed was some sparkle! 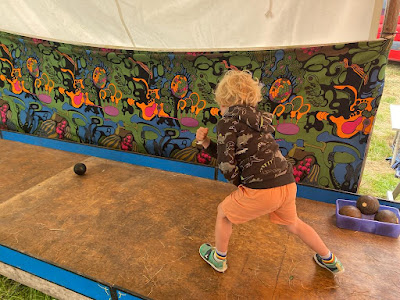 After this it was time to camp out in front of the main stage for the stellar Saturday afternoon line up. We found a spot with plenty of space and a great view where we could enjoy a lazy afternoon with some great performers. Doune is really well set up for families, with everybody being relaxed and ready to have a good time.

BC Camplight came first, setting the tone by opening his set with the lyrics This afternoon I thought about buckfast and space. After the confusion was cleared up about the location (we were in Lake of Monteith, not Stirling) he continued with his deeply personal lyrics, playing his song written following deportation with a video of Theresa May dancing in the background! He received a warm Scottish welcome, especially when sharing it was the best thing that had happened to him all week following being broken up with! Our only complaint was no Shortly After Take Off, the son our 5 year old son had been asking about all day. 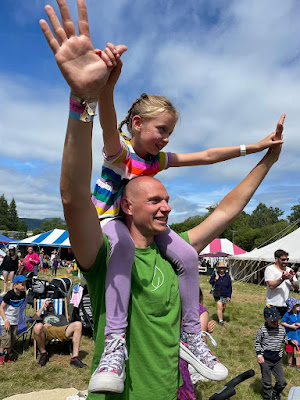 Tide Lines were up next, a band that were new to us but we'd like to hear more of. There was no denying their Highland roots with the crowd dancing along to the Far Side of the World and The Young and the Restless. I can see how they managed to sell out the Barrowland and hope to see them continue to have success.

Next on the line up were Stockport's finest - 10cc. Not a band I was familiar with but one of those bands where you recognise more songs than you expect to - with the lyric I don't like cricket - I love it being sung on repeat in our home for the last few days. They delivered a set covering all their hits with many in the crowd joining in for every line.

The day was finished off by two of Glasgow's finest bands. Second last of the day and a big favourite of mine, Camera Obscura. Back on stage after a hiatus, Tracyann's distinctive voice was a welcomed sound, kicking off with Sweetest Thing and finishing with Razzle Dazzle Rose. And we loved everything in between.

An finally as the sun began to set, Belle & Sebastian arrived on stage to the first and very brief rain shower of the day. There's little that can beat a live B&S show (in my view) but even better watching with your two kids who are equally enjoying the show. They played a mix of new (Unnecessary Drama) and old (Get Me Away From Here I'm Dying), much to the crowds delight and were joined by the bands kids on stage for The Boy With The Arab Strap. Stuart Murdoch was enjoying the Scottish crowd after returning from an American tour, and the crowd were equally happy to be there.

After a short break, they returned for an encore with Another Sunny Day and luckily for us, it had been just that. 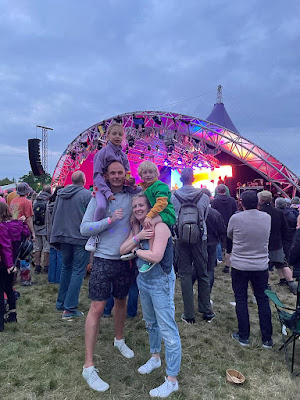