Welcome to the first of 3 blogs on Doune The Rabbit Hole 2022. 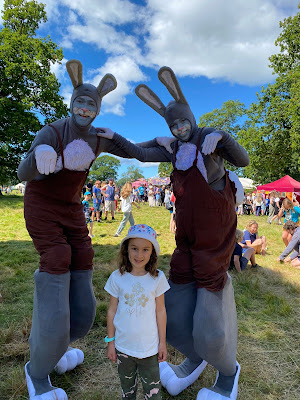 Sadly we couldn't make it up on the Thursday night, but by all accounts the legendary Patti Smith smashed things out of the park, while Tim Burgess defied rail strikes and cancellations to make it up for his DJ slot. Going by his video tweets of him dropping The Chemical Brothers, The Human League, Underworld and The Charlatans own The Only One I Know - he had a good time and he'll be back.

This was my first trip to Doune and I already know it won't be my last. I've followed the festival online since inception and it's grown from very humble beginnings into a really brilliant family festival.

More on that later, as my daughters Zoe and Rosie accompanied me to test that out! Zoe has promised a vlog on the weekend, but that might come later on.

Firstly, the setting is absolutely gorgeous. Doune was under an hours drive from Uddingston, once we got off the motorway we marvelled at the rolling green hills and hundreds of bales of hay neatly rolled up, stretching as far as they eye could see.

The skies were grey and rain was falling, however as we got closer to the festival site, the clouds parted and before long blue skies were the order of the day.

Doune's festival site is absolutely stunning. Each stage area is well thought out, Nothing is too far away, no stage is overwhelmingly huge, yet there is plenty of space. There are beautiful trees to chill under and get some shade - needed yesterday, cool food stalls, lots of quirky festival stalls and an AMAZING family area! 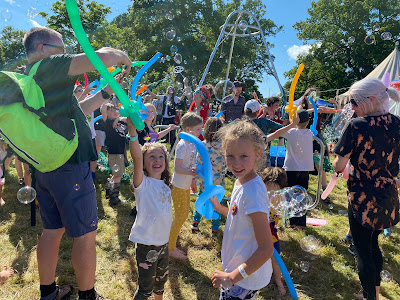 My youngest (7) could happily have pottered around there most of (if not all of) the day; storytelling, the legendary Singing Kettle, arts and crafts, a sandpit, giant bubble workshops and parties, drumming workshops ... and loads more. As my friend Julie (who is up with her 7 year old daughter and 4 year old son for the full weekend) said - 'if they had a coffee shop and bar here then we wouldn't need to leave!'

It was great to see kids getting up to good old fashioned fun, with a marble run proving to be a big winner! There was also a 'junk yard' for kids to play with all kinds of things, or see what they could make. Plus supervised tight rope walking and rope climbing.

Could they introduce a kids club!

We spent our first couple of hours hanging in the kids club and taking a walk round the site to get our bearings. Then we headed to meet my sister Carla who was playing the Baino's Tolbooth Stage with her band Poster Paints at 1.30pm.

Poster Paints played a shimmering, summery set. Singles Number 1, Never Saw It Coming and Falling Hard were indie guitar pop tastic. While slow groove burners like Circus Moving On, Hard To Sweeten (a personal favourite) and Blood Orange show a very different side to them that will be displayed on their forthcoming debut album. The latter, with the hook, bursting blood orange, seemed made for the sunshine. Closing with My Song, which soared into New Order territory thanks to a sublime combination of bass, synth and infectious guitar, Poster Paints won new fans.

I got evidence of this through my daughter Zoe who went a walk round the festival with Carla afterwards. 'Lots of people wanted to speak with Aunt Carla!' 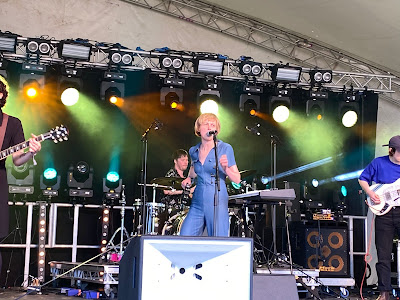 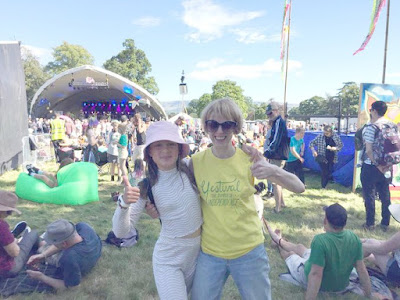 Zoe with Aunt Carla
We kind of flitted between the Baino's stage and the family area for the rest of the afternoon. The next band Peaness (much amusement to the kids!) were really cool and also just a perfect summer soundtrack.
The Rezillos were brilliant fun, they really got the crowd going. Although they went on earlier than billed, so there were a few disgruntled fans who sadly missed them. I think they went on earlier as The Deep Blue (from Ireland) were late. So credit to the Rezillos for that and due to the grassroots nature of Doune, it's difficult to spread the word of any changes across the site. Their cover of Land Of A Thousand Dances got people of all ages singing and dancing, then their punk hit Top Of The Pops sparkled with energy.
The Deep Blue showcased effortless 3-part harmonies and had a real Fleetwood Mac vibe going on. Very nice indeed. We also caught a bit of Liverpool's She Drew The Gun on the main stage who drew a cracking crowd. They are a very hard working band and word of mouth seems to be growing. 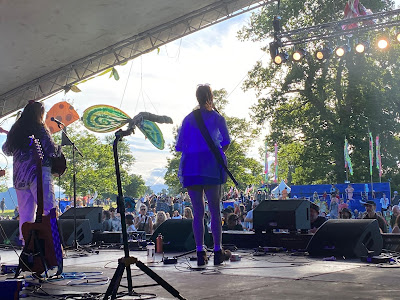 The Deep Blue
After some delicious German hot dogs we went over to Esperanza play a superb set on the Whistleblower stage. Their infectious and highly energetic ska set got loads of people dancing. I really enjoyed their set and the chance to cut loose. 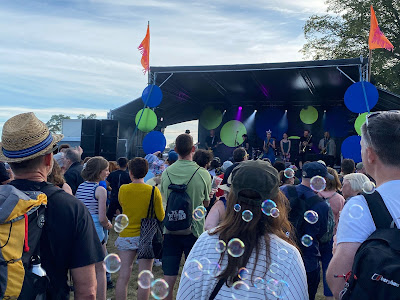 The need to dance had arrived, so we decided to check out Optimo in the Comhla tent. There were loads of parents in with their kids and the Optimo guys were acknowledging that with nods and winks. The way they were layering and building their set was superb. I could happily have stayed to see what they played towards the end of their set, but the kids wanted to see what a festival headliner looked like. They were starting to flag a little, so we headed to the main stage for Amy MacDonald. 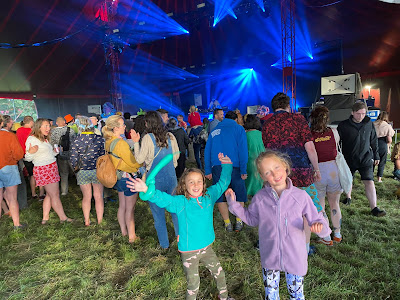 Amy seemed thrilled to be playing, packing the main stage area and swiftly getting into her stride with her excellent band. We only stayed for a few songs as after a long day in the sun of playing and watching bands, the kids were ready for rest.
Unfortunately Yard Act were on just a little too late for the kids. I'll need to see them when they play Saint Lukes later in the year! 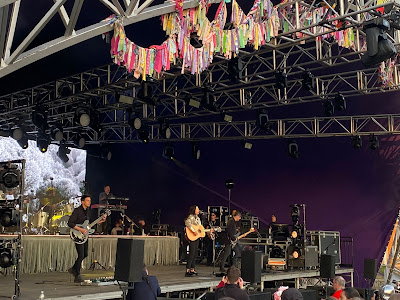