Edwyn Collins at the QMU Glasgow 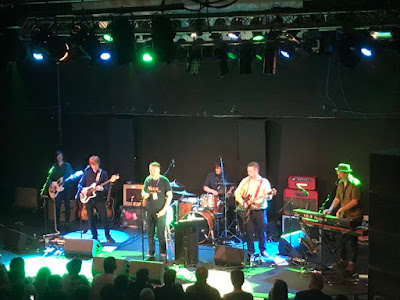 I can't remember the last time I attended a gig at the QMU in the leafy West End of Glasgow. But last night I was reminded what an excellent venue it is as Edwyn Collins returned home to deliver a spell binding and life affirming show to fans who lapped up every minute.

Collins was backed by an oustanding 5-piece band; two guitars (Little Barrie and Andy H), bass (Carwyn Ellis), drums (Jake Hutton) and keys/saxaphone (Sean Read). Little Barrie on lead guitar was an absolute joy to watch and Collins urged him on several times through the course of the show, he seemed to be enjoying the guitarist just as much as the audience.

There was a sense of occasion to the show, the atmosphere was warm, the audience appreciative and respectful. Edwyn seemed to recognise this and his humour was on display throughout - poking fun at himself and at his rhythm guitarist who needed help from a guitar tech on several occasions.

Oh what a catalogue this maestro has at his disposal. And Collins delved deep into his songbook to play songs from start to present, new songs, classics and a few surprises as well.

Edwyn's song In Your Eyes with The Drums from his Losing Sleep album is a particular favourite of mine. I love the guitars, the flow of the song and the euphoric chorus. So it was a real delight when Edwyn's son William came out to sing the part of Jonathan Pierce. It was a lovely moment to witness, Edwyn introducing his son and asking him how he was to a shrug of the shoulders 'alright' and their voices combining towards the end was thrilling.

What Presence? was an early highlight, A Girl Like You is timeless guitar pop with a nod to northern soul and Little Barrie shone on guitar, Don't Shilly Shally fizzed with energy, It's All About You from latest album Badbea was northern punk soul, Home Again was tender and beautiful yet delivered with real vocal power, while the double blast of Blue Boy and Falling and Laughing was a delight with Collins standing to deliver them and also to take the ovation from the crowd.