The Last Of The Gracious Losers

In this blog I've tried to combine 3 fantastic things I have experienced over the last week courtesy of Jonathan Liley and his band, The Gracious Losers.

- Firstly I had the pleasure of getting my hands on his bands debut LP. It comes in a stunning gatefold sleeve with artwork courtesy of Sean Phillips, the Elsner Award winning comic book artist. More about the music later.

- Secondly, I caught Jonathan playing an intimate acoustic show backed by his friend and band mate Heather on violin as part of a pop up record shop in The Doublet. I was struck by watching Jonathan in such an intimate setting at just how good he is on guitar. Sometimes with only 3 or 4 simple chords (that even I can play) - but he makes them sound a hell of a lot better than I can! He doesn't just play his guitar - he feels it.

The afternoon of music and beers in (and outside) The Doublet was fantastic and I was once again struck by the sense of community created by the Last Night From Glasgow label who organised the day. I don't know why it still surprises me as it has been evident since the label launch night, but it strengthens and develops with every release and event.

- And then on Friday night Jonathan's incredible band launched the album with a headline show at Glasgow's newest live music venue - The Great Eastern. I think The Gracious Losers had 13 people on stage at times and what a sound they created. The Great Eastern on Carrington Street, just off Great Western Road, is a care centre for the elderly during the day. The team from Synergy Concerts have signed a lease for a string of shows at the venue and it was easy to see why. The main room has high beamed ceilings and natural light floods in from windows on either side. A pop up bar was ceased upon by the thirsty crowd and it felt like a real event. 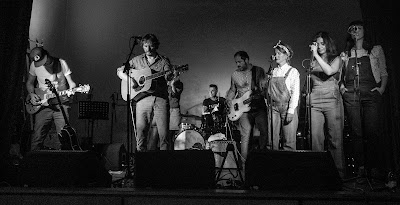 The Last Of The Gracious Losers LP has a warm  natural glow from start to finish. The 9-piece (sometimes more) group formed by Jonathan Liley are all top notch musicians (including Johnny Smilie and Monica Queen from Thrum) and capable of jamming, improvising and creating wonderful moments.

Although captured well on vinyl, to see this wonderful group play live on Friday night was a joy. They took flight and the finale of Hey, I'm Riding Low and I Can Never Read the Signs was mind blowingly good. The former is a little over 7-minutes long and the band lock in like Crazy Horse with Johnny Smilie coaxing incredible sounds from his guitar. The latter has a false ending before Liley leads his band to even higher levels, helped by 3 backing singers and a brass section. 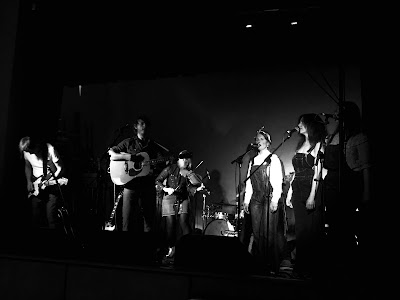 Liley is a warm host, bubbling with enthusiasm and a smile is never far from his face. It was easy to see and feel just how much the night meant to him.

The band opened by huddling close around Liley centre stage to sing acapella and harmonise on a new song Till I Go Home which immediately captivated the audience. 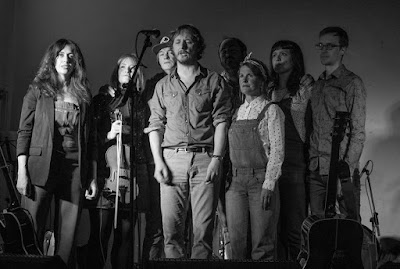 The second song in was sensational and I later found that it was a cover of the Daniel Johnston song To Go Home, arranged in the style of the M Ward cover of the song. I was blown away by it. Power, passion and soul. You can check the M Ward version HERE, I hope that The Gracious Losers go on to record their own.

Back to the record Where The River Meets The Sea is counted in gently and for a brief moment it sounds like the guitar, piano and beats are finding each other .... and then they do ... and then we're off into the world of The Gracious Losers. Heartfelt vocals, instruments colliding then breaking, then coming back together and bringing in a friend for good measure. Horns, backing vocals and strings are all there but the song still has so much space to breath.

The harmonies on Moonlight Parade are spine tinglingly good and the band are given time to play, the slide guitar touches the soul. Liley's romantic soul is all over the album I wanna dance with you babe, in the moonlight parade. 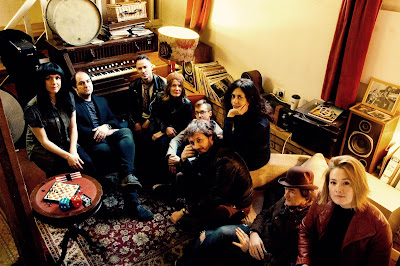 Last weekend I got to see Jonathan play an intimate acoustic set, backed only by Heather Philips on violin. Give Your Pain A Name was (for me) a highlight of their set. It's so fragile, so tender, sometimes it feels like it is hardly there. It is a special talent to be able to write and play like this, to get so much feeling down on record. On the album it's Jonathan, his acoustic and mouth organ. Get your headphones on and close your eyes for this beauty.


Give your pain a name and you'll feel much better
It won't hurt so bad when it lets you down, down, down
Next time around

Hey I'm Riding Low is 7-minutes of joy on record. This is widescreen, this is classical, this is absolutely beautiful. We have 90-seconds where guitar and strings play and soar before the beat comes in and Jonathan sings with Amanda. Then the lead electric guitar just takes off like Neil Young and Crazy Horse, the rhythm is simple and kind of funky, and the guitar swoops and soars - wow! Honestly, if you do one thing from reading this blog then check this song and I bet you buy the record. 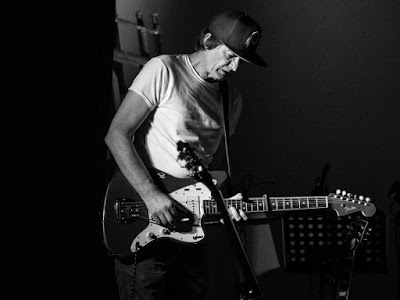 I Can Never Read The Signs is another epic, the song tails off at 5 minutes 30 before easing itself back in and coming in at a different level - the energy leaps from the record. What a performance!

This was the finale of the bands launch show and oh wow! It was special - Jonathan along with Gary Johnston, Rory McGregor, Johnny Smillier, Erik Igelstrom, Heather Philips, Amanda McKeown, Monica Queen and Celia Garcia (and others!) just soared where few can dream of flying.

The band were one as Amanda, Monica and Celia let rip with their vocals over horns my spine tingled and goosebumps miraculously appeared on my arms. Liley turned to play and groove with his super tight rhythm section and at the end brought everyone to the stage to take in the applause and he fell to his knees, probably wondering it it was all a dream.

I bet he had dreamt of this moment - well it came real. 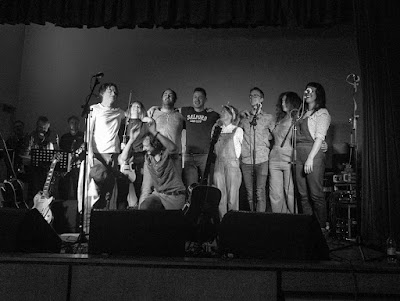