Cover version of the month #32 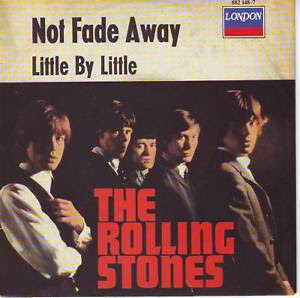 The Rolling Stones launched in June 1963, releasing a cover version of Chuck Berry's Come On, they would follow that with a Lennon and McCartney number I Wanna Be Your Man that the duo bashed out in 20-minutes to help The Stones and their manager Andrew Loog Oldham.  In search of original material there are stories that Loog Odham eventually resorted to locking Jagger and Richards in a room until they came up with something!

Their third release, in February 1964, was a scorching cover of Buddy Holly's Not Fade Away. They transformed the song, stamping their identify of rock n roll blues all over it. Brian Jones playing the mouth organ sounded a million times more exciting than when Lennon played his less than 2 years previously on The Beatles Love Me Do.

The original by Buddy Holly and The Crickets was written in 1957 and released as a b-side to the single Oh Boy and on the album The Chirping Crickets in 1958. The Stones keep the structure of the song but they turn it into raw and electric rock n roll. The difference is quite staggering, the drummer for the Crickets pounds the beat on a cardboard box! Through each recording you see the move from skiffle to rock n roll. No-one would ever look back.

The urgency in Jagger's voice is striking from the off. When Jagger sings it you believe him, you believe he's a lover and you kind of fall for him; hook, line and sinker.

I wanna tell you how it's gonna be, you're gonna give your love to me,
I wanna love you night and day, well love is love and not fade away

The handclaps, beats, Brian Jones on harmonica, the acoustic rhythm and the explosion of Richards on electric guitar sound incredibly exciting - even in 2018. The Stones transform the original and in under 2-minutes display the energy that captivated audiences across the globe.

Check the magnificent interview and performance from 1964 below and then the studio recording, followed by the original by Buddy Holly and The Crickets.