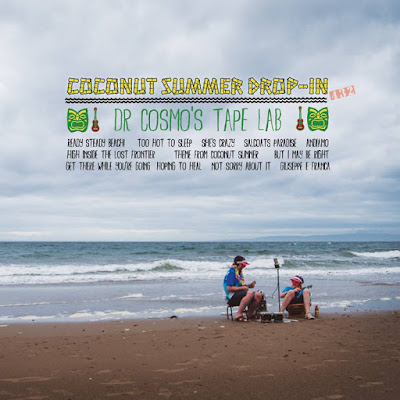 Dr Cosmo's Tape Lab agree and decided to do something about it; Coconut Summer Drop-In 432 was recorded in 3-weeks in July 2015 at the bands home studio in a rain drenched Glasgow. It was released on Friday (August 14th), has it been a co-incidence that the sun has been shining ever since?

The bands sense of melody and  humour is all over the album alongside their thirst for sonic adventures.

Ready Steady Beach is tongue in cheek humour with a couple of Beatles samples thrown in for good measure; just to make sure you understand their influences.

Saltcoats Paradise is a dreamy ditty; beautiful and inventive, arriving 4-songs in. The fact that Dr Cosmo's record on to a 4-track is something I have to pinch myself to remember. 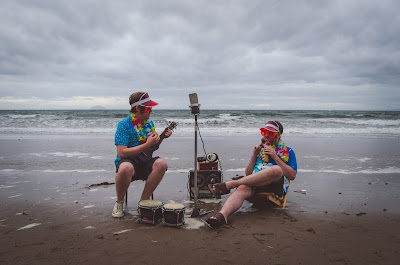 Stuart Kidd and Joe Kane have talent pouring out of them, this is their 3rd album, a mere 14-months after the release of their debut and upon emailing Joe he confirmed that their 4th is recorded and will be released early in 2016, but they didn't want to wait until then to get something new out!

The prolific duo have plenty to offer listeners; But I May Be Right is short and sweet at only 1-minute and 6 seconds in length, but Kidd and Kane just pull you in and wish they had kept things going rather than fade out.

Hoping To Heal is just over 30-seconds of dreamy gorgeousness, sounding like someone recorded it on a phone, but just sounding beautiful. I hope they revisit it.

Dr Cosmo's have the talent and ability to brighten any day, with Coconut Summer Drop-In 432 there are moments of madcap craziness (check the closer Giuseppe e Franca), loads of humour, melodies to die for and a few moments of genius. I look forward to album number 4.

You can buy all 3 Dr Cosmo's albums to date by visiting their BANDCAMP page.

These guys are different, their talent stands out a mile, they just want to record and release. Long may that continue. 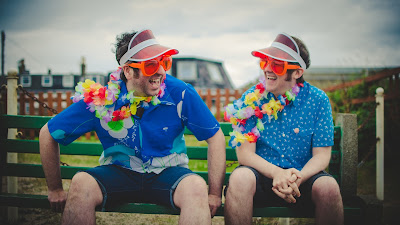