The East End Social and Edwyn Collins at Glasgow Green

I last blogged about Edwyn Collins back in June following an outstanding performance at Oran Mor. In the blog I said that I would love to see him do a full stripped back acoustic set at some point.

Well the Gods must have been smiling upon me as on Saturday Edwyn travelled North to play an acoustic show for the East End Social at Glasgow Green as part of the Commonwealth Games. Not only that - it was completely free!

The team behind the East End Social must be heartily commended for the exceptional programme of music that they have curated before, during and after the Games. There have been pop up shows in Dennistoun, a Neu! Reekie extravaganza at Platform in Easterhouse, shows in teeny tiny Bowlers bar in Bridgeton, we had a full on festival at Glasgow Green over the weekend and things are due to be brought to a close in epic style at the end of August with a weekend in Richmond Park featuring Mogwai headlining one night and Optimo the second!

The blank canvas that the team were given has been coloured in beautifully; legends, innovators, cult bands, young bands breaking through and everything in between have been given a chance to demonstrate the musical talent and variety that is on offer in the city of Glasgow.

To be quite honest, it is music that has been the highlight of the Commonwealth Games for me. The East End Social is one thing, there has also been the Belle and Sebastian show at Kelvingrove Bandstand (also loads of free shows there as well as stuff by the likes of The Waterboys) and all kinds of things going on down by the waterfront at the BBC featuring the likes of Simple Minds and the gorgeous Rachel Sermanni.

I could have done with a few weeks off to try and make the most of it!

Anyway, back to Edwyn at Glasgow Green.

Edwyn was thankfully playing inside a beautiful big tent called The Playhouse. I would love to see it installed permanently on the Green, it was a brilliant venue.

What made this show extra special was the fact that we took our 3-year old daughter Zoe. It was her first full gig -quite something for a 3-year old!

There were a number of young families down the front, so we got down and grabbed a seat on the floor, the friendly crowd stood behind the young kids, allowing them the chance to sit and watch a master at close quarters. 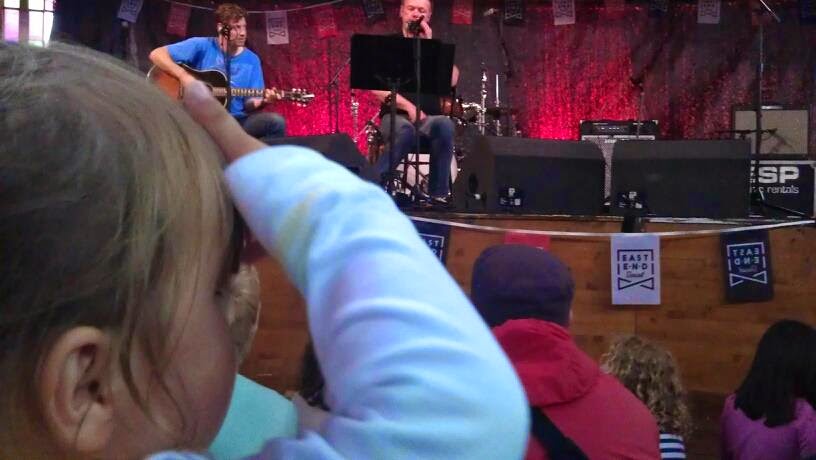 Edwyn was accompanied by the guitar virtuoso that is James Walbourne and there was a clear bond between the two, despite the fact Edwyn forgot his surname; causing laughter on stage and in the crowd and becoming a running joke.

The duo opened with Losing Sleep and Make Me Feel Again, the tent was packed - due to the fact that a genuine Scottish musical legend was playing - and the rain. People were listening from outside according to friends I spoke to later.

Edwyn was in great form, getting more and more into it the longer the show went on.

Home Again was exquisite; full of melody and emotion. It was my first time hearing it live since reading Grace Maxwell's book Falling and Laughing - The Restoration of Edwyn Collins. I had a little tear in my eye.

James was truly brilliant on the guitar, able to play anything and everything - and that is exactly what they did; delighting the crowd with Orange Juice classics Blue Boy, Falling and Laughing and Rip it Up.

Rip It Up was great fun with Edwyn egging James on and taking the mick in just the right way. The crowd loved it.

Don't Shilly Shally was brilliant and I was a proud Dad as Zoe clapped along and nodded her head.

A Girl Like You closed things in style with Edwyn humming along with the melody and congratulating James on his guitar playing.

This was a great little show. I'd love to see Edwyn play his songs in this stripped down acoustic way again in the future.