Jeez, I had a blog in mind, all practically written about a euphoric comeback show by Embrace, taking the roof off King Tut's and playing a blinder.

That blog has been well and truly ripped up. Sadly, I am a fan. I usually only write about things that i enjoy and I'm passionate about. Has to change tonight.

Embrace came on stage at 10pm shap and subjected us to some new and distinctly average songs. They've not played live (other than a few secret gigs) for 7-years, so a bit of rustiness can be excused. Tonight was a charity show at £20 a ticket - plus booking fees etc. So I expected a great show. It was average, flat and disappointing.

Don't get me wrong, there was the odd moment of brilliance. 'Ashes' and 'All You Good Good People' were excellent (other than flat vocals), but they were played in between new songs that were…..well poor.

New single 'Refugee' was an exception. I've blogged about it already and it really did whet my appetite for a triumphant return. There was only one other new song that remotely generated any interest.

Embrace did generate some hands in the air, sing from the bottom of your lungs moments, the Tut's crowd sang lustily to 'Gravity', 'Retread' and 'Come Back To What You Know'. However this wasn't the show it could have been and should have been. Even the beautiful 'Fireworks' fell flat, a drunk heckler shouting for Katie Perry caused much amusement though. 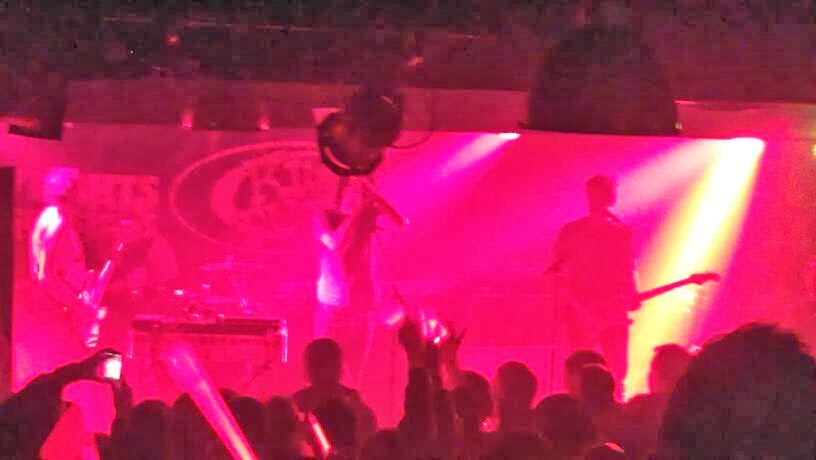 What's next? Embrace have just announced a show at the Academy in May. That is somewhat ambitious based on tonight and the new material aired. When Danny announced 'this is our last song and the last song on the new album' I braced myself for something soulful and euphoric. I didn't get it.

Embrace have written some belters - by in large they are from their debut album alongside material like 'Ashes', 'Some day' and the Chris Martin written 'Gravity'.

They are at a crossroads. Do they play the retro/nostalgia circuit and play on the strength of the beautiful ballads they have written, or try and keep pushing on with new material.

My brother, friends and i left disappointed. There were no fireworks tonight. It could have been so different.

I hope i'm proved wrong and Embrace return and blow the roof off the Academy in May. I can't see it though and I won't be buying a ticket on this evidence.

I just hope that it was rusty and they can shake it off, also improve the setlist. To start with two new mediocre songs was a bad decision, for all Danny's bravado, the audience didn't buy it. The classic old stuff was sadly wedged in between some new songs that just didn't do it - no point in beating around the bush. My friends were not the only ones that left before the end and it wasn't cause they were missing the last subway.

I'm not enjoying writing this but at £20 a pop and the chance to see a band i am fond of in an intimate venue that I first saw them in back in 1997 I expected more. Disappointing.

I think back to the 21 year old me that saw Embrace play Tut's back in the 90's and marvel when they played 'All You Good Good People'. I remember turning to my friend and saying 'that's as good as The Beatles' and i believed it. They have written some cracking tunes but tonight was flat and uninspiring.

Hi, I am very worried by your review. Saw a couple of clips on u tube and tend to agree.....new stuff sounded poor and the vocals awful...what has happened to dannys voice....it used to be so great....BUT i just heard the other 3 tracks on the ep previewed on juno and they sound good.....confused...whats your view??

I went to see Embrace at Fat Sams Dundee last night & couldn't agree more. I was totally hacked off & left after 4 songs. If I was nearer to the stage I would have passed him a note(excuse the pun). So disappointed after waiting 8 years to see them.

You can do a lot in the studio these days.

I am very fond of Embrace and felt a bit guilty about my blog.

Nice pun on the note!

trouble is i have already booked my tickets for london..........they have 3 months to improve........i am a huge fan but the vocals are painful

I think they will be a lot more polished come the big tour.

I hope so....just saw refugees on you tube from Dundee....Richard singing......still very out of tune...is it nerves, technique?? In 2005 they sang really well live...what happened??

I felt bad about my comment too, but was so disappointed at the performance I felt it deserved it. I have played locally for over 20 years, and couldn't last more than one song if the singer was that bad.