Dave and I went to see the incredible Sigur Ros in Edinburgh on Monday.

When Icelandic Post Rock trio, Sigur Ros, took to the stage in Edinburgh on Monday night, the weather outside was more like their home city of Rekyavik, with temperatures plummeting, but the atmosphere inside the magnificent Usher Hall was hot with anticipation.

When the lights went down, a huge curtain hung across the front of the stage. As the opening notes of Yfirboro rang out, silhouettes of the band were projected onto the curtain, with the visuals projected from behind as the falsetto voice of Jonsi filled the hall. The curtain remained for Vaka, as the lights made the silhouetted figures grow and move around the stage. The curtain fell as Brennisteinn, the opening track from this years Kveikur album, exploded in a wave of strobe lights, revealing no fewer than 11 musicians on stage, Kjartan Sveinsson who left the band earlier this year, the notable absencee. 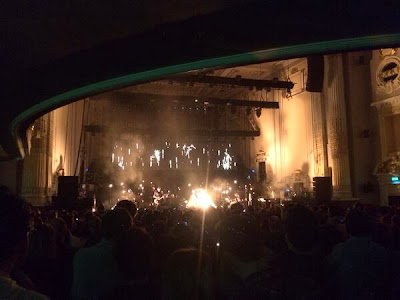 The spine tingling Glosoli from 2005’s Takk album delighted the crowd, the sound produced was amazing, Jonsi’s vocals complimented by a brass and string section. The new material from Kveikur definitely takes the band in a different direction from previous work, with a darker, more aggressive edge to it, and the mix of it along with more familair songs, was proving popular. The stage was set up with many single bulbs on stands that pulsed in time with the music, making for a spectacualr scene as the large screen behind the stage showed visuals. The power of the music is incredible, but you could see just how much work had been put into the lighting and visuals to compliment it.

As the set moved on, the advert friendly, nature documentary accompanying Hoppipolla proved popular, as did Festival that brought the set to a close.

It wasn’t long before they were back for the encore, 1999’s Svefn-g-englar is one of the most recognisable tunes, but still stunning to hear live. The show closed with what was the highlight for me, Popplagio starts gently, and builds to a great crescendo of noise, it’s hard to put into words the hypnotic properties as Jonsi stood centre stage, hunched over his guitar, in a cloud of smoke, pierced by bursts of stroboscopic lights, as chaotice white noise filled the screen, while flawless haunting vocals filled the hall. After nearly 20 minutes, the song drew to a close, with lights flashing and ears ringing as the crowd headed back out into the cold night.

Get daily ideas and instructions for making THOUSANDS OF DOLLARS per day ONLINE totally FREE.
CLICK HERE TO DISCOVER