The live music scene in Glasgow, at least to me, hasn't show any sign of being effected by the economic crisis that the country has been suffering for the last 5-years. Indeed, with the addition of the Hydro it seems to be growing from strength to strength.

We like to be entertained, even if times are tough, that is just another reason to go out and forget about reality, to get lost in music.

It does come at a financial cost though. I don't get out to quite as many gigs as I used to, although I still do pretty well!

I've become friends with a lovely couple called Gordon and Heidi; couple of music nuts who I bump into regularly at shows and who are big fans of the Vigo Thieves. I thought I would interview them to display just how dedicated people can be.

I love their answers, they really highlight the passion of Scottish gig goers, not to mention the variety of musical taste and their dedication to going to live shows. It is people like Gordon and Heidi that generate such a good name for a Scottish audience throughout the world.

1. Can you introduce yourselves and tell us about some of your favourite bands and artists?

I`m Gordon , 47 and I work as a Fork Lift Driver with William Grant and Sons . I have two kids from a previous marriage aged 24 and 22

I`m Heidi , 46 going on 25 and I`m originally from Weert in Holland although I`ve stayed here in Scotland for 10 years now . I work in Tunnocks right now


I like to think that my musical taste is pretty varied but if I pick the bands that I keep going back to listen to then it would be The Jam , Ocean Colour Scene, Bob Marley ( both in his ska and reggae days ) Biffy Clyro and Mr Johnny Cash . There are a few bands about today that might end up on the list eventually . Augustines , Kodaline , Kasabian and The Avett Brothers spring to mind

In my younger days I was into heavy rock , Black Sabbath , Iron Maiden and Judas Priest and I still listen to them . I`ve also always loved Journey . As I`ve mellowed with age I`ve found Biffy Clyro and the Arctic Monkeys , although Elvis will always have a special place in my heart as I grew up listening to him with my dad . Apart from “ metal “ Gordon and I have very similar tastes in music 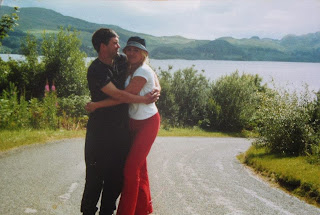 2. Who, when and where did you see live for the first time?

Journey were the first band I ever saw live in Anaheim , California in July 1982 and I was pretty much hooked on live music right there and then . I worked backstage at various venues in Nevada for a while and it was a job that I loved .

The first band I saw live was The Jam at the Apollo in Glasgow in the early 80`s , I also used to go and see a friends band , The Druids, in Bellshill around that time as well . It made me aware that it wasn`t just big bands out there and that plenty of good music was available by watching unsigned local bands

3. Do you have any idea of how many gigs and festivals you have been to this year?

I had to go and trail through our box of ticket stubs , we keep them all along with the setlists that Heidi manages to grab , and we make it 24 gigs and 2 festivals .

We always try for 2 festivals a year , Wickerman and something else .

4. What have been your top 5 musical highlights so far this year?

These are all in no particular order

Chic at Wickerman . If you were there then you will know why and if you weren`t or left early to go see Stiff Little Fingers then you really missed something special

Aye apparently this is the case and Heidi enjoys reminding me just how good they were after we left , my cousin and I watched 30 minutes and then scarpered up to the Scooter tent for SLF . I have to say that they were a bit of a let down

Watching Vigo Thieves playing a sold out gig at the Arches . We have followed this Wishaw based band for a long time now and we have got to know the guys really well , they are a cracking bunch of lads and when we first saw them at Maggie Mays it was in front of 6 people .

From that to the Arches was amazing , they deserve a bigger audience for certain . This year should be their year .

Ed Kowalczyk ( former lead singer of Live ) played King Tuts in September and it was incredible to see him there , I saw the band play years ago in stadium venues and to be there as he played such an intimate gig was a real highlight for me

I went to this gig for Heidi as I`d never heard of him but he put on a real show , when he played Lightning Crashes I had to laugh at Heidi standing with tears in her eyes.

We differ on the last two;The Stone Roses at Glasgow Green for me , 23 years was a long time to wait Being asked to fake play the saxophone on stage with Vigo Thieves at Wickerman , just because it gave the weekend a right good giggle at the end 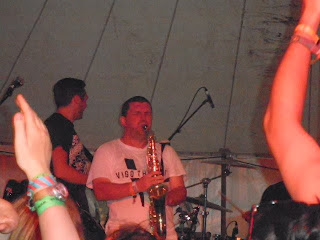 Suede at The Barrowlands because it was a new experience  for me , I went because of Gordon as they weren`t that big in Holland and I had heard of a couple of their songs but that's all . They were absolutely fantastic . 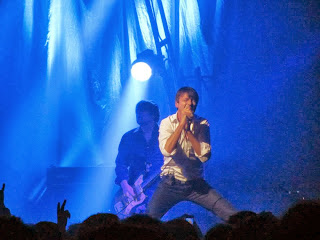 Kings Of Leon at Bellahouston park . Last time we saw them they were going through the motions and had major problems within the band . This time they all seemed to be loving what they did again and the nailed the gig .

5. We are really in thick of gig season right now. What gigs have you been to in November?

(It certainly has been!)
6. What do you have coming up in advance?
At the moment we have Australian Pink Floyd , Chrvches , Elbow , The Begbies and The Eagles booked for next year .

7. Do you have a special account for ticket money or anything?

We don`t really but we are lucky that we both work . We tend to be able to afford to go to whatever we want although we baulked at paying over a hundred quid each for Fleetwood Mac at The Hydro . We regretted not going for it almost immediately .

8. Is there anyone you haven't seen that you would like to see?

As I will never see Pink Floyd I`ll leave them out . Just now there are a few that we haven`t been able to go and see for one reason or another . Muse , Foo Fighters , Arcade Fire for me . We can add Pearl Jam and Metallica to those . In terms of venues I`d like to visit Red Rocks in Denver and Paradiso in Amsterdam.

9. What do you think of the music scene in Scotland?

The music scene in Scotland for touring acts is superb , there are plenty of great venues out there . It seems to us that plenty of bands want to come here because the crowds tend to know their stuff . There always seems  to be a huge difference in crowds from Edinburgh and Glasgow , east coast crowds tend to be less rowdy .

Venue wise we have more than our fair share of crackers . For us both nothing beats the barrowlands . The sound in there is always spot on and even though the place hasn't really aged well it still has a feel to it . The Vigo`s played there earlier this year supporting The Fratelli`s and I( Gordon ) managed to blag a back stage pass ( Cheers Murray ) and so I watched the gig from the side of the stage

The scene out there for up and coming bands is what they want to make of it . Glasgow has plenty of great small venues , Tuts , Nice and Sleazys , Maggie Mays , Broadcast and The Old Hairdressers to name but a few and they are all excellent for bands coming through . There are plenty of opportunities to get out and take in live music . Keep an eye out for a trio called Calm Fiasco , relatively new and sound pretty tight . There are no excuses for folk who love music not to get out there and take in gigs .


10. What have been your all-time 3 top gigs/shows that you have been to?

Pink Floyd in Rotterdam . It was Pink Floyd , 2 1/2 hours of musical and visual heaven . It felt
like being hypnotised en masse . An amazing experience .

Faithless at The Barrowlands in 2005 . I`d seen them 6 times before but we were almost at the front and the whole crowd just bounced for the entire show , it was special 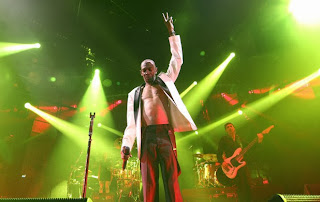 Bruce Springsteen in Holland in the early 2000`s . It was with the E Street band and the Boss is unbelievable . No visuals or gimmicks just the man giving it hell for 3 hours . His energy brings the crowd along with him .

Faithless at The Barrowlands in 2005 . Heidi won tickets via XFM and Maxi and Bliss just played their hearts out . I ended up shirtless at the front bouncing about like I was 19 instead of 39 . Insomnia is up there with the greatest tunes of all times in my opinion.

Sigur Ros at Connect in 2008 . Its hard to out this gig into words . Sigur Ros are a musical orgasm , just an incredible noise from them . The setting of Inveraray at dusk with a low sunset lighting up the background made it even more special . It was as close as I`ve come to a religious experience at a music event , it felt as if no-one else was there other than Heidi , I and the band . (I was at this and have to agree that it was very special)

Stone Roses at Glasgow Green June 1990 - June 2013 , The later gig felt like a continuation of the previous one , except we had all aged considerably .

11. Is there anything you dislike about going to live shows?

People too drunk to know where they are and people throwing pints . Why someone would pay that sort of money to be blitzed and not remember the experience is nothing short of a mystery to me  . Anyone throwing drink is just a prick , excuse the language , I can`t add anything to that .

Excessive use of camera phones , people using camera phones and camera phones . Put them away and just enjoy the gig , for Gods sake . Drunks and by that I mean the same as Gordon. Ticket prices are sometimes steeper than they should be
12. Who would you like to see play;a) The Hydrob) The Barrowlandsc) King Tuts Wah Wah Hut

a) Muse for me . Metallica for me
b) Augustines , the Barrowlands would suit them down to a tee . I`d like to see Kasabian in here
c) Anyone , Tuts is a special place no matter who plays it

Together we love music , it keeps us young . We`ll be gigging in our 70`s if we are still here

Why would we ever stop ?