Stone Roses : Made of Stone - a Shane Meadows flm

Sometimes I fantasise, when the streets are cold and lonely…

Last night I went to see ‘Made of Stone’, the Shane Meadows documentary on my all-time fave band; the Stone Roses.

The opening sequence is incredible, Ian Brown on the last night at Heaton Park comes down from the stage and walks along the front row, high fiving, punching (in a friendly way), shaking hands…the look on fans faces as he does this is one of sheer ecstasy, happiness and love. Brown remains super cool and takes a phone from someone and then takes a picture. The shot is played in super slo-mo, the quality of the picture on the big screen is crystal clear, over the footage is a clip of Alfred Hitchcock talking about what happiness means to him.

And so the film begins. Check the trailer below.

That opening sequence sets the tone for the whole film, it is a film for the fans by a fan, a love letter to the Stone Roses, a band who have been around in various guises for 30-years, shrouded in mystery at times, a band that have produced music that will live forever and be passed down from generation to generation. Meadows stars in the film alongside producer Mark Herbert and their enthusiasm comes across throughout.

5 highlights from the film

The footage from the comeback show is spine tingling, the beating heart of the film. In the Q&A after the film, Meadows admitted that was when he knew he had a film.

Imagine hearing the announcement that the Roses were playing a free gig and to get in you needed to get down to the box office with a CD, record, ticket or t-shirt to get in. The response that this generated just highlighted and confirmed how much this band is loved and adored. There was brilliant footage of people sprinting towards the venue clutching records adorned with Squire’s artwork, people in overalls, suits and ties, a Dad dragging a kid along as fast as he possibly could…there was that panic of getting there, the excitement of the possibility of seeing the Roses in a small venue and then the exhilaration of getting a ticket.

The look on peoples faces and their reaction (literally jumping for joy) was just superb to watch, it said it all in many ways, but we did get to hear from them. There was the guy who quit his job to run home to get his CD and get down there, the guy who had left his kid at the childminders long after they were due to get picked up, the builder who had just knocked down a wall on a house and left it unboarded up to get down there.. all walks of life, all utterly in love with the Stone Roses.

Then there was a guy just declaring his undying love for the band when pressed why he had rushed down; ‘You know and I know but you can't right it down can you?'

The band arrive, they look like they can’t wait to get out there. They gather backstage as ‘Stoned Love’ by the Supremes is blasted out the PA and then bound on stage. Mani grinning like a Cheshire cat, Ian taking it all in, Squire looking super cool and Reni getting to work on the drums.

One of the cameras cuts to Meadows watching from the side of the stage and he just looks at it and says ‘Jesus f**king Christ’.

The crowd is going mental as the rumbling bass line of ‘Adored’ kicks in. It is nuts, it is 20-years of pent up frustration that one of the best bands of all-time hadn’t been together, hadn’t been playing their majestic music to an ever increasing audience.

There is a great bit when the footage cuts to fans gathered outside, those that couldn’t get in. One guy says he offered a girl a job, then his car and just stopped short of his house for a ticket. She refused.

People are singing along to the guitar riff, the bass line, the almighty chorus and mimicking Reni on drums. There are football terrace style chants of ‘Roses, Roses’, people are dancing, jumping and generally having the night of their lives.

The film closes with footage of an extraordinary performance of ‘Fools Gold’. The sound of the crowd is cut off, so all that you are hearing is the sound of Brown, Squire, Mani and Reni as they lock into a groove before Squire unleashes psychedelic fireworks from his guitar. It is an astonishing display from the band and it is captured beautifully by the film crew (38 cameras). Mani and Reni are tight and loose all at once while Squire just goes mental and lets his inner Hendrix run wild.

Brown strolls down the front again as the film ends the way it began.

There is some great footage from the Roses secret rehearsal location. It is pretty rusty at first as they feel their way through ‘Something’s Burning’ 10-weeks from Heaton Park, the old magic is there, it just needs polished. 6-weeks to Heaton Park flashes up on screen as the band kick in with ‘Waterfall’ and it is magical. The closing outro instrumental is fired off in double quick time as the band share grins and knowing glances that they have found their groove.

Shane and Mark arrive at a country farm that has become the Roses secret lair. Their love for the band is clearly evident as they enter the room and look at Mani’s bass, Squire’s guitar and Shane discovers a letter from Reni on his drums and immediately says ‘that’s going in the scrapbook’. They then find two big boards with a list of Roses songs that they are considering for the setlist and pour over them like excited school kids; ‘what a set, can you imagine that?’ They have the golden ticket!

What becomes clear (at least to me) during the film is the fact that Reni is the glue that holds the Roses together, his natural talent is a joy to watch, he makes it look ridiculously easy; all over his drum kit but doing little shrugs and pulling faces to the camera and the band. All this while singing backing vocals. All of the band seem to buzz off his talent and feel more assured with the knowledge he is behind them. Even the footage from the reunion press conference highlights his wit, charm and how he unites the band.

All of the band have qualities that they bring to the table; they are stronger as people and as artists when they are together, but that backbeat, those drum rolls, the high hat action, the way his fellow band members look at him in awe and astonishment – Reni is the glue.

'It takes time for people to fall in love with you, but it's inevitable.' Ian Brown 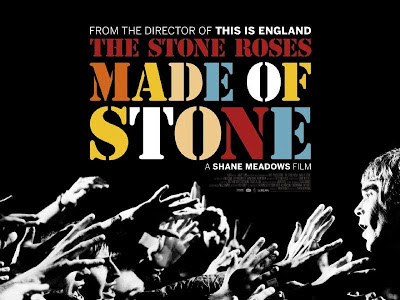