Serious Drugs - A film about the BMX Bandits

Yesterday I headed along to the Glasgow Film Theatre for the world premiere of ‘Serious Drugs’, a film/documentary about the cult guitar pop band, The BMX Bandits. 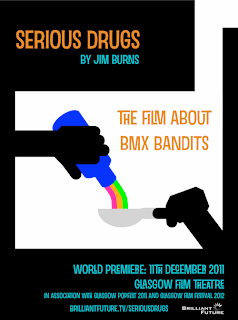 The producer is a guy called Jim Burns who discovered the music of the Bandits during a period of very heavy depression in his life. The revealing Q & A at the end of the film saw Jim really open up about this, describing a time when he was ‘emotionally numb’, he couldn’t feel anything good or bad. Yet somehow, the music of the BMX Bandits broke through the ‘numbness’ and reached Jim.

So Jim set about trying to discover ‘who or what are the BMX Bandits’, ‘what makes a BMX Bandit’ and ‘why can the songs of the BMX Bandits reach me when I am so down?’
The answer comes in the form of the leader of the BMX Bandits, Duglas T Stewart. The film, an incredibly personal project for Burns who funded the film himself, was shot over a 4-year period following Stewart and his fellow Bandits, interspersed with rare footage and photos from the Bandits career.


The Q&A at the end was relatively short, but it revealed a great deal. Burns had never picked up a camera before, let alone attempt (or even think about) making a film. That innocence probably helped to make the film as special as it is. It is clear from the start that there are no barriers between the band and Jim, he is accepted. Indeed Jim did say at the end of the Q&A that this is ‘the closest he will ever get to be in a band.’

To many people, the BMX Bandits are essentially Duglas T Stewart and he is naturally the focus for the film. However, throughout the film Duglas is very keen to highlight the importance of his fellow Bandits and how important they are to allow him to create the music he hears in his head. There is a great bit in the film where Duglas is creating a very colourful and neat BMX Bandits family tree. Norman Blake (Teenage Fanclub), Eugene Kelly (The Vaselines, Eugenius), Sean Dickson (Soup Dragons), Francis MacDonald (Teenage Fanclub) and David Scott (The Pearlfishers) are just some of the names that have contributed to the 25-years of music by the Bandits. Duglas may be the lead Bandit, but he realises the importance of his fellow Bandits.

The film takes us on a 25-year rollercoaster, discovering Stewart’s ability and desire to perform at an early age. Duglas reveals how he used to be taken around the classes at school to perform impressions and how he was particularly good at Frank Spencer! Early pictures of the Bandits show them busking in Sauchiehall Street with Duglas’ performance generating large crowds. There is also grainy footage from someone’s living room and back garden, everyone is always smiling, a feature that continues to this present day, regardless of who is involved with the band.

Humour is evident throughout the film, whether it is direct from Duglas, or via the producer. Nice words and reviews from the likes of Kurt Cobain, Sounds and the NME are shown directly before reviews that pan the Bandits. There is a hilarious interview where someone asks a young Duglas about being a sex symbol, some good stuff from Alan McGee and Duglas is on top form throughout, whether comic or candid.

It is all relatively good fun until the release of the single ‘Serious Drugs’. The film suddenly changes from being about a fun guitar pop band to commenting on depression. Stewart reveals how he was on medication when he met a new girlfriend and she told him she didn’t think he needed it. 3-weeks later she was saying that his medication could be stronger, hence the line ‘I said I don’t think I can take it much longer, she said ‘maybe your tablet should be stronger, get some serious drugs’, I need some serious love.’


I originally anticipated Jim Burns being shown in the film and talking about his own depression. Instead he allows Duglas to reflect on his own, which in turn reflects on Jim’s.

My personal highlight from the film is probably the scene where Duglas is in his kitchen making Cheese & Toast, a very un rock’n’roll (and therefore a very BMX Bandits) thing to do. It is late at night and Duglas can’t sleep. He has been warned that cheese can bring nightmares, yet he finds that it brings him good dreams, so he continues to make cheese and toast at night. Duglas pours his heart into his songs, he lays himself bare. So he writes a song called ‘Cheese & Toast’. The song is on the 2006 album ‘My Chain’, the album that got Jim Burns into the BMX Bandits.

The last two Bandits albums have really seen them develop and mature. The lovingly endearing ramshackle guitar pop of debut single ‘E102’ has grown into brilliant pop, but in a more Beach Boys (Brian Wilson is a hero for Stewart) vein. The layers, harmonies and musical ability of the band has developed (as you would imagine over 25-years) considerably. Despite this, many of the media still view BMX Bandits as some kind of joke group. Something referred to a few times throughout the film.

I can only hope that this film may readdress that. Stewart writes songs about love, life and hope. Simple, yet powerful, funny at times, moving at others.

The last two albums have seen the addition of Rachel Allison (vocals) and David Scott (keys and many other things) and they seem to have helped inspire Stewart to some of his best work to date. Not that he can’t rely on others to help when it comes to the Bandits.


Norman Blake, Stewart’s great friend, features throughout the film and towards the end he likens being a BMX Bandit to being an Army Reserve; ‘you could get called up any time.’ Indeed Blake features on stage at the Bandits 25th anniversary show at Oran Mor in January 2011, a few songs are included in the film.


So how would you summarise Serious Drugs? Well, it is kind of like the Bandits; There is more than a splash of humour and fun, it is one man’s vision – yet with the help of others, there are many layers to it and ultimately it may prove to have a cult audience.


I was tempted to ask Jim at the Q&A at the end what he intends to do with the film now. However I opted not to. He is taking a well deserved holiday and he has seen the result of 4-years of work with his favourite band displayed on the big screen in his favourite cinema surrounded by family, friends and fans.


I do hope that Jim finds the time and energy to take this further – would BBC Scotland/BBC3 show the film? Could he take it to some independent film festivals?


Anyway, Jim has captured the spirit of one of Scotland's most endearing bands and artists. I look forward to hearing what Duglas and the Bandits come up with next.
Posted by everythingflows at 13:54