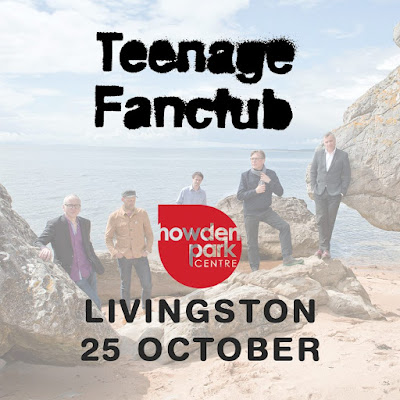 The anticipation surrounding Teenage Fanclub’s upcoming Creation Years tour has been pretty massive. Taking over venues for three nights in a row playing all the Creation albums cover to cover with some b-sides and rarities thrown in for good measure is a brilliant prospect. With over 70 songs being rehearsed with two former drummers though, seemingly quite a task. However, judging from the warm up show in Livingston on Thursday night, the band are in wonderful shape and seeing them all together at once is joyous, a feeling which will only swell come the first of three nights at the Glasgow Barrowlands on Sunday.

The Howden Park Centre was a perfect venue for this. Intimate 300 seated theatre in West Lothian. Thankfully, I was one of the very first people to phone the box office the morning they went on sale, just a week before, and bagged a ticket at the very middle of the front row. Nobody was really sure what to expect in terms of a set list, and seeing the evening was split into two with a short interval in between, it only added to the speculation.

Seeing George Borowski pre-show tuning things up and adjusting things never fails to make me smile. They soon emerge and clatter their way into Thirteen’s “Hang On” and songs from side A of that record were plentiful. Poor Brendan on drums was jokingly ready to expire after an explosive, quick fire “Radio” with Dave and Frances present on stage adding keys and lap-steels to really enhance the on stage sound.

The elephant in the room is of course Gerry’s departure from the band following these UK Creation dates, and his vocal harmonising with Norman is so glorious and uplifting that it brings his now limited time with the band back into sharp focus. Nevertheless, he takes centre stage with a green telecaster, “Painted by us ourselves” Norman kids, and eases his way into Bandwagonesque’s “December.” Act one is a healthy mixture of Bandwagonesque and Thirteen and I was really happy to see “I Don’t Know” thrown in there, too. Norman was interjecting about his favourite TV shows again, reminiscent of the Shepherd’s Bush gig last year. 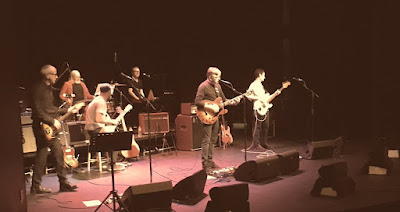 Brendan’s drumming is fast, sharp and showboating, here we see a man who was clearly a stand-up comic in another life with his on stage patter, regularly leaving Norman and Gerry laughing during songs. They conclude with a rousing “The Concept”, with a select few along from me in the front row trying to encourage the crowd to stand, which admittedly I would have loved, but with great power comes great responsibility, and having already gained a notorious reputation on the Fanclub circuit for an Edinburgh stage invasion two years back, I didn’t want to be “that young dick down the front”, so stayed firmly in my seat.

After a quick interval of toilet trips and restocking the cans of Guinness, back down the front for Act Two. This presented a bit of a broader mix of Grand Prix, Songs From Northern Britain and Howdy!

Paul Quinn takes the place of Brendan on drums and the sound in this small theatre is genuinely fantastic, and the way the band all gel with so many on stage at once is brilliant to watch, even from a non-musicians perspective like mine. Particular highlights are “I Need Direction” which sounded unbelievable, and “Accidental Life.” This all proving to be a tantalising taste of what’s to come on the upcoming tour so I shall not divulge and dissect anything too greatly.

Norman is the jack of all trades with some mighty fine whistling during “Mellow Doubt” and the evening closes with a triumphant “Don’t Look Back” asserting how brilliant a singer Gerry really is. All in all, this is exactly everything you want from a wee, intimate warm up show; plenty of banter, an adoring little crowd and a nice healthy spread of album tracks. All roads lead to the Barrowlands in just over 48 hours time as I type this sentence, hence why I’ll keep this one short and sweet, where all these brilliant records will get the cover to cover live plays that they so thoroughly deserve. It’ll be a brilliant and quite emotional few days for sure, but I wouldn’t expect anything less from my favourite band in the whole world.

See you in McChuills on Monday beforehand, Fanclub.
Mark Hannah.