Last night I caught two stunning bands in the basement of Nice n Sleazy, both blew me away.

I introduced L-Space in a previous blog. I was really looking forward to seeing them live and they didn't disappoint. Singer Lily wore a headband that lit up and started the set kneeling in front of a tiny keyboard at the front of the stage, picking out a beautiful melody, covered by an umbrella that also lit up. Her band mates created a beautiful wall of noise to back her up.

The 4-piece were refreshingly different to any band I have seen in Glasgow in a while. Gordon Johnstone played some brilliant riffs and melodies on guitar, before at times unleashing some ferocious white noise. Synth player Maura Keane looked super cool, creating some great sounds, whilst bassist Dickson Teller kept the groove.

Blue Flowers was a highlight for me as I've really fallen for that song, but in truth the whole set was incredibly impressive and there were knowing nods from the people around me that we were witnessing a band with huge potential. The crowd responded with increasing applause and hours after each song. A great set. 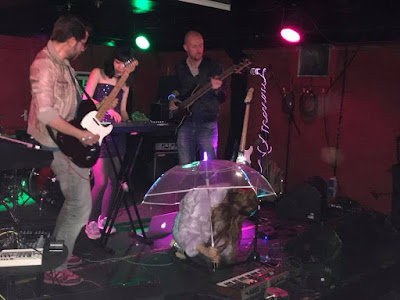 Sun Rose were launching their debut LP The Essential Luxury by playing their first ever show after a grand total of four rehearsals. The album was created by Albert Kawmi, Calum Muir and Gus Wemyss between Glasgow and Manchester, with emails playing an important role.

The trio gradually pieced together a stunning album full of inventive beats, breaks, layers, sounds, melodies and harmonies. With no band name, social media or gigs to concern themselves with, this gave them an almost unique freedom in todays day and age to take their time.

I'll be blogging about the sublime and blissful album in the very near future. What were they like live?

The trio became a 6-piece for the night; lining up with Calum and Gus playing back to back synths, Albert on bongos, maracas and very occasional synth, backed by guitar, bass and drums. 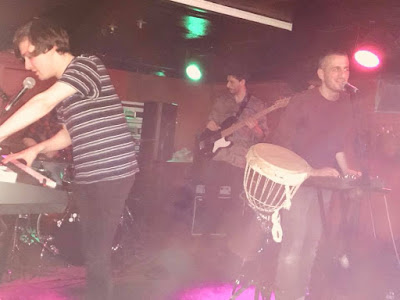 What a treat! The band played superbly. Albert told us how it was his first live show in 4-years. He looked confident and full of joy. Calum and Gus looked deep in concentration, playing synths, getting involved in funky percussion and both complimented Albert superbly with harmonies and backing vocals. Their band mates looked delighted to be playing to a packed Sleazys and to be involved in creating such sublime music live.

Debut single Smirk gave us an indication of the style and capabilities of Sun Rose live. They were on it - funky, sublime and able to recreate the layers and changes in pace that they beautifully offer on their album,

Dry In The Water was outstanding; surging upwards, dropping back to almost nothing before soaring sky high and taking the audience on a journey with them.

Second single Minima was blissful and the band had the confidence not only to sing a song in Arabic but to also drop in a cover version of The Pointer Sisters Automatic.

Singer Albert was quick to thank the band, their friend who drove them to and from Manchester, the audience and then his wife Lynsey who was celebrating her birthday. The audience sing song was followed by Albert coming into the audience for a kiss. There was a collective awwwww, a nice touch as Albert when back on stage and told us of how he broke the news to Lynsey that they were launching the album on her birthday.

The band ended their set with Counting Upwards, the beautiful closing number from their album. They got lost in the gorgeous sounds they were producing and there is a section where things just build to a euphoric mantra.

There was no encore. Just grateful thanks to the audience and to Last Night From Glasgow who Albert said the album and gig wouldn't have happened without.

What will they do next? Will they play again? A packed Sleazys will hope so. And for any festival promoters reading this - get them booked. Blissful, funky and euphoric.

Album review to follow. Check it on Spotify HERE or order vinyl HERE 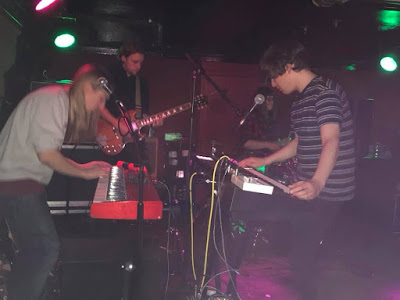