As I approach the tender age of 40 I have been reminiscing a lot about music I loved 20-years ago. I think it is all part of a mini mid-life crisis! So much happened back in 1994 and into 1995 - Kurt's suicide, Oasis, Britpop, the demise of the Roses....

A year after Kurt's passing, April 1995 was all about one band - Oasis. I had fallen for them big style in 1994 when they burst on to the scene with Supersonic, following it with regular singles backed with outstanding b-sides and that glorious euphoric debut album Definitely Maybe.

Word was definitely out though, Oasis were heading towards arenas/stadiums and for some reason they chose Sheffield Arena as their first arena show....with rumours they wouldn't be playing anywhere nearly as many UK gigs as they did in 1994....my brother Ross and best mate Reddy decided we were going. 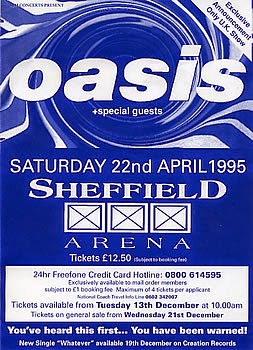 There was a bus going from Glasgow, stopping off at Hamilton Services early in the morning, so that is where we decided to get on.

Reddy came to stay at ours the night before and although we had planned a quiet one Ross and Reddy proceeded to drink the carry out they had bought for the bus! I remember we watched tapes of Oasis TV performances, including a recent one on the White Room.

Oasis were on a different level from 1994-96. The songs, look, attitude, live shows. They put their foot on the gas and didn't stop, leaving other bands trailing in their wake. Releasing singles every few months containing incredible b-sides, 2 classic albums and playing a host of memorable shows culminating in 2-nights at Knebworth.


There was a tremendous sense of anticipation as my Dad dropped us at Hamilton Services the next day. We boarded the bus and unsurprisingly Ross and Reddy crashed out as I chatted to a few people, enjoyed some good music and then opened a 2-litre bottle of Strongbow to drink on the way down. Good times.

We approached Sheffield and I remember being amazed at how industrial it was - and this was from someone whose Dad worked in the shadow of Ravenscraig. Sheffield took it to another level with huge sites spewing industrial fumes into the air.... and it looked like a total dump. What the hell were Oasis doing playing here?

Ross and Reddy were in the mood for alcohol when we parked at the Arena with loads of time until the gig, so off we went in search of some. I was pleasantly pissed as it was after finishing my cider. The two of them bought a bottle of vodka and some cheap imitation Coca Cola for something like 21p. They then decided to mix it and pass it back and forth until they finished it.

They still blame the cheap Coca Cola for what happened next! However, that shall remain between us  and not for this blog. All I can say is that one of them missed the entire show!

April 1995 was a huge month for Oasis; their first number 1 with Some Might Say, a new drummer - Sheffield was Tony McCarroll's last gig, there was the filming of the Live By The Sea DVD, a ferocious live performance on the White Room and Sheffield Arena.

The whole show is available to listen to HERE 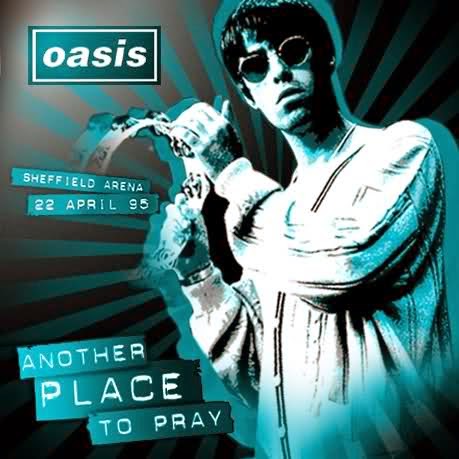 20-years down the line, the memories are a little faded but I remember the atmosphere in the arena was absolutely electric; it must have been the first opportunity for many to see Oasis live following their success with Whatever and the forthcoming Some Might Say. A barrier had been set up 2/3 of the way down the standing area to prevent crushing at the front. I tried to jump it a good half dozen times through the show but security caught me every time.

Listening back to the show brings back some memories. The band are on fire, ripping through Rock n Roll Star with Liam sounding sensational and also off his head and they fire straight into the groove of Columbia.

Liam mentions the barrier in the crowd and wants everyone in together before romping through Digsy's Dinner and blasting through Some Might Say.

Liam didn't move much on stage but you just could not take your eyes off him, he had (and still has) an edge. You didn't know what he was going to do or say next, but you knew he was giving it 110% and that night (and every single day) he was a Rock n Roll Star.

It's a 90-minute set delivered in blistering form by a band who had been on the road for over a year. Listen to Liam ripping through Headshrinker - pure Pistols.

Oasis ooze confidence as they throw in b-sides and Noel takes centre stage for an acoustic section that allows everyone the opportunity to catch their breath.

Noel shows off by playing Don't Look Back In Anger which he 'only finished on Tuesday' and at this stage it also didn't have a title.

Oasis romped through a 19 song set, only a year after the release of their first single. They had the quality, the quantity and two total stars in Liam and Noel.

They blitzed through 1995 and that summer headlined Glastonbury and played two memorable shows at Irvine Beach in Scotland. Earls Court would follow later in the year.

Which is better Pepsi or Coke?
PARTICIPATE IN THE POLL and you could win a prepaid VISA gift card!

Loved reading this! It was the first gig I ever went to as a bright-eyed 13 year old. Nothing would be the same from that night onwards.