Back in October, a week before it opened, I was invited for a lunchtime look around PCL’s new venue – Broadcast, formerly known as The Local.

It is a cracking little venue, the upstairs bar is very cool with it’s open brick walls and a long classy looking bar. The chef formerly worked at the Crabshakk, so they are making a big play on the food front as well. The dressing room is possibly the coolest in Glasgow (not that I have been to every dressing room to compare them all), the sound system is state of the art (courtesy of one of the venues partners) and the vibe in the basement gig/club is one of warehouse cool.

In terms of size it is pretty much the same as PCL’s previous venue, the Captains Rest. That is where the similarities end though – this is a cool and modern bar with excellent facilities, a far cry from the shabby chic of the Captains Rest.

Anyway, the visit got me thinking about the incredible number of venues packed into our city centre, we are music crazy, but can they all survive?

Broadcast is the newest venue to Glasgow, the UNESCO City of Music. The city is bursting with venues of all shapes and sizes offering live music.

Have I covered them all? 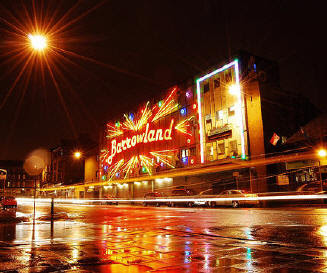 Barrowlands – the legendary Barrowlands has been hosting live music and dancing for decades. I have experienced some of the best nights/gigs of my life in this venue, bouncing on the hallowed sprung dancefloor and singing along with all my heart. I would always encourage a touring band to choose the Barrowlands over the Academy any day of the week purely for the atmosphere a Barrowlands crowd can generate. There is also the small Barrowlands 2 downstairs.

McChuill’s – Just along the road from the Barras is one of my fave pubs in Glasgow and it also offers live music. There are worse places a new band could play as McChuills is a big music pub, especially keen on vintage mod sounds.

Maggie Mays – Despite being at (what some would call) the ‘wrong end of town’. Maggie Mays has built a good reputation for live bands and indeed has won awards. They have invested money in the downstairs basement to keep up with the competition and have a friendly and pro-active approach to bookings.

13th Note – I have fond memories of the 13th Note as it is where I put on my first gigs as a promoter with Futuristic Retro Champions. Brendan O’Hare (former drummer with Teenage Fanclub) used to be the sound engineer which was an added bonus. The great thing about the Note was that if they made a certain amount at the bar (it used to be over £200) then you got the venue for free! So if you pack it out you can make a considerable amount of money.

Mono – An under-used venue in my opinion. I love the whole vibe of Mono, proudly independent, it has a record shop, Stephen Pastel works there…I just wish it did more and invested in a backline and PA system in order for more bands to play there.

St Andrews in the Square – Gorgeous building where my wife and I had our wedding. I caught Rachel Sermanni here back in January and it tends to mainly be used for Celtic Connections, weddings and ceilidhs.

Old Fruitmarket – Cracking venue with bags of character where I once stood next to Sean Lennon after he supported Air circa 2001.

Merchant City Halls – This isn’t used very regularly for the typr of gigs I go to but I did catch Joanna Newsom playing there and it was incredible, brilliant sound and acoustics.

Classic Grand – The upstairs hall looks fantastic, it isn’t used a great deal and they do seem to be putting on lots of metal and industrial nights.

The Arches - Definitely more suited to club nights than gigs due to the fact the sound can 'escape' from one arch into another, but still a brilliant venue with a real atmosphere. The Cafe Bar is a great place to hang out.

Subclub – Doesn’t put on as many gigs as it used to. I once caught The Kills there and my mate was lucky enough to see Franz Ferdinand. A Glasgow institution.

Pivo Pivo - Despite being close to Stereo, the Old Hairdressers and The Arches, Pivo Pivo isn't deemed particularly cool. That doesn't stop them putting on gigs practically every night though. More suited to new bands rather than established.

The Admiral - Good basement for club/band nights, more suited to the former if honest. Holds the cracking Melting Pot night.

Flat 0/1 - great concept - a party flat with great tunes, live music and pretty cheap booze. If only they could invest in a decent sound system (note - they may have done since I was last in). It is definitely all about the vibe in here rather than quality sound. Home of MILK and some of Glasgow's coolest students.

Bloc - a party pub since it opened that made a name for itself in music with a little help from Detour, LAID and the Blochestra sessions. Always friendly and happening with excellent independent promoters like Gerry Blythe from New Life.

Slouch - competing with Flat 0/1 and Bloc for cool new music wasn't going to be easy and although Slouch tried for a while they are now distancing themselves by going for covers, blues and the odd young band that isn't cool enough for the other two. Good pub grub.

Sleazy’s - a Glasgow institution with its basement venue having played hosts to pretty much everyone that has ever done anything of note in the Scottish music scene and beloved of guests from across the waters.

Broadcast - as mentioned at the start of this article, the new PCL venue to replace the Captains Rest.

The Art School - the rebranding of Capitol to The Art School has totally changed the perception of this venue, sadly I wasn't particularly impressed with it when I co-booked it for a show earlier this year. Despite selling it out 6-weeks in advance and warning the management to have enough bar staff on they didn't bother their asses. With Sleazys and Broadcast just across the road it will be interesting to see how the Art School competes on a live music front.

The Garage - servicing students for decades, I used to go clubbing there when I was a mere teenager. One year in the mid-90's i saw Radiohead touring The Bends, The Boo Radleys with Wake Up Boo and The Bluetones. It doesn't host as many gigs as it once did but it still packs an impressive punch when it does.

G2 - the smaller venue of The Garage

CCA - I love the CCA, it is still pretty under-used in terms of gigs and club nights. I did catch a fantastic performance from Gerry Love's Lightships earlier in the year. Great bars and vibe.

ABC & ABC2 - The ABC is a world class venue. The set up is just pretty perfect for a gig; large wide stage, bar at the back, wee bar at the side, easily accessible toilets (take note Academy), balcony with another bar....sound system is great too. Near enough replicated in minature form with ABC2.

Oran Mor - I do like Oran Mor. The stage is nice and high, the sound is good, it is handy for the underground and loads of other lovely bars nearby.

Brel - One of my fave bars in Glasgow and I've seen some cracking gigs in there too, notably Remember Remember earlier this year.

Jim Lambie's Poetry Club - in an old railway arch next to SWG3 this is hush, hush cool for now (still no website or Social Media). Invite only for gigs and parties. They don't even have a website. Thankfully my sisters band TeenCanteen were invited to play and it is an incredible venue, really cool.

King Tuts - My fave venue, I wonder how many gigs I have been to in here?! Highlights over the (almost 20) years of going there include; Beck (just after 'Loser' was released), The White Stripes, Arthur Lee & Love (twice), John Squire (when he opened with the instrumental of 'Resurrection') and many, many more.

The Academy - I've been to some good gigs here but the Barrowlands pisses all over it for me. The lack of toilets on the ground floor for guys is just ridiculous. That said it sounds brilliant and it has a certain charm, I guess I am a little blinded by my love for the Barrowlands and the fact The Academy has robbed the Barras of some cracking gigs.

SECC - Huge, cavernous and inpersonal...but necessary for bands of a certain standing. I have still been to some  exceptional gigs here, notably U2, Dylan in an all-standing arena, Neil Young and The Who. Also has the Armadillo next door where I once went to see Kylie and got a seat 3-rows from the front - happy days!

The Hydro/SHAG - Coming soon, looking good and will be capable of bringing some huge names and shows to Glasgow.
Posted by everythingflows at 12:39

I knew that my dream of climbing all the Munro's was a little unrealistic...perhaps though, this is more achievable... I must catch up, although being out the country for 17 years must count for something. Great article Murray, now where next:)
Graeme