New Build and Nevada Base at Captain's Rest, 7th March 2012

I am pretty manic at work just now so I am only just getting around to blogging about a cracking gig last week...
Tuesday night saw New Build, consisting of Felix Martin and Al Doyle from Hot Chip (Doyle also plays/tours withLCD Soundsystem) and friends, roll into town to play only their sixth ever gig at the tiny Captains Rest. Hot Chip and LCD Soundsystem are two of my favourite acts from the last 10-years and although Martin and Doyle are not the main creative forces in either of those bands (see Goddard, Taylor and Murphy), I was still keen to see what they could conjur up in a dark crammed basement. 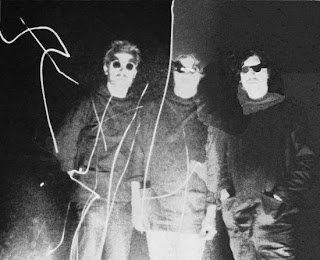 2012 is shaping up to be a huge year for Hot Chip as they are set to release their fifth album, their first for their new label Domino, and with Goddard already releasing an album this year under the moniker 2-Bears, the New Build project seems to point to members of Hot Chip being at something of a creative peak.
New Build’s debut album Yesterday Was Lived & Lost was released on Monday on the bands own Lanark Recordings label. With such a DIY approach to the release and tour, Nevada Base were hand picked to support New Build and drum up interest in the Glasgow electro community; not a hard task when you mention the names Hot Chip and LCD Soundsystem.
The gig ended up being a complete sell out and there was a real sense of anticipation in the air as I headed along to the venue at the back of 8pm. I met James from Nevada Base outside and asked how soundcheck was, only to discover things were running late. So I headed down to the basement to check what was going on, in perfect time to catch New Build soundchecking. Their 7-piece live band were ripping it up and this was only the soundcheck.
I had the pleasure of speaking at length with Felix from the band about the label (Lanark - after the book by Alistair Gray), the artwork (by his Dad and his brother) and the music of New Build and Hot Chip. Hot Chip had just confirmed that their fifth album will be released by Domino and Felix is pretty excited about it. I ended up offering to do New Build's merchandise for them and got a free album as a result - what a nice guy. A review will follow shortly.
With a queue developing upstairs Nevada Base blasted through a soundcheck and it was doors open at 9.10pm with Nevada Base on stage to a packed crowd at 9.30pm.
Nevada Base played a cracking set, gathering conifdence from the off by the large majority of the crowd that were there as a result of them. The addition of a drummer to the line-up in the shape of Calum Muir has really helped loosen the band, allowing them to jam on songs and take things futher. They certainly did that through the set with new song 'Chameleon' being a real highlight, starting off with an almost reggae groove before going off on one. 'Kisses Her Bullets' was also a standout with singer Albert getting lost in the music and it was smiles all round on stage. Closing with 'If I'm Late' was a great move, the crowd danced and chanted along with the chorus and hooks, this was a blinding set and the crowd and band knew it.
New Build didn't waste much time in following Nevada Base on stage and they quickly slipped into top gear. Third song in 'Medication' was introduced as 'a short pop song'. A brilliant short pop song would have done it more justice.
Taking inspiration from house and techno as well as “the eccentricities of artists such as The Human League, Peter Gabriel, Robert Wyatt, Chris & Cosey, Cabaret Voltaire and Eno”, New Build played the whole album and had great fun in doing just that with Al Doyle beaming from ear to ear.
With drums and percussion, including a steel drum at times, the sound was rich and diverse, the melodies were certainly Hot Chip-esque. The single 'Do You Not Feel Loved?' went down a treat whilst album closer 'Silence and the Muttering' was a shimmering masterpiece.
New Build's performance and on stage chemistry backed up the feeling I get from their artwork, the fact they have released this on their own label (not for want of offers, but to squeeze a release in with all other Hot Chip related activities they had to do it) and their music - they are doing it because they love it and it shows.
Check the album, streaming from their website. It is already a favourite of mine and I will review it on a later bog.
Posted by everythingflows at 12:48