Last night I headed to Stereo in the centre of Glasgow for the album launch of 'Greater Inventions' by For Abel.


You can listed to all of For Abel's album on Soundcloud at http://soundcloud.com/forabel/sets before deciding if you would like to buy a copy through Flowers In The Dustbin (who released Nevada Base's debut single) or itunes. 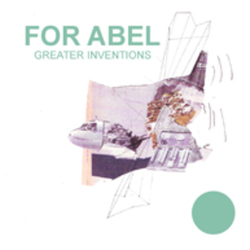 I arrived at Stereo at 8.45pm and I didn't have too long to wait until For Abel took to the stage. They started as they meant to go on with a rather epic Joy Division-esque number.


If For Abel have any desire to headline a festival, they got a good indication of what it was like to play to a crowd with a 10 yard gap in between them, as their fans stood well back, not wanting to be 'down the front.'


Not the band cared one bit about that. They were 'in the zone' with frontman Robert Armstrong easily moving from literary musings to simple guitar pop-punk.


I'm still learning the names of For Abel's songs, however the opening track from their album 'Telephone' was excellent; spiky guitars and the kind of New Wave pop punk feel that gets straight to the point with the chorus delivered in under 45 seconds.

'I just wish that you would pick up your telephone to me.' 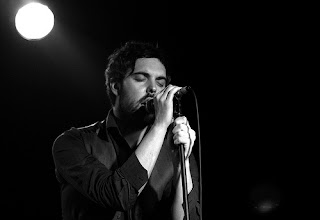 'On TV' was sharper, faster and more lively than the recorded version and the crowd responded accordingly with some dancing at the front, while 'Yorkshire' was one of my personal highlights; the ferocious guitar and bass riffing reminded me of Senseless Things from my youth.
When For Abel are at their best they have fantastic potential, although I must admit the odd song did pass me by. It will be interesting to see what kind of stuff they record next, as some of the stuff was clearly aiming for the stars; 'First Kiling' is one example.
'Broken Hands' is another, it lasts for over 5-minutes on the record, last night it must have gone on for well over that. By this point the band were really going for it, clearly tight on stage and off it. The atmospheric opening breaks into a melodic guitar riff that builds in time with the vocals.
'this could be with you, lets be somebody, lets just make things new, like anybody too'
For Abel are certainly able (sorry) and when they are at their best they bring Joy Division and The National to mind (they were once called The Nacional). It was a good gig, the sound system in Stereo is one of the best in Glasgow and they also have one of the best sound engineers in Shona. It will be interesting to see what they do next.
Full credit to Flowers in the Dustbin for releasing records by Nevada Base and For Abel already this year; clearly a label with a good ear for music in Glasgow.
Posted by everythingflows at 10:36

Labels: flowers in the dustbin, for abel, Glasgow, joy division, Stereo, the national