Primal Scream blew my mind on Saturday night at the Manchester Apollo on Saturday night as they revisited their seminal album ‘Screamadelica’ to mark the 20th anniversary of its release.
Primal Scream are one of a handful of bands that I have seen that make a gig more like an occasion, a cup final if you will and on Saturday night there was no doubt that they were ‘up for it’.
In many ways it was the perfect day for me. A sunshine drive down to Manchester with my good friend Phil and my wife Lynn, blasting out a stupendous Radio 1 essential mix by the DJ Greg Wilson. We arrived at my brothers in Sale for 11.30am and celebrated with a morning beer before Kirsty and Lynn drove us to Old Trafford. Ross had wangled hospitality for himself, while Phil and I went to the pub to pick up our tickets from the Glasgow Supporters Club and catch up with some friends over a few more beers. United won 1-0, only really starting to play in the last 20-minutes after being reduced to 10 men after Evans had been sent off. Berbatov scored the winner right in front of us at the Scoreboard End.
We hooked back up with Ross, Kirsty and Lynn along with Phil’s mate Josh and got the tram into town, heading to an excellent bar in the Northern Quarter called; The Northern. Lynn and Kirsty headed back to Sale while the lads stayed out and moved on to another pub that I forget the name of, meeting Josh’s brother Zak who seemed to know absolutely everyone in the place. He had been hoping to get a guest pass for the gig as he is friends with Mani but told us in his broad Mancunian accent; ‘Mani wasn’t allowed any guest passes as if he was allowed one he’s need a thousand.’
At 9pm we bid farewell to Josh and Zak and hailed a cab to get to the Apollo. It was already pretty busy when we arrived, with DJ Andrew Weatherall playing some reggae and dub, heavy on the bass. A 5-piece support band came on and nobody seemed to know who they were, they blasted out some American Radio friendly garage-pop, with the three guitars sounding fantastic and then left Weatherall to get the crowd in the mood.
Primal Scream bounded on to the stage shortly after 11pm, Bobby Gillespie looked ‘up for it’, skipping to the front of the stage;
‘Hello Manchester, we’re Primal Scream and we’re gonna play Screamadelica, this is Movin’ on Up.’ 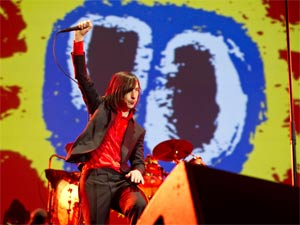 The band slipped effortlessly into gear, with Innes stage right and Mani skulking about by his bass stage left. The presence of a backing singer for the ‘gospel’ sections lifted the song and Gillespie looked like he was having the time of his life, playing to the crowd by dancing along the front of the stage and encouraging them to join in at the end.
It was straight into ‘Slip Inside This House’, swiftly followed by an immense ‘Don’t Fight It Feel It’. There were certainly plenty of people ‘feeling it’ in the audience. The large screen at the back of the stage featured artwork from the Glasgow artist Jim Lambie that captured the feel of the songs tremendously and as the night went on it felt like the music, band and artwork all became one.
Gillespie slowed it down with a gorgeous ‘Damaged’ before a beautifully trippy ‘I’m Coming Down’ and the psychedelic nursery rhyme ‘Shine Like Stars’, changing the order of the album to suit the live set.
The instrumental  ‘Inner Flight’ was another moment of sheer beauty, but the closing section was quite simply mind blowing.
‘Higher Than The Sun’ segued into ‘the dub symphony’ and it seemed to go on for ages, the band and audience lost in the music. It was unbelievable, difficult to describe how amazing it was.
‘Loaded’ was next, Gillespie conducting the crowd to jump, dance and clap along.
It got better with an epic closing version of ‘Come Together’ with Gillespie singing my favourite Farley mix; ‘Kiss me, won’t you won’t you kiss me.....’ ending with the album version and everyone’s hands in the air in moment of euphoric bliss.
The band went off stage to regroup and give the audience time to get their breath, everyone around me was gasping in disbelief at the performance.
Gillespie bounded back on; ‘d’ye wanna hear some rock’n’roll, d’ye wanna hear some rock’n’roll?’ The Scream Team kicked back into action, charging through ‘Country Girl’, ‘Jailbird’ and ‘Rocks’, finally leaving the stage just after 1am. I wanted them to keep on going.
WOW.
I’ve been to some special gigs in my time and experienced some genuinely amazing moments and this is up there. Screamadelica is one of those landmark albums and for the band to revisit it in such an epic manner was just mind blowing. The version of ‘Higher Than The Sun’ was utterly magical and the closing double blow of ‘Loaded’ and ‘Come Together’ just about took the roof off the place.
The band were on fire throughout, the horn section in ‘I’m Coming Down’, the gospel singer generating love and soul, Mani creating good vibrations and Andrew Innes and Bobby Gillespie charging about lost in the music they created 20-years previously.
Stunnning, if I go to a better gig this year I will be pleasantly surprised.
Posted by everythingflows at 03:47