Last night I ventured through to Edinburgh to catch the final show of Conquering Animal Sound's (I'll refer to them as CAS for the rest of this blog) tour to promote their debut album 'Kammerspiel'.

With Miaoux Miaoux and Esperi supporting it was an outstanding line-up that the promoters This Is Music had collated and the Edinburgh music scene was out in force to catch it.

I tend to skip over any Rugby features in the sports section of The Times, so I was quite taken aback by the swarms of Scotland and Wales supporters that were wandering around shouting, pi$$ing in the streets and falling about. There were also the usual groups of stags that congregate in Edinburgh every weekend.

I picked my way through to get to Sneaky Petes just prior to 7pm and met up with Julian (Miaoux Miaoux). I got chatting to Chris who is effectively Esperi and discovered he is a lovely guy. I'd caught one of his shows in Glasgow last year when he played with a guy from Portugal called Noiserv and I had really enjoyed his songs. Esperi's latest single on Olive Grove Records was a cracker and he told me he had plans to record an album with a band, complete with string section and more. Considering the layers of sound that Chris can create on his own, then the album will be interesting to hear.

The venue filled quickly, with the promoters having cupcakes spelling CAS's name for the first folks through the door. Esperi's solo set can be very gentle and quiet at times and it is to his credit that his music captivated the packed venue to the extent where you could hear a pin drop. Top marks to the polite Edinburgh audience. The highlights of Esperi's set was a song I had seen/heard him play the last time I saw him, I did ask him the name of it afterwards but I can't remember! It may have involved the words cats and dogs, but maybe not! Anyway it showcased what he is all about, making something gorgeous out of practically nothing, playing a variety of instruments and looping and layering them into something sublime. 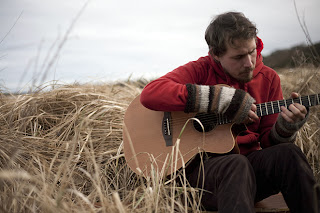 (Esperi)
Miaoux Miaoux was up next and by this point Nick from Sneaky Petes was considering it a sell-out, he did shortly afterwards. Miaoux Miaoux picked up the beat from Esperi and he introduced two new songs into his set, including the future pop-dance smash 'Hey Sound' that Jamie from CAS described as 'song of the year'. 'Hrvatski' was brilliant and Julian's performance of 'Knitted' was the best I have seen to date;
it's too late for you, it's too late for me
Julian looked lost in the music, looping beats and synth riffs and then jamming along on his guitar at times, dancing with a smile on his face at others. With a number of further shows in Glasgow and Edinburgh planned over the next couple of months I would highly recommend checking him out. 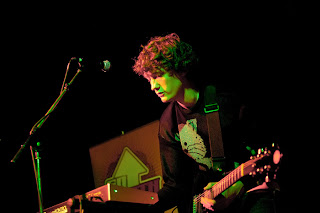 So it was on to the headliners CAS, a duo consisting of James Scott and Anneke Kapman. Jamie also records under the guise of Japanese War Effort and also plays in Barn Owl
The duo quickly got into their stride. The rather gorgeous Anneke had two mics on stage to help with her layering vocals and harmonies, while Jamie was busy playing guitar and a bank of electronic equipment. At other times Anneke played what looked like a toy harp. 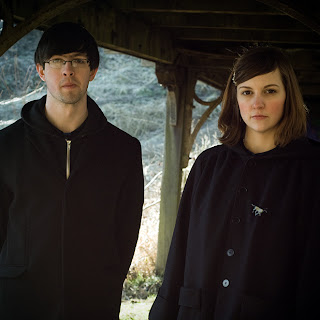 Their are elements of Bjork and Liz Fraser in Anneke's vocal style and delivery, but she is completely herself, commanding the attention of the crowd, looking confident and stylish. Jamie took the time to thank the crowd on several occasions and his warm persona transferred well to the stage.
CAS are alternative, yet accessible, leftfield yet with a pop edge. I said that Esperi seemed to create songs out of nothing and CAS are similar in a way. They started one song by sampling and looping their finger clicks yet before you new it a beautiful soundscape was being gently lifted towards our ears.

As I only bought the album after the show I didn't know the names of the songs, but after listening to it earlier today I would say that Flinch was my personal highlight from their quite stunning set. A simple 4/4 beat with the aforementioned toy harp and Anneke's dreamy vocals.


I will be you and you will be me
CAS were sublime last night, I went in not knowing what to expect and came away thoroughly impressed. I'm currently on my second listen of the album and I can already tell that it is one that I will return to and discover new sounds and delights time and time again. 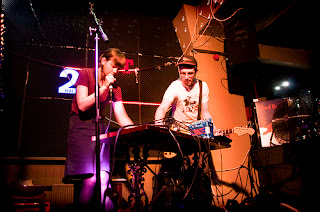