Last night I headed along to Captain’s Rest for the release of the debut EP by Seventeenth Century. I’ve mentioned them a few times in previous blogs and have been following them for over 2-years, so I was delighted to see their hard work over the last two years resulting in a lovely 10-inch vinyl EP, with the follow up already scheduled for April. I’m also pleased that new Glasgow indie label Electra French have added them to their roster, along with Mitchell Museum. I hope that this is the start of a productive label.
The entrance fee last night was a January friendly £3 and the 10-inch vinyl came with a download code, meaning that those that don’t have record players can have nice bit of art to display in their room and still get the mp3’s to play on whatever gadget they have.
Support for the night came from former De Rosa singer Martin John Henry and it was clearly apparent who in the crowd was there to see him and those that were there for the Seventeenth Century. The first two songs didn’t do it for me and if I hadn’t been driving I would have headed up to the bar for a beer. I’m glad I stayed though as things began to pick up considerably with a beautiful song that contained a lyric something like ‘you know I need a map, I don’t know my way around London’ followed by a song introduced as a rarely performed De Rosa song that had a playful guitar riff.
Henry was certainly warming up, introducing a laptop with beats and samples to accompany him and his acoustic guitar. He seemed genuinely pleased to be playing (I don’t know when he last played) and engaged in witty banter with the older people in the audience, while the young teenage girls sitting at the side looked at their watches wondering when Seventeenth Century were coming on. The last 3 songs were highlights, including a stunning song with a hook that went something like ‘You’re a ribbon and I’m a bow’.
Following a short break Seventeenth Century strode quietly on to the stage and a hush fell over the audience. The band consist of Mark Farmer (lead vocals and violin), Ryan Burns (guitar and vocals), Nicholas Grant (bass and vocals) and brothers Michael and Andrew Truscott on drums and trumpet. 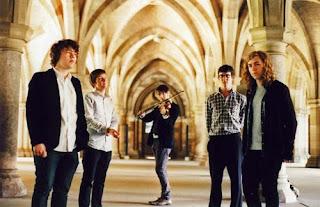 The band quickly demonstrated why there is a bit of a buzz around them by kicking off with a beautiful, short instrumental ‘Amongst Other Things’, allowing them to limber up and it wasn't long before the trumpet and violin began to soar. They then all turned to face the drummer and to those that hadn’t witnessed them live before it must have sounded like they were tuning up, however the melodies and rhythm of ‘Roses In The Park’ appeared, with the band showing off their harmonies and Mark singing with all his heart, as he does every time they play.
The audience were captivated, the teenage girls in front of me mimicked Mark’s flicking of his hair as he got lost in the music. If the NME ever pick up on the band his hairstyle is one that could be replicated around the country. The elder members of the audience nodded approvingly at how tight they were on stage, with one seasoned gig-goer commenting to me at the end ‘they were on the money tonight.’ Nick on bass held things together, allowing vocals, violin, guitar, trumpet and drums to fly upwards and then drop down when required.
From memory there was a song called ‘Bags of Gold’ that I hadn’t heard before, a soaring instrumental, a beautiful ‘Countryside’ and a glorious ‘Young Francis’ that followed, with the last song in particular really demonstrating to any newcomers in the audience how majestic Seventeenth Century can be in full flight. Farmer’s jaw movement as he poured himself into the song with every ounce of soul and emotion in his body reminded me of Kurt Cobain.
During the last song the band jammed furiously with Farmer seemingly hellbent on ripping the strings on his bow to shreds, all of the band roaring along. Having the trumpet, violin and Farmer’s voice on board allows Seventeenth Century to create a unique sound.
Captain’s Rest wasn’t quite full to the brim last night, it being a Tuesday in January after all, but there was a healthy crowd and Electra French will need to start scouting now for a larger venue to accommodate their next EP launch as I expect that the vast majority of people that attended last night will be spreading the word. An outstanding performance.
Posted by everythingflows at 02:53