Aerials Up, the Borderline, London

I’ve been meaning to catch Aerials Up for a while but every time they have been playing in Glasgow I seem to have had something on. The band (formerly known as The Ad’s) seem to have been working hard following their name change, taking on new members (only the singer and bass player were in The Ad’s and they play a completely new set of songs), developing a new sound, racking up some impressive support slots – the Royal Albert Hall with Paulo Nutini! – and generally creating a bit of a buzz. And lets face it Aerials Up is a much better name!

Last weekend they won the ‘Emerging Talent Award’ at the Tartan Clef Dinner (the Scottish Brits?). It was unfortunate that they didn’t get a chance to play, particularly when Joe Elliott from Def Leppard got to play, albeit fronting the Sensational Alex Harvie band.
Anyway, I am digressing. On Tuesday this week I was down in London with work and I was eager to get out and about at night, rather than go to the pub to watch Chelsea or Arsenal in action. Browsing through the Time Out website I noticed that Beach House were playing, but it was sold out, but so were Aerials Up. So I headed along.
The band were headlining a night at the Borderline, slap band in central London. I got there just after the first support act had finished, in time to see Jonathan Jeremiah. I’d never heard of the guy but it turns out he had played on Jools Holland the week before and he is signed to Island Records.
He was joined on stage by 6 friends, with three violinists, a trombone player, beatbox/percussion and a cello. He launched into a song called ‘Happiness’ and his talent was clear to see, at ease on stage, joking with his band (in particular the blonde violinist and I couldn’t blame him for that) and genuinely making it look easy. 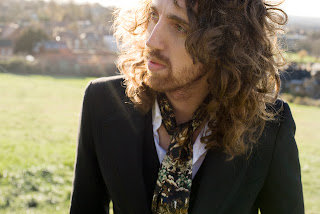 One song in particular recalled Nick Drake, while the majority had a kind of soulful, loose Cat Stevens vibe going on. Quite MOR at times, more soulful at others, but definitely talented.
Upon hearing him announce ‘this is the song I played on Jools Holland last week’ I did wonder why on earth he wasn’t headlining, but the buzz around Aerials Up appears to have carried to London and there must have been a crowd of around 60 to see them.
Aerials Up are also a 7-piece and I was impressed about how quickly they got ready to play! Their violin player was perched precariously on the edge of the stage as they launched into the upbeat opener ‘Stay Awake’. It was an excellent choice of song to get going, ears immediately pricked up as the driving beat, chorus and urgency of the chorus and hook got peoples attention.
It was a very fluid set from the band (the first time I think I have ever used that description). The songs all fitted well together and the on stage chemistry between Kemy (lead vocals and guitar) and Debbie (vocals, glockenspiel and occasional guitar) was excellent. 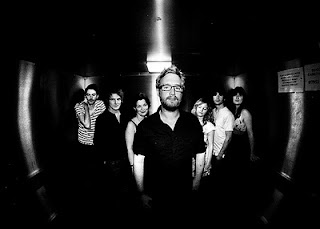 The guitarist looked like he was having a great time, as well as looking about 18 or 19, the drummer was lost in the beat, the bass kept it all together, the cello and violin were a little quite in the mix at times (more suited to some songs than others) and they all got involved with the soaring choruses and hooks.
The band introduced a new song that I didn’t quite catch the title of, it possibly had the word ‘sand’ in it. Anyway, it was excellent and it was swiftly followed by an ‘acapella’ song (with only the tiniest touch of guitar) that showcased the vocal melodies.
A lot of the reviews I have read about Aerials Up have included references to Arcade Fire (possibly justifired on a couple of songs) and somewhat lazily to the Polyphonic Spree (probably largely due to their soaring choruses). I’ve not read anything about Vampire Weekend yet, but the immediacy and (seemingly) simplicity of Aerials Up songs and melodies, not to mention the singers voice, caused me to think of them on more than one occasion. The playful and original guitar riffs also made me think that they must have Vampire Weekend’s albums in their collection.
‘Superglue’ was introduced as the next single and they ended the night with a song that ‘will be the next single after Superglue’.
Aerials Up certainly have a lot going for them, their ability to create playful melodies, inject a change of pace/beat into a song at the right time and the entwining vocals of Kemy and Debbie certainly make them stand out.
To summarise I would definitely go and see Aerials Up again, their set seemed like an album to me, as I mentioned it was very fluid, they have some catchy singles, some more expressive tracks and are not afraid to experiment with their sound or instruments – while at the same time remaining very focused on the sound they want to achieve.
All in all it was a great wee night and my first trip to the Borderline, an excellent wee venue.
Posted by everythingflows at 03:43

Great review! Glad you enjoyed Aerials Up! I've been following them since I saw them open for Paolo at the Royal Albert Hall in April, and I love them.